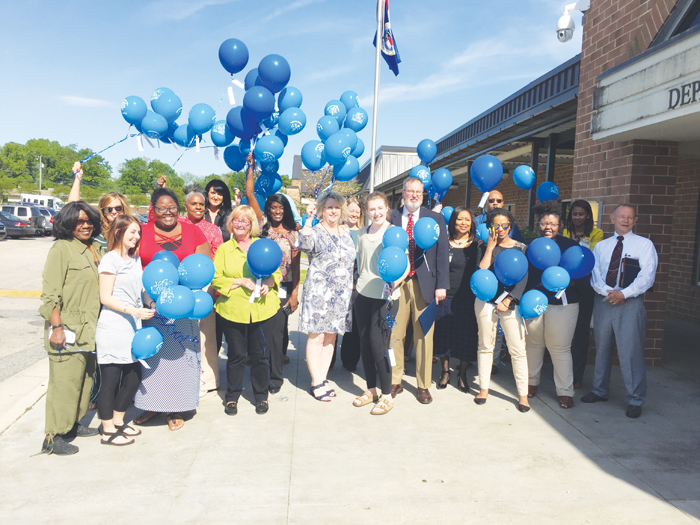 SALISBURY — Clutching a collective 50 balloons, staff and board members of the Rowan County Department of Social Services gathered Tuesday just outside the department’s doors.

The balloons, to be released in observance of Child Abuse Prevention Month, could represent a number of startling Rowan County statistics. The number was just 2.9% of the 1,714 cases of child neglect; 55.6% of 90 physical and emotional abuse cases; and 33.6% of cases of combined abuse and neglect all documented in 2018.

But according to Social Services Director Donna Fayko and program administrator Lisa Berger, the balloons were meant to honor and remember many of the 96 children taken into foster care in the prior year.

“Our goal and mission in the work that we do is to provide safety for children,” said Berger. “We don’t want to be perceived in the community as disrupting families; we’re actually there to assist.”

Assistance meant providing parents and guardians with resources: parenting skills classes, substance abuse treatments and more: “Anything that they may need in order to provide a stable home for their children,” said Berger.

This continued connection to resources is a critical facet to child abuse prevention.

“Child maltreatment occurs when parents find themselves in stressful situations without community resources and (they’re) unable to cope,” said board member Doug Smith, reading a proclamation signed by Rowan County’s Board of Commissioners on April 1. “… The majority of child maltreatment cases stem from situations and conditions that are preventable in an engaged and supportive community.”

Of the 96 children taken into care in 2018, Berger reported that nine were able to reunify with their families. In 32 other cases, custody or guardianship was given to a relative or caretaker.

Twenty-two children found their forever homes through adoption, Berger said, praising the department’s social workers for their efforts to care for Rowan County’s children and families.

Fayko spoke similarly, saying the county could not protect local children without the dedication and hard work of department employees.

Jim Sides, vice chairman of the Social Services board, offered similar thanks in his opening prayer, citing a key factor in their efficacy.

“Many of these (workers) are parents themselves. They understand how important the family unit is,” Sides said.

“It’s the job of us all working together to defend the most vulnerable among us,” he said, paraphrasing a proclamation by President Donald Trump. “Together, we must ensure that children everywhere are treated with dignity and respect and have the opportunity to pursue their dreams in healthy and secure environment.”

Addressing concerns raised by community members, Berger said the balloon release would likely be the last held by the department as it pursues other, more environmentally friendly alternatives for coming observances.

“It’s been a tradition with the balloon release, but we are looking into doing something a little different next year,” she said.

She said the department is exploring the possibility of a butterfly release instead.