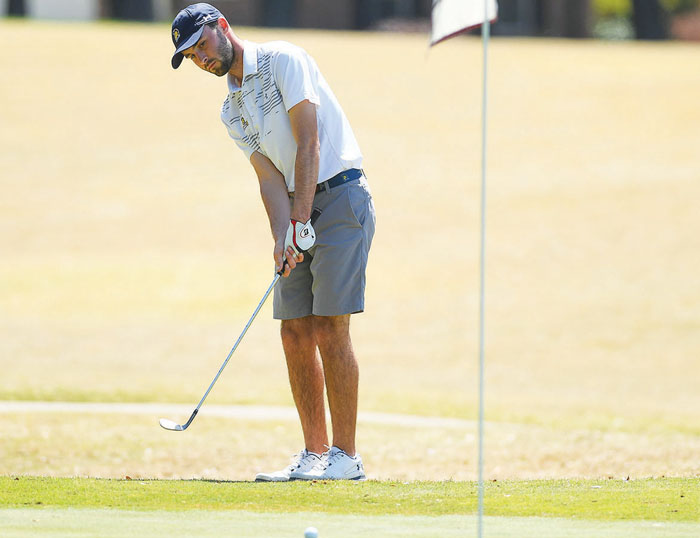 Tim Cowie/UNCG athletics photo ... Nick Lyerly of UNC Greensboro chips near a green during the Southern Conference golf tournament on Monday. Lyerly, of Salisbury, was the individual runner-up, falling in a playoff. He did help lead his team to its second consecutive SoCon championship.

The Spartans finished the tournament at 11-under par (283-294-276), besting East Tennessee State by 12 strokes. It’s the first time in program history that UNCG has won back-to-back SoCon championships.

The victory is the school’s fourth conference title since joining the Division I ranks. It was also the first time the program has won four tournaments in one season, surpassing the three tournament victories in 1994-95.

Sophomore Nick Lyerly (69-69-67) narrowly missed out on his second-straight SoCon individual championship, falling in a two-hole playoff to ETSU’s Shiso Go. Lyerly, of Salisbury and East Rowan High School, forced the playoff with a birdie on No. 18 — his seventh birdie during the final round.

In addition, Lyerly was named the Pinnacle Award winner, given annually to the student-athlete with the highest GPA on the winning team. He is also earned spots on the All-Southern Conference team and the All-SoCon Tournament team.

The team’s score of 276 in the third round was the lowest since the SoCon started hosting the tournament at Pinehurst No. 9, and the lowest round score overall in the conference championship since Georgia Southern and ETSU each carded 275 in 2001.

Fellow sophomore Zack Swanson (68-76-67) finished in third place and was named to the All-SoCon Tournament team after he too carded a 5-under par 67 in the third round. Swanson was 4-under on the back nine.

Senior Bryce Hendrix (74-72-74) finished tied for ninth place after he completed the third round at 2-over par 74. He started the day with 13 straight pars and was selected to the All-SoCon team.

Meanwhile, junior Jonathan Brightwell (72-77-72), finished tied for 10th place after sealing his tournament with an even-par 72 and was the third member of the All-SoCon team from UNCG.

Head coach Terrance Stewart was also named the SoCon’s Coach of the Year.

UNCG will now await its destination in the NCAA regionals during the selection show, which will take place on May 1 at 9 p.m. It will be televised on the Golf Channel.