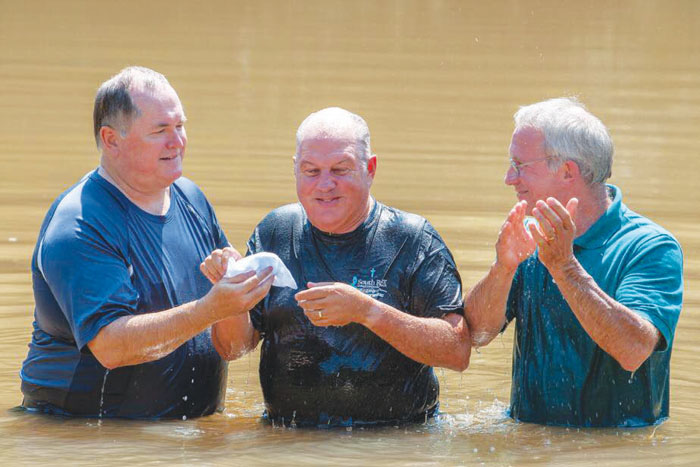 Pilot Guy Maher, center, died Monday after the plane he was flying crashed in a field on Cools Springs Road, Cleveland, just north of Woodleaf. He is shown being baptized last year at his church South River United Methodist. Photo by South River UMC

WOODLEAF — Representatives of a local church and a former employer say a pilot who was killed in a plane crash Monday afternoon was Guy Maher.

Law enforcement officials have not confirmed his identity.

Police investigators said the plane was headed to Twin Lakes Airport in Davie County and took off about 9 a.m. from Statesville Regional Airport.

Officials confirmed that the plane crashed on Cool Springs Road, north of Woodleaf.

Representatives of South River United Methodist Church in Woodleaf identified Maher, a parishioner at the church, as the man who was killed in the crash.

The owner of the plane reportedly authorized Maher to fly it from Statesville Regional Airport. It was supposed to be a 15-minute flight, and the owner watched the plane depart.

The owner planned to pick up the pilot and take him back to Statesville, but when he arrived at Twin Lakes Airport, the plane was not there.

Officials with the National Transportation Safety Board, assisted by investigators from the Federal Aviation Administration, returned to the crash site Tuesday for further investigation.

Local authorities, including the Rowan County Fire Marshal’s Office, firefighters and other emergency responders, spent much of Monday at the crash site.

Wentz said he and his team arrived at 11 a.m. Tuesday to collect remnants of the plane and to investigate environmental conditions including the weather, and aircraft maintenance.

Wentz said investigators found the nose, tail and both wings of the plane.

Investigators will look at Maher’s certification, log books and any training they can ascertain. They will look at the aircraft’s systems and maintenance log books as well as the crash site and communication with air traffic control.

They will gather data in the next few days and write a preliminary report within the next two weeks, Wentz said.

“There was no fire and no explosion,” Horne said. “Much of the plane is in a concentrated area.”

She said many of the firefighters who responded to the crash scene attended the same church as Maher and knew him well.

Rowan County Commissioners Vice Chairman Jim Greene, a Cleveland resident, was a neighbor and friend who said Maher was more than just a pilot. Maher was active in his church and played the organ and piano at South River UMC.

Greene recalled when Maher flew a helicopter a few years ago to the Woodleaf Tomato Festival to let children enjoy seeing it. Greene said Maher was involved in many activities in the community.

“He was the kind of guy you’d like to be around,” Greene said.

Greene provided a tractor to help move some of the wreckage and find the plane’s engine, Horne said.

Anyone with information about the crash is asked to contact the NTSB at 202-314-6100 in Washington or at witness@ntsb.gov.