Boston moves on in NHL playoffs 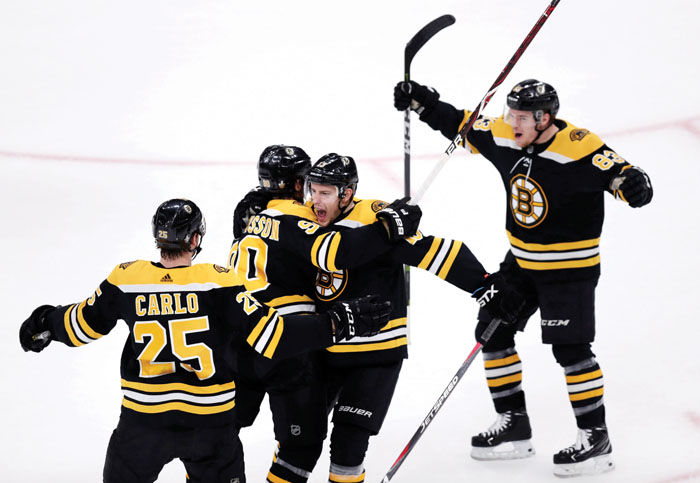 BOSTON (AP) — Another Game 7 matchup between Boston and Toronto, another victory for the Bruins.

Joakim Nordstrom and Sean Kuraly each had a goal and assist, Tuukka Rask stopped 32 shots and the Bruins beat the Maple Leafs 5-1 in Game 7 on Tuesday night to wrap up their first-round Eastern Conference playoff series.

Marcus Johansson added his first goal of the postseason for Boston and Charlie Coyle scored on an empty netter late in the third. Patrice Bergeron also had a late goal.

It is the Bruins’ second straight Game 7 win over the Maple Leafs and third in three playoff matchups between the teams. Boston previously knocked Toronto out of the postseason with Game 7 victories in 2018 and 2013. The Maple Leafs have now lost six straight road Game 7s.

The teams had alternated wins in this series until the Bruins won the last two games.

“I just think the last two games the character of this group shone,” Johansson said. “We earned our way to Game 7 in Toronto and to a win tonight. That’s a good feeling.”

Boston advances to the Eastern Conference semifinals against the Columbus Blue Jackets, starting with Game 1 at home on Thursday night.

Bruins coach Bruce Cassidy said his team benefited from contributions up and down their roster but said Rask may have come up the biggest.

“Generally speaking you need your goaltender to hold you in there,” Cassidy said. “He was outstanding.”

John Tavares had Toronto’s goal on an assist by Tyler Ennis. Frederik Andersen finished with 27 saves.

The Maple Leafs’ loss means there are no Canadian teams remaining in the playoffs. Calgary and Winnipeg previously lost their first-round series.

“It’s disappointing. I thought our series this year compared to last year, we were a way better hockey club. In the end, we weren’t rewarded,” Toronto coach Mike Babcock said.

TORONTO (AP) — Many current NHL players were either not yet born or too young to remember the last time a Canadian team hoisted the Stanley Cup. The drought now stands at 26 years after all three Canadian teams were eliminated in the opening round of the 2018-19 playoffs.

The Boston Bruins defeated Toronto 5-1 in Game 7 of their Eastern Conference quarterfinal on Tuesday night, sending the Maple Leafs into the offseason alongside the Calgary Flames and Winnipeg Jets. The other four Canadian teams did not reach the postseason this year.

The last Canadian team to win the Cup was the Montreal Canadiens in 1993.

The inauspicious streak has been threatened a few times — Calgary, Edmonton and Vancouver each made it to Game 7 of a Cup Final before being eliminated, while Ottawa also made it to a Final —  but this season will mark the eighth straight time two American teams will compete for the iconic trophy. In 2016, not one of Canada’s seven teams even qualified for the playoffs.

What was life like the last time a Canadian team won the Cup? Nokia was the top manufacturer of mobile phones, personal computers were running the Windows 3.1 operating system, social media didn’t exist, “Unforgiven” had just won best picture at the Academy Awards, Janet Jackson’s “The Way Love Goes” topped the Billboard Hot 100 chart and Tiger Woods was two months away from winning his third straight U.S. Junior Amateur Championship.

For the Maple Leafs, it was more heartbreak for a franchise that has failed to advance to the second round of the playoffs since 2004 and has not won the Stanley Cup since 1967.

“It’s the same (awful) feeling as last year,” said Maple Leafs winger Mitch Marner. The Bruins have beaten Toronto in Game 7 in the opening round of the playoffs three of the last seven seasons, including last year.

Calgary entered the postseason as the top team in the Western Conference. Winnipeg had reached the West finals a year ago.

In the end, the Canada curse lived on. Calgary was dumped by Colorado in five games after shutting out the Avalanche in the series opener. Winnipeg lost three times at home in falling to rising St. Louis in six games. The Maple Leafs led their series 3-2 before being ousted.

“You get so used to just being in it every day, competing and keep finding ways to get better and keep pushing forward,” Tavares said.