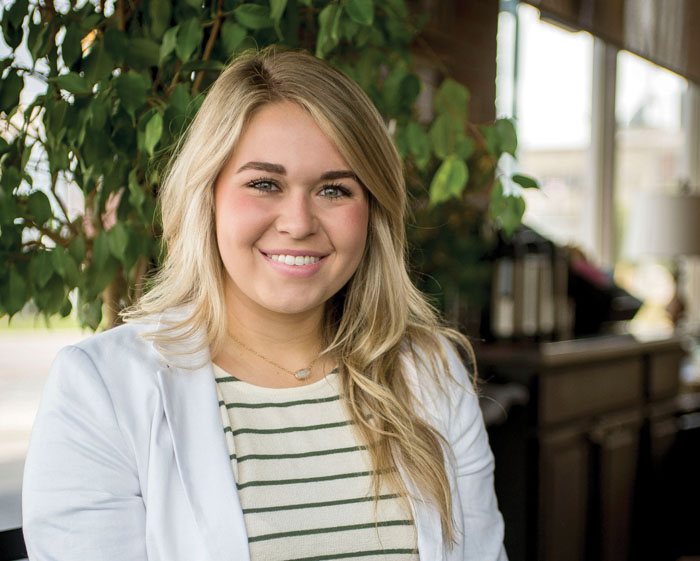 JON C. LAKEY/SALISBURY POST East Rowan high school 2018 graduate Leah Wyrick has hopes that her senior project will become a into a product that can be taken to the manufactoring stage. Wyrick has completed a provisional application for a patent to protect her design and idea of a bra for patients that are recovering from breast surgery. Salisbury, NC 4/19/19

SALISBURY — Salisbury native Leah Wyrick hopes that women nationwide who have undergone mastectomies and other breast-related surgeries will soon be wearing her Resilience Bra.

The 19-year-old Wake Forest University freshman invented the bra after her mother’s breast cancer diagnosis and now has a provisional patent.

“I didn’t think it would go this far,” Wyrick said of the bra.

She saw the struggle her mother, Nancy, endured while recovering from a mastectomy and had some ideas after a conversation with plastic surgeon Dr. Sam Roy.

Wyrick had already been researching breast cancer for her senior project at East Rowan High School, not knowing she’d be sitting in a hospital along with her father, Tim, supporting her mother for the same thing two years later.

Roy, who was already Wyrick’s project mentor, one day discussed the difficulties his patients found with current recovery bras. Many bras on the market were uncomfortable and didn’t provide drain pockets. The drain tubes remove fluid that builds up in the body.

“I don’t think the quality of the bras is paid attention to by the manufacturers,” Roy said.

He said it’s no fault of the manufacturers, but the bras are being worn short-term anywhere from two weeks up to a month.

He said the bra would not just be for breast cancer survivors but all breast surgeries. There were some things that bras on the market now just don’t have, including adjustable straps around the chest and at the shoulder.

“I have patients who have make their own drain holders. The issues are real. I’m a plastic surgeon. Nobody is putting time and effort into these,” Roy said.

Wyrick got the idea to sew a bra for her senior project that would accommodate the elements Roy said were missing in the available bras. The only thing was, she didn’t know how to sew.

In one day, a family friend taught her to sew. The bra she created would later become a prototype for her concept.

Wyrick graduated from high school and the bra sat inside her closet for months until she was chosen from among 100 students to take part in her college’s Startup Lab, offered through the Wake Forest University Center for entrepreneurship program.

“There were 100 groups who pitched their ideas. They asked for 20 to come back, and then they picked 10,” she said.

Wyrick was one of the 10 chosen. She is the only freshman in the program.

The Startup Lab provides mentorship and an opportunity to pitch ideas to business investors.

While in the lab, Wyrick was given seed money to help make her high school project into an actual product. She initially had a hard time finding someone to help her sew it.

Wyrick said she called a number of textile companies, but “nobody made them (bras).” It was suggested she try to find a seamstress on Craigslist, which she did. Wyrick connected with a Lexington seamstress who helped her with three prototypes.

The bra is designed to be fashionable and help women with breast cancer have a more comfortable recovery.

Wyrick recently pitched her idea to 600 potential investors and hopes to secure a deal with an investor to garner capital to produce the bra and secure a permanent patent. Her provisional patent is good for one year.

“My goal is to take this and run with it,” she said.

While she took a full course load, grew her idea and worked to go into unchartered territory as an entrepreneur, her parents supported her along the way, even ensuring her patent form was prepared correctly.

The name of her company came about one day while at home with her parents. She needed a name to go along with her pitch, and online name generators didn’t lend themselves to anything that Wyrick liked.

She recalled a sign at their home with the Bible verse, “And if one prevail against him, two shall withstand him; and a three-strand cord is not quickly broken,” and the name of her company was born.

“That Bible verse represents power and strength,” she said.

The invention has changed the trajectory of Wyrick’s life. She changed her major from premed to business with a minor in entrepreneurship.

“It’s overwhelming. She keeps knocking on doors. She’s very impressive for a young person; for anybody who wants to keep pursuing this,” Roy said.

“She has a reason to want to help women. This is more than just a business opportunity. It’s so people like her mom don’t have to go through it,” Roy said.

She said the high school program helped her tremendously with public speaking, interviewing and other skills.

Wyrick said her hope is that with the bra, women will be resilient.

“If I could help one person, it would be worth it,” Wyrick said.

Wyrick has created a GoFundMe page to help get the Resilience Bra manufactured.

For more information about the Resilience Bra and Three Strands Recovery Wear, visit Wyrick’s website via the funding site, https://www.gofundme.com/three-strands-recovery-wear.

Rowan’s Dana Cooke has the inside track on return…