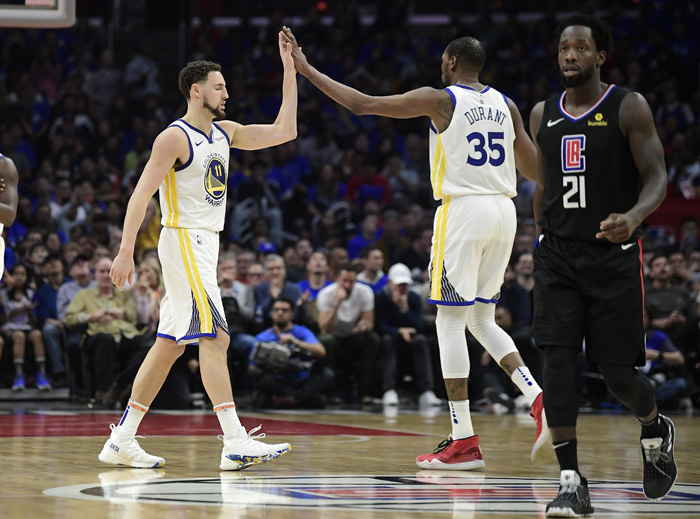 LOS ANGELES (AP) — A little scoreboard watching inspired Klay Thompson and Golden State. Seeing Houston up 3-0 on Utah combined with having dropped a game at home, the Warriors got back to business.
Kevin Durant scored 33 points and Thompson added 32 in a 113-105 victory over the Los Angeles Clippers on Sunday that gave the Warriors a commanding 3-1 lead in their first-round playoff series.
“We came in with that mindset to put our foot on the throttle and not let go,” Thompson said. “We let go in Game 2 and we won’t do that the rest of the playoffs. I really believe that.”
After a quiet 12 points in Game 3, Thompson broke out for 27 points by halftime, when Durant had 19.
“In the first quarter, we really didn’t need to do anything special. Klay was just amazing. K.D. was consistent the whole game,” Stephen Curry said. “For us, obviously with the threats we have out there, it is just a matter of trying to be as patient as possible.”
Curry’s patience was tried as he missed his first six shots and was in foul trouble for the second straight game before finishing with 12 points. Andrew Bogut fouled out with 5:50 remaining in the game with eight points and 10 rebounds.
Game 5 is Wednesday in Oakland, when the two-time defending champions could close out the series.
The Warriors were 17 of 19 from the free throw line. They controlled the boards, 49-33, led by Curry and Bogut with 10 rebounds apiece.
“The rebounding really hurt us again,” Clippers coach Doc Rivers said. “Right now they are crushing us on the glass.”
Coming off a 27-point loss in Game 3, the Clippers played tougher defensively and hung in after trailing by 11 in the second quarter.
They outscored Golden State 30-25 in the third when they rallied to take a five-point lead. But Curry scored seven of the Warriors’ final 10 points to send them into the fourth ahead 87-84.
“This team was just looking for a crack,” Durant said of the Clippers. “They don’t stop. Even when you go home after the game you’re going to be thinking of them because they’re tough.”
The Clippers narrowed it to 87-86 early in the fourth, but Thompson sank his sixth 3-pointer and the Clippers never got close the rest of the way.
Rookie Shai Gilgeous-Alexander led the Clippers with a career-high 25 points. Danilo Gallinari added 16 points but was just 5 of 20 from the floor. Patrick Beverley had 12 points and 10 rebounds.
“He played with no fear,” Durant said of Gilgeous-Alexander, “and that’s what kept them in the game most of the game.”
Super subs Lou Williams and Montrezl Harrell were held to 12 and 10 points, respectively. They were limited to a combined eight points in the second half.
“We hadn’t been able to get everyone on the same page and to have good games on the same night,” Williams said. “My success has been predicated on everyone playing well and we just haven’t been able to get that going.”
The Clippers opened the second on a 13-3 run to tie it 35-all, but Thompson made two free throws that put Los Angeles down 10 later in the quarter.
The Clippers closed within four but Durant completed a four-point play to stretch the lead to eight points at halftime.

CURRY’S FOULS
Curry had five fouls in Game 3 and piled up four in Game 4.
He had written the words “no” on one shoe and “reach” on the other.
“He didn’t reach as much tonight so that was good,” coach Steve Kerr said. “Steph sometimes loses focus. He’s such a fascinating player. The same thing that makes him not hesitate to shoot a fadeaway 30-footer maybe is the same thing that gets him in foul trouble. He’ll be fine.”

UP NEXT
Game 5 is Wednesday at Oracle Arena.
___
More AP NBA: https://apnews.com/NBA and https://twitter.com/AP_Sports