Two in a row for the Red Sox; Braves rally for a split 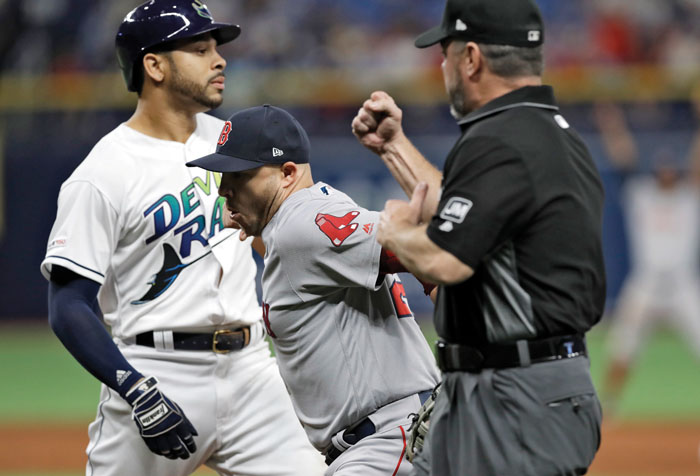 RED SOX 6, RAYS 5
ST. PETERSBURG, Fla. (AP) — Andrew Benintendi hit a grand slam and a tiebreaking ninth-inning sacrifice fly and catcher Christian Vázquez picked off Tommy Pham for the final out as Boston won a series for the first time this season.
Boston had lost four of its first six series and split the other two during a 6-13 start, its worst since 1996.
Rick Porcello gave up two runs and six hits in 5 2/3 innings, Matt Barnes (2-0) won after allowing Yandy Diaz’s tying home run leading off the eighth, and Ryan Brasier got his fifth save in six
Boston went ahead in the ninth against José Alvarado (0-1) after Jackie Bradley Jr. singled leading off. Michael Chivas doubled, and Benintendi followed with his go-ahead fly.
Tampa Bay had won its first six series of the season. The Red Sox won consecutive games for just the second time this year.

INDIANS 8, BRAVES 4, GAME 1
BRAVES 8, INDIANS 7, GAME 2
CLEVELAND (AP) — Corey Kluber working seven solid innings and Carlos Santana celebrated his U.S. citizenship with three hits, as Cleveland topped Atlanta in the opener of a doubleheader.
Kluber (2-2) shook off a rough first inning and allowed four runs and five hits. He didn’t get out of the third inning in his previous start.
Max Moroff homered and had two RBIs for Cleveland. Greg Allen hit a run-scoring double off starter Julio Teheran (2-2) and the Indians scored six runs in the fifth — all with two outs.
Brian McCann and Matt Joyce hit back-to-back homers off Kluber in the seventh. The Braves, who have lost four in a row, had just six hits.
In the second game, Ronald Acuña Jr.’s two-run double highlighted Atlanta’s five-run rally in the ninth inning as the Braves stormed back to gain a split.
The Braves trailed 7-0 after two innings but chipped away late and stopped a four-game losing streak.
Acuna ripped his double to left on the second pitch from Cody Anderson, who was seeking his first big league save. The Braves also got a two-run single by Ozzie Albies and a bases-loaded walk to Freddie Freeman in the inning before Acuña came through after going hitless in his previous six at-bats.
Luke Jackson (2-0) pitched the eighth, and A.J. Minter struck out the side in the ninth for his second save.
The Indians welcomed back All-Star Francisco Lindor, who finally made his season debut. Lindor returned after missing 19 games with an ankle injury, and went 1 for 5 with a run scored.

NEW YORK (AP) — All-Star slugger Aaron Judge hurt his left oblique while taking a swing and was expected to head to the injured list as the already banged-up New York Yankees beat the Kansas City Royals 9-2 Saturday.
Judge homered early, but hurt himself in the sixth inning while hitting a single. He was taken to a hospital for an MRI and further tests.
Judge winced after taking a swing in the sixth and gingerly made his way to first base. He left the game after being checked by a trainer.
The Yankees, who began the game with 12 players on the injured list, hit four home runs. Judge connected in the first, Clint Frazier had a solo drive in the second and Mike Tauchman and DJ LeMahieu homered on consecutive pitches in the fourth.
Judge and Frazier hit their fifth homers of the season in the opening two innings off Heath Fillmyer (0-1).
Masahiro Tanaka (2-1) pitched seven innings of one-run ball.
Chris Owings homered in the ninth for Kansas City.
BREWERS 5, DODGERS 0
MILWAUKEE (AP) — Christian Yelich hit two home runs, pushing his major league-leading total to 13, and Chase Anderson pitched five strong innings in a spot start in Milwaukee’s win over Los Angeles.
Ryan Braun added a three-run homer for the Brewers, who snapped a three-game losing streak.
The Brewers, who ended the Dodgers’ six-game winning streak, got on the board in the third when Yelich hit a solo homer with two out off Hyun-Jin Ryu (2-1). With that homer, Yelich broke the franchise record for home runs in March and April, set by Eric Thames in 2017. His second came in the sixth inning, and his 13 homers in the first month of the season matched the franchise record for homers in a month, set by Prince Fielder in May 2007.
Anderson (2-0) allowed a single to open the game and then retired 15 of the next 17 batters before being lifted for a pinch hitter. He walked two batters and struck out five.
Alex Claudio, Junior Guerra and Matt Albers combined to pitch four innings of one-hit relief.