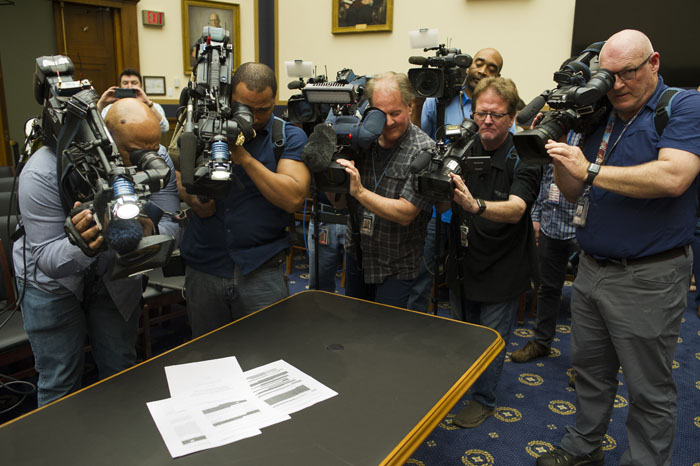 WASHINGTON — It’s now up to Congress to decide what to do with special counsel Robert Mueller’s findings about President Donald Trump.

While the special counsel declined to prosecute Trump on obstruction of justice, he did not exonerate him, all but leaving the question to Congress. Mueller’s report provides fresh evidence of Trump’s interference in the Russia probe, challenging lawmakers to respond. The risks for both parties are clear if they duck the responsibility or prolong an inquiry that, rather than coming to a close, may be just beginning.

“The responsibility now falls to Congress,” said Rep. Jerrold Nadler, D-N.Y., chairman of the House Judiciary Committee, which has the power to launch impeachment proceedings.

On Friday, Nadler issued a subpoena for Mueller’s full report.

House Speaker Nancy Pelosi has insisted on a methodical, step-by-step approach to the House’s oversight of the Trump administration, and she refuses to consider impeachment without public support, including from Republicans, which seems unlikely. But in light of Mueller’s findings, Democratic leaders are under mounting pressure from the party’s rising stars, deep-pocketed donors and even a presidential contender to seize the moment as a jumping-off point for trying to remove Trump from office.

Speaking Friday in Belfast as she wrapped up a congressional visit to Ireland, Pelosi declined to signal action beyond Congress’ role as a check and balance for the White House.

“Let me assure you that whatever the issue and challenge we face, the Congress of the United States will honor its oath of office to protect and defend the Constitution of the United States to protect our democracy,” she told reporters. “We believe that the first article — Article 1, the legislative branch — has the responsibility of oversight of our democracy, and we will exercise that.”

That approach isn’t enough for some liberals who see in Trump’s actions not just a president unfit for office but evidence of obstruction serious enough that Mueller said he could not declare Trump exonerated.

How far lawmakers will go, though, remains unclear. Republicans are eager to push past what Trump calls the “witch hunt” that has overshadowed the party and the presidency. And while Democrats say Mueller’s findings are far more serious than initially indicated in Attorney General William Barr’s four-page summary, they’ve been hesitant to pursue the ultimate step.

Biding their time, Democrats are putting the focus on their next investigative steps. Nadler has summoned Mueller to testify. And next week, both the House and Senate are scheduled to hear from Barr, whom Democrats accuse of distorting the report’s contents to Trump’s benefit.

But it’s unlikely that the full Mueller report or the public testimony will untangle the dilemma that Democrats face. Mueller laid out multiple episodes in which Trump directed others to influence or curtail the Russia investigation after the special counsel’s appointment in May 2017, and Trump made clear that he viewed the probe as a potential mortal blow — “the end of my presidency.”

The special counsel wrestled with what to do with his findings, unable to charge or exonerate, and sided with the department’s guideline that indicting a sitting president would impair the ability of the executive branch to function.

“We concluded that Congress has authority to prohibit a president’s corrupt use of his authority in order to protect the integrity of the administration of justice,” the report said.

Rep. Adam Schiff, chairman of the House Intelligence Committee, said the acts described in the report “whether they are criminal or not, are deeply alarming in the president of the United States. And it’s clear that special counsel Mueller wanted the Congress to consider the repercussions and the consequences.”

Schiff said, “If the special counsel, as he made clear, had found evidence exonerating the president, he would have said so. He did not. He left that issue to the Congress of the United States.”

Republicans sought to portray Democrats as unwilling to let go of the idea that Trump colluded with Russia to swing the election. “What you’re seeing is unprecedented desperation from the left,” tweeted Rep. Mark Meadows, R-N.C., a top Trump ally. “There was no collusion. It’s over.”

Other Republicans were more measured. Senate Majority Leader Mitch McConnell, who is one of the few members of Congress mentioned in the report, told reporters in Kentucky, “It’s too early to start commenting on portions of it.”

McConnell was among several people the report said former White House Counsel Don McGahn had reached out to on behalf of the president when Trump was trying to stop then-Attorney General Jeff Sessions from recusing himself at the start of the Russia probe.

In all, the report revealed 10 areas of potential obstruction, from Trump’s firing of FBI Director James Comey to his attempts to thwart Mueller’s investigation. In many cases, the additional details show a president restrained only by aides and others around him.

“If we had confidence after a thorough investigation of the facts that the president clearly did not commit obstruction of justice, we would so state,” the report says. “However, we are unable to reach that judgment. The evidence we obtained about the president’s actions and intent presents difficult issues that prevent us from conclusively determining that no criminal conduct occurred.”

Mueller’s team hewed to department guidelines. “We recognized that a federal criminal accusation against a sitting president would place burdens on the president’s capacity to govern,” the report said. “We determined not to apply an approach that could potentially result in a judgment that the president committed crimes.”

For Democrats, those pages amount to a green light to finish what Mueller started.

Rep. Jamie Raskin, D-Md., a member of the Judiciary Committee, said his reading of the report shows that Trump “almost certainly obstructed justice” and it was only his staff intervened to prevent certain actions.

“We have a very serious situation on our hands,” he said. “It’s an awesome and solemn responsibility that Congress has now to try to deal with the crisis that’s contained in this report.”

But what comes next may not be any more conclusive, especially as Democrats say they are unwilling to consider impeachment without bipartisan support from Republicans. The investigations may provide a steady stream of revelations that damage the president while also firing up his supporters to his defense as he gears up for re-election. Or the probes could push Congress further than many now are willing to go.