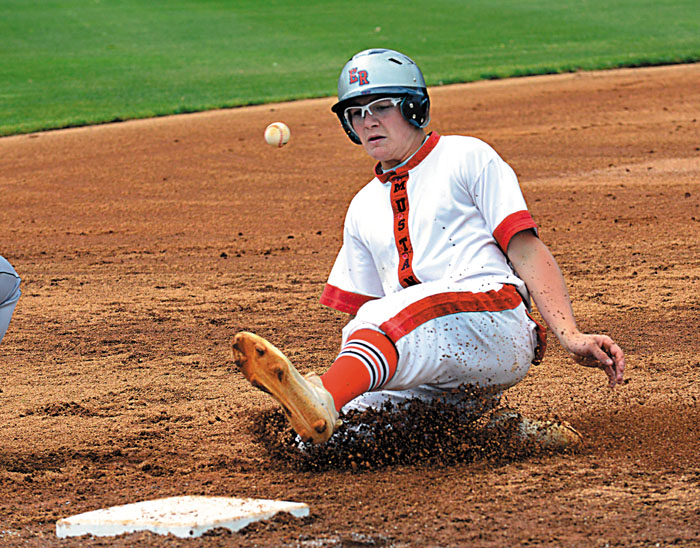 Wayne Hinshaw/for the Salisbury Post ... East Rowan’s Bryson Wagner slides into third base, beating the ball there for a triple, during Saturday morning’s high school baseball game against Forest Hills. East won, 10-0. The game was the opening contest a spring break tournament at Staton Field in Granite Quarry.

GRANITE QUARRY — It’s not hard to take the temperature of a team that’s won five of its last six games.

Even on a chilly Saturday morning at Staton Field, East Rowan’s baseball team turned up the heat in an abbreviated, 10-0 victory over Forest Hills.

“There was a lot of confidence here today,” winning pitcher Bryson Wagner said, moments after East (12-9) kicked off its own spring break tournament with a five-inning shutout. “Their pitcher threw strikes and we attacked fastballs. We’re all starting to hit the ball and everybody seems to be coming around.”

Including Wagner, who pitched one-hit ball over four innings and delivered two of East’s six extra-base hits. Teammate Charlie Klingler smashed a leadoff triple to open the last of the first and added a pair down-the-line doubles — one to left field, one to right. Jake Hunter contributed a two-run single in the third and Wayne Mize knocked in three runs, including the game-ender with two away in the bottom of the fifth.

“We came out today and hit the ball hard,” said substitute East coach Brett Hatley. “And we had that big inning, which really helped. We were a little more relaxed, playing in the Easter Tournament, school’s out for a while. Our guys looked comfortable at the plate.”

Hatley coached in place of Brian Hightower, who missed the game due to an unspecified personal issue. Losing coach Stewart Redding described East as “a good-hitting team,” and added: “Well, they swung it good against us.”

East finished with 10 hits and easily handed Forest Hills (2-18) its 11th straight loss. The Mustangs opened the scoring in the first against Forest Hills junior Travis Horne, who yielded Klingler’s first-pitch triple and Wagner’s double to the left-field wall. Two innings later — after East used two hits and an outfield error to load the bases with one away — Hunter rammed a single to left for a 3-0 lead.

“We didn’t get any better today,” said Redding. “Our pitchers did a good job, but we failed to catch an infield pop-up and our center-fielder absolutely whiffed on another ball. We shot ourselves in the foot.”

East cracked the game open and chased Horne in the bottom of the fourth inning. Ten Mustangs came to bat and six scored. There was an infield hit by Jake Holshouser, Klingler’s second double of the game and a two-run single by Mize that provided a 5-0 advantage. Teammate Blake White coaxed a bases-loaded walk and Corbin Durham hoisted a sacrifice fly. Two other runs crossed on Forest Hills errors.

Mize, who grounded his first hit through a drawn-in infield, was the first batter to face relief pitcher Hunter Phifer. “I was trying to keep the ball in the middle of the field,” he said. “And just drive it toward the outfield because their infield was in.”

In the meantime, Wagner pitched with guile and purpose on the mound. The right-hander retired 12 of the 13 hitters he faced, allowing only an unfortunate, third-inning single to Forest Hills’ Ashton Shoaf. Shoaf’s lazy grounder down the first-base line struck the bag and bunny-hopped into shallow right field.

“Kind of a freak accident,” Wagner said, after recording eight strikeouts in his first varsity start. “Hit the bag and bounced into the outfield, but I just kept throwing strikes. I had my stuff today.”

Klingler, East’s junior catcher, affirmed as much. “He filled up the zone and had really good command,” he said. “Every pitch we called, he’d hit his spot. He found a rhythm.”

Wagner also had what many consider a pitcher’s best friend — late movement on his two-seam fastball. “That baffled us first time through the lineup,” said Redding. “That late tail action coming in toward right-handed batters got us a few times.”

East’s final rally began after Phifer retired two batters in the last of the fifth. Wagner lined a triple to the right-center gap and scored the game’s final run when Mize drilled a double to left-center.

“No game is an easy game,” Klingler said, after scoring three times. “But this one, we got the ball rolling right from the start and kept going.”