’Canes pounded in Washington by Caps, 6-0 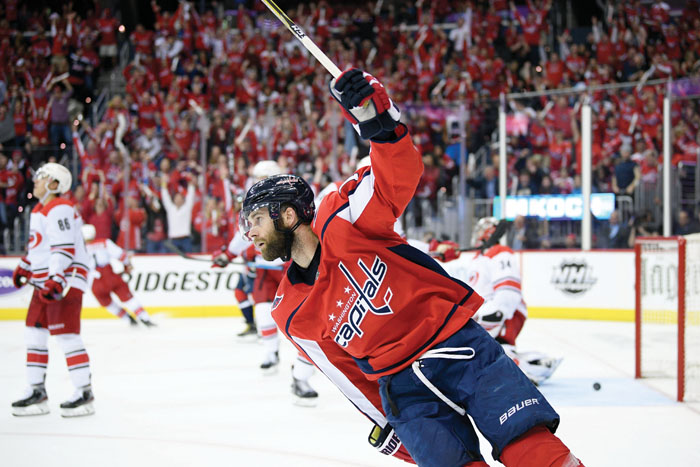 WASHINGTON (AP) — Nicklas Backstrom needed five games to match his goal output from the entire 2018 playoffs, and he and Alex Ovechkin have the defending Stanley Cup champion Capitals one victory away from the second round.

Backstrom had two goals and two assists, Ovechkin had a goal and two assists and Braden Holtby stopped all 30 shots he faced to lead Washington to a 6-0 win over the Carolina Hurricanes in Game 5 on Saturday night.

Washington has a 3-2 series lead and can advance with a win at Carolina in Game 6 on Monday night.

After scoring five goals in 20 games during the Capitals’ Cup run a year ago that included missing four games with two fractures in his right pointer finger, Backstrom has that many already in these playoffs. Ovechkin assisted on Backstrom’s second goal and Tom Wilson’s on the power play and added the exclamation point in the rout with a power-play goal in the third.

Lighting up Carolina’s Petr Mrazek fired up the crowd and gave Washington the lead in the series back after laying an egg in losses in Game 3 and Game 4 on the road. Much of the credit belongs to the penalty kill that made easy work of all five Carolina power plays, including three in quick succession in the second period.

Holtby made six saves on the penalty kill and drew chants of his name from the crowd that was in a chanting mood all night. “D-S-P! D-S-P!” roared throughout the arena to salute 2018 playoff hero Devante Smith-Pelly, who was playing his first game with the Capitals since Feb. 17 after spending the past two months in the minors in a salary-cap move.

Smith-Pelly filled the spot vacated by T.J. Oshie, who suffered an upper-body injury late in Game 4 and is expected to be out long-term. When the game was out of hand, fans chanted “T.J. Oshie!” to honor a popular player who was a significant part of the franchise’s first title.

Most importantly, Brett Connolly scored his first goal of the series and Nic Dowd scored on a penalty shot to give Washington the secondary scoring it had been lacking even with Oshie in the lineup.

Mrazek allowed six goals on 28 shots but was largely hung out to dry. Washington went 2 for 3 on the power play, while Carolina came up empty on several opportunities that could have changed the course of the game. Instead, the Capitals moved one step closer to facing former coach Barry Trotz and the New York Islanders.

NOTES: The team that scored first has won each game of this series. The home team has also won each game. … The Capitals improved to 11-3 this season without Oshie. … Carolina F Aleksi Saarela became the first player in Hurricanes/Hartford Whalers franchise history to make his Stanley Cup playoff debut before appearing in a regular-season game. Saarela replaced Jordan Martinook (lower-body injury) in the lineup. … LW Andrei Svechnikov took part in the Hurricanes’ morning skate and said he hopes to play in Game 6 after being concussed in a fight with Ovechkin in Game 3. … F Micheal Ferland missed his second consecutive game with an upper-body injury.

The Hurricanes could set another arena attendance record Monday when they look to stave off elimination in Game 6.

The Blues will next face the winner of the Dallas-Nashville series, which the Stars lead 3-2.

Bryan Little and Dustin Byfuglien scored for Winnipeg, which tried to rally after falling behind 3-0 early in the third period. Connor Hellebuyck finished with 33 saves.

The Blues became the first home team to win in the series, and advanced to the second round for the third time in four years.

NASHVILLE, Tenn. (AP) — Alexander Radulov and Jason Dickinson each scored twice to help Dallas to push Nashville to the brink of elimination.

The Stars came into the postseason as the West’s first wild card and are up 3-2 in the best-of-seven series over the two-time defending Central Division champs. Dallas will have a chance Monday night at home in Game 6 to join Colorado and Columbus as the latest lower seed coming through in the opening round.

Tyler Seguin had a goal and an assist, and Jamie Benn had three assists as the Stars scored at least five goals in back-to-back playoff games for the ninth time in franchise history, and the first since Games 3 and 4 of the 1991 conference finals when this team was still in Minnesota.

Ben Bishop, named a finalist for the Vezina Trophy during the game, made 30 saves for the win.

Rocco Grimaldi, Ryan Johansen and Kyle Turris scored for Nashville, and Pekka Rinne finished with 21 saves. The Predators lost back-to-back playoff games for the first time since Games 5 and 6 of the 2017 Stanley Cup Final.