Bill Burgin: ‘You never want to hear somebody tell you that you have cancer’ 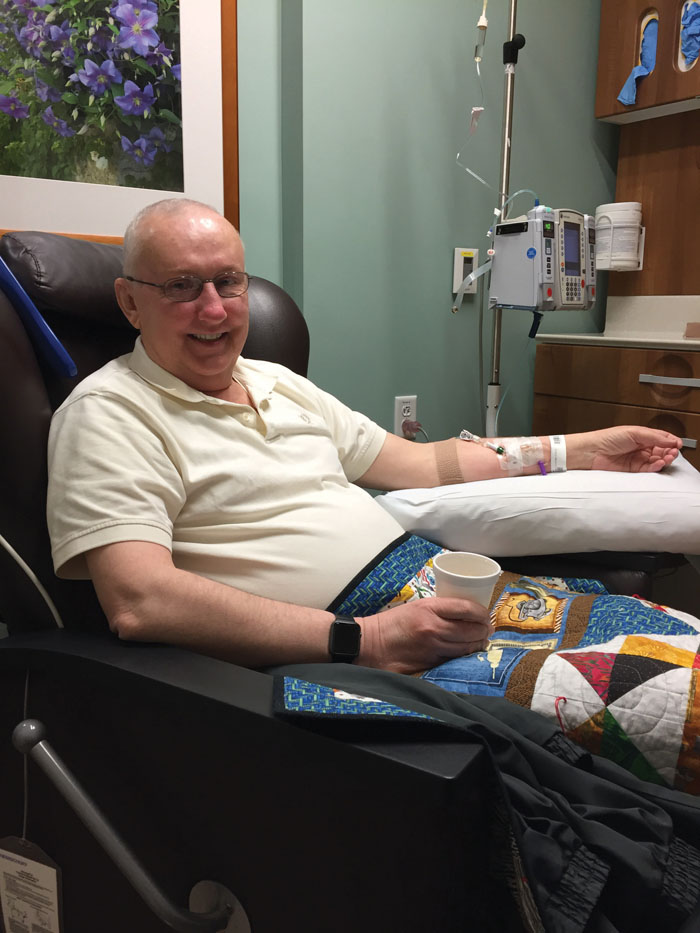 Bill Burgin takes his last chemo treatment. The quilt was made by members of St. Francis Methodist Church in Cary. 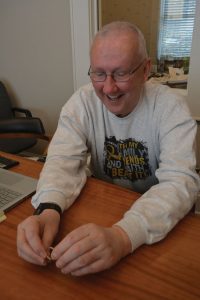 Bill checks the date on his wedding ring. He and his wife, Becky, got married in 1973.

About every six months, Diana Myers stood up in her Sunday school class at Milford Hills Methodist and announced, “Men, it is time to do your PSA.”

She had good reason. Her husband, Eddie, died of the disease 13 years ago.

One of the guys in the class, Bill Burgin, took Diana’s advice to heart, and it saved his life.

Now he is standing up, talking to you.

He’d had regular PSAs until he was 62, then stopped. But two years ago, he asked for a PSA as part of some routine blood work. His diagnosis was Sept. 15, 2017, with a PSA of 7. A normal reading should be under 4.

“You never want to hear somebody tell you that you have cancer,” he notes.

The first person he had to tell was his wife, Becky, also 66. They’ve been married since 1973. He then called their daughter, Leah Staley, 38, who lives in Raleigh, and works in Research Triangle Park, and drove to Apex to see their son Jeremy, 43, a police officer for the Town of Cary.

Because of his profession, Jeremy knew something was wrong since his dad came to visit.

Bill told his son, “This is not what’s gonna kill your daddy.”

Bill realized later maybe he shouldn’t have said that. “But in fairness to me, I needed him on his A game.”

He called his brother, Bob, in Greensboro.

“How do you feel?” his brother asked him.

“The same as I did yesterday,” Bill said.

“I didn’t have any pain, and I didn’t have any symptoms,” Bill says. “I just had this number. It was an interesting question. Cancer changes the way people feel about themselves, and it shouldn’t.”

Becky says she tried not to get upset, because she knew her husband was worried.

“It just doesn’t pay to get too excited until you know where you’re going,” she says. “It never was too big to handle.”

Bill weighed his options, and decided on robotic surgery at Duke, since their children live nearby. He then decided to have radiation, because they thought the cancer was contained at that point.

His surgeon was Dr. Thomas Polascik, referred by his local urologist, Dr. Robert Bertram. He is also a classical pianist.

“If you’re doing robotic surgery,” Bill notes, “you want someone who can watch the screen. God put me in front of him.”

His surgery was scheduled for Jan. 18, 2018, but there was a blizzard on that Thursday. Bill didn’t want to wait any longer, so his surgeon, for the first time ever, did the surgery two days later, on a Saturday.

In the operating room, Bill says he felt like Arnold Schwarzenegger in “Total Recall.”

Four hours later, Bill woke up in recovery with his brother beside him.

He felt OK, and spent one night in the hospital. Bill and Becky have already bought a retirement home in Apex, and the first night there was rough, he says. His core was sore from the probes used for the surgery. But he felt better after that first night, and progressively better until two weeks later — when he got the flu. His white count was high, so he had to be readmitted to the hospital. He had a UTI from the catheter, so it was removed. Bill was grateful, and was successfully treated for flu.

He recovered and saw his general practitioner, Dr. David Caron, in Granite Quarry, 40 days after surgery. His PSA should have been 0. It was 2.3. It was not a good sign.

He immediately went back to his urologist, who did another PSA and got the same result.

“What does it mean?” Bill asked.

“It means there’s still something there,” he said.

Yet they thought surgery had been 100 percent successful, with negative margins and no lymph node involvement.

“The cancer had broken through,” Bill says. “And I could not have waited another day.”

His Duke oncologist, Dr. Tian Zhang, figured he had some “jumpers,” a scattering of cells that were still in his body.

Bill wanted to think about it, and saw Dr. Mark Wimmer, a Salisbury oncologist.

You’ll tolerate it, Bill was told. But it will not be fun.

He decided to go for it, taking two hormone treatments beginning in June 2018, which would “freeze” the cancer cells. The radiation would then kill it. He had to go off one hormone because of a rash, but tolerated the other fine. He had hot flashes and night sweats.

“I would cry at anything,” Bill admits. “I couldn’t watch the St. Jude’s commercials or the commercials with the abused dogs.”

He drove two hours from Salisbury to take a two-minute treatment, then drove back.

“Part of my formula was to be as normal as possible,” Bill says. “I got better at it. I’d drop by on the way out of town and get a Cheerwine slushy. It kept me awake down there and back.”

He had no side effects from the radiation.

“I credit God for carrying me through,” he says.

At one point, he even wondered if he was getting enough radiation. He was assured that he was. In late summer, four weeks after radiation ended, he started six treatments of chemo infusions, three weeks apart.

He felt those side effects.

His Salisbury oncologist had told him it would be a 4 out of 10.

“Even a 4 on the Wimmer scale will kick your butt,” he admits.

He didn’t have any mouth sores, and he didn’t have any nausea, although he carried a bottle of pills with him. He never lost his hair. He did have the bone pain associated with chemo treatment, which usually happened about three days after treatment. He’d take the next two days off, then come back to work.

Before the fifth treatment, he said a prayer.

“God this is the fifth,” he said. “I can do the sixth. But this one is hard. How about you carry me through?”

But the sixth was hard, too, he admits.

He’s still getting over the chemo, he says, but didn’t let his treatments interfere with his service as United Way president in 2018.

“He never complained,” says Jackie Harris, associate director. “He kept on, no matter what. He is just that type of person. He’s loyal to United Way and always has been.”

He remains on the United Way board.

The saying on the sweatshirt Bill is wearing this particular day is indeed true, “With my family, friends, and faith, I beat it.”

As for Diana, she’s thankful Bill is healthy. “Our class has said many prayers for him.”

So has David Treme, who worked closely with him as city manager when Bill served on City Council.

“Bill is a person of faith,” David says. “We prayed for health and healing and wholeness. We prayed for his physical strength to go through treatments. I was amazed at his complete trust and confidence of putting himself in God’s hands.”

“He has many great qualities, but his number-one quality is integrity. He is a servant leader. That is the foundation of his leadership. He certainly lives his faith.”

Susan Kluttz found that out when the two served on City Council together.

“He didn’t push his religion on you,” the former mayor says. “He was Christian in everything he did. It was a great advantage to have an architect on the council. We were doing so much. We were moving along at lightning speed. His professional knowledge as a council member was tremendous. I’ve always had the greatest respect for him. I am his greatest admirer.”

Becky says her husband did not want people to feel bad for him.

“With trusting in God and the medical community, you can’t get too far down,” Becky says.

And it seemed like the whole community was behind him, she says, both in Salisbury and at their new church in Cary, St. Francis United Methodist Church. Bill continues to receive notes from friends.

Bill and Becky’s family, Christmas 2017. They have an adult son and daughter, and five grandsons, now ages 2-13.

Becky continues to split her time in Salisbury — where she’s getting ready to put their home on the market — and Apex, where they both spend time with their five grandchildren, all boys, ages 2 to 13.

“With his treatments, we’ve spent more time together,” Becky says. “When we’re together, we do a lot of laughing. We have these fabulous grandchildren to keep us happy, so it’s wonderful for us to be here in Apex. Bill is a very kind person, and this has made him appreciate people more.”

And men, he’d sure appreciate it if you’d keep having your regular PSAs.