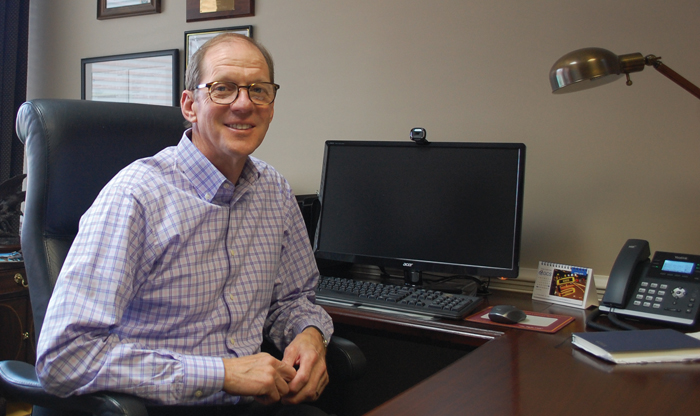 Greg Alcorn, the founder and CEO of Global Client Services, sits in his office on South Main Street in Salisbury. Alcorn authored “7 Dumb Things We All Say” to help others become better conversationists.

SALISBURY — Greg Alcorn, founder and CEO of Global Contact Services, wants people to be more aware in conversation, including himself.

He wrote “7 Dumb Things We All Say” to help others be better communicators. The book lists using bad bookends, starting with wrong first words, not choosing your words well, poor questioning and bad listening, a focus-on-me attitude, the wrong tone, and not diffusing difficult drama as the seven “dumb things.”

Alcorn describes the book as an autobiography derived from his personal experiences.

“We just don’t speak perfectly all the time,” Alcorn said. “We’re not a world-class listener all the time. But I want to be.”

The secondary title is “Smart Ways to Improve Every Relationship,” which Alcorn says refers to having deeper conversations.

One example, he said, is a time he was talking to a Catawba College student and he asked an open-ended question, which can sometimes be risky. He could have asked the student about his major and multiple other questions. Instead, Alcorn asked the student to tell him about himself. Alcorn learned he was a volunteer firefighter and a double major and that he grew up 16 miles away.

The wrong tone — such as “valley girl” or “mountain man” — can also be detrimental. At an awards presentation, Alcorn said the announcer was speaking as a mountain man and by the time he got to the end of his sentence to announce the winner, no one could hear him. Mountain man was trailing off.

In the book, Alcorn also addresses bad bookends. A colleague would say “right?” after every sentence. One day, Alcorn started counting how many times he said it.

“He would say things you wouldn’t agree with but he would keep going,” Alcorn said. “It was conversational bullying.”

A common focus-on-me attitude, Alcorn explains, is saying, “No problem” or “No worries” instead of, “You’re welcome.”

Alcorn said he knows it may be uncomfortable to call someone out on what they’re saying.

“You’ve got to pick your spots. It’s not worth it in the heat of a conversation or doing it in public,” Alcorn said. “The best guide that I saw that I’ve heard and I try to copy is, ‘Can I give you some advice?’ or ‘Can I coach you?’”

He said you have to be ready to receive feedback as well. In the long term, although you may hurt someone’s feelings, it’s worth it, he said.

“If you help someone become a better person for it, it’s worth that micro-time of emotional negativity,” he said.

The book-writing process took Alcorn a year. He had written portions of the book through company newsletters about soft skills and then gathered some of his stories. His editor recommended the numerical idea, which Alcorn said was helpful because it told him when to stop — at seven, not 7,000.

“7 Dumb Things We All Say” is not a page turner, he said.

“You don’t have to start at Page 1 and read to 134,” Alcorn said. “You can just open it up to anything and just stand alone.”

He describes it as an awareness book and something readers should ponder.

“It’s psychology,” Alcorn said. “It’s not absolute math. It’s not, ‘Greg Alcorn wrote this, so it must be so.’”

He considers himself to be a subject matter expert when it comes to customer service, but “7 Dumb Things We All Say” can be used for everyday life as well.

“It’s not only a business book, but it works with personal relationships and family relationships,” he said. “It’s an easy read.”