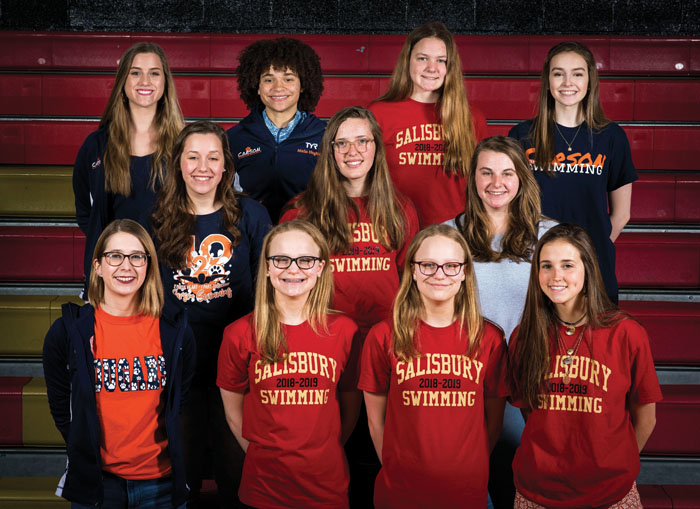 The Post’s Rowan County Swimmer of the Year won her two individual events  — the 200 and 500 freestyle races — every time she entered the water in the 2018-19 season, right up to the 1A/2A State Championships.

“Unfortunately, with Emily, there’s just not a lot of height there,” said Salisbury’s Sallie Pittman, the Post’s Coach of the Year. “She just got out-touched by taller girls. She was seeded first in the 200, so I know it was disappointing for her. But she handled it great. She showed how you rebound. She showed how you put disappointment aside. She came back with a great race in the 500.”

Knorr also was seeded first for the 500, and she made sure height wasn’t the deciding factor. She opened up a commanding lead and blew away the best in 1A and 2A, winning by more than four seconds in 4:52.73.

“I expected to win the 200, so I was kind of upset,” Knorr said. “I swam the 500 with some anger, but I was able to use the anger in a good way. That was an exciting day. Our team had a great showing and our relays had very good times.”

Knorr is very small and very polite, so it’s hard to imagine her getting angry about anything, but she’s a competitor.

She is rated as the No. 8 recruit in North Carolina in the Class of 2021, and she’s definitely still improving. As a freshman in the 2018 state meet, Knorr placed fifth in the 200 and second in the 500. This time, she swam seven seconds faster in the 500 and four seconds quicker in the 200.

Knorr’s toughest competition as the county’s top swimmer is someone she’s known since birth. The 1A/2A Championships finally separated Emily from her identical twin sister, Katie, who was equally unstoppable right up until the state meet. In Cary, Katie placed third in the 200 IM and fourth in the 100 backstroke.

“People ask me all the time if we are twins,” Emily said with a laugh. “The answer to that should be obvious.”

While the Knorrs look a lot alike, they aren’t duplicates. They have different swimming strengths. Katie, who is ranked 23rd in the state in her class, likes to work on all the strokes, which is why she’s so proficient in the 200 IM. Emily’s thing is endurance.

Last month in the Speedo Champions Series in Greensboro, Emily was a top-five finisher at 500, 1000 and 1650 yards.

“The longer, the stronger,” Pittman said. “We’re really blessed to have both of those girls. They narrow the gap between us and some of the charter schools. We lost a phenomenal swimmer (East Carolina signee Kathryn Morrison), but we were still were one of the better small schools in the state again this year.”

Pittman was on some of the earliest swim teams at North Rowan and swam four years for the Cavaliers.

She guided the Hornets to a tremendous season.

In the Central Carolina Conference Championships, the Hornets finished second behind North Davidson. The Knorrs had a perfect day, winning their two individual events, and teaming with Calista Erhart, Anna Grace Woolly and Phoebe Hollingsworth  to take the 200 medley and 400 free relays.

In the Rowan County Championships, Salisbury won its fourth straight title. The Knorrs and Erhart, a German exchange student, won every event they were in.

In the Central Regional, as the level of competition escalated, both Knorrs won their individual events once again, and they helped Salisbury finished second in two relays.

At the state meet, the Hornets, with five swimmers, put up 136 points, good for seventh place. Besides the individual points the Knorrs and Erhart accumulated, the Hornets had fifth-place and seventh-place relay efforts.

Salisbury will be strong again next season because the Knorrs will be even stronger.

“Senior year, do it again,” she said.