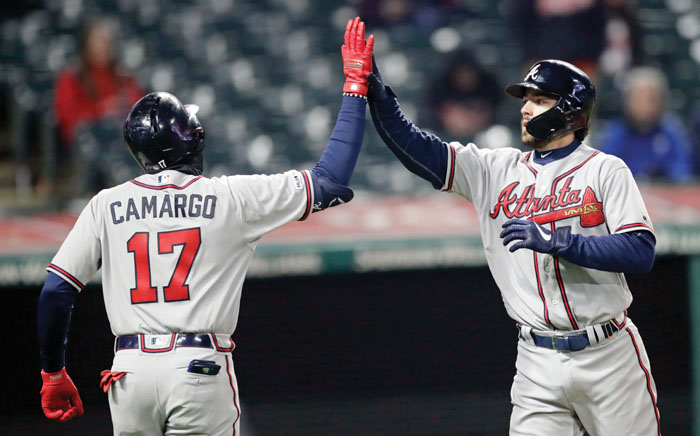 By TOM WITHERS AP Sports Writer
CLEVELAND (AP) — Francisco Lindor’s comeback got upstaged by one from Atlanta.
Ronald Acuña Jr.’s two-run double highlighted a five-run rally in the ninth inning as the Braves stormed back to beat the Cleveland Indians 8-7 in the second game of a doubleheader Saturday night, gaining a split and spoiling Lindor’s season debut.
The Braves trailed 7-0 after two innings but chipped away late and stopped a four-game losing streak.
“That was the definition of Braves baseball,” closer A.J. Minter said. “Chop on! You’ve got to play all nine innings. These hitters, they don’t stop. When we went ahead, I just felt like the game was over with. I really did.”
Cleveland won the opener 8-4 behind Corey Kluber’s strong outing.
Acuña ripped his double to left on the second pitch from Cody Anderson, Cleveland’s third reliever in the ninth and a pitcher seeking his first big league save.
The Braves also got a two-run single by Ozzie Albies and a bases-loaded walk to Freddie Freeman in the inning before Acuña, the budding star, came through after going hitless in his previous six at-bats.
“Of course, we’ve never given up, we’ve never surrendered,” Acuna said. “We’re going to keep at it until that 27th out. That never changes.”
Dansby Swanson’s two-run homer in the seventh got things for the Braves, who then sent 11 batters to the plate in the ninth.
Luke Jackson (2-0) pitched the eighth, and Minter struck out the side in the ninth for his second save.
“I never feel like they’re out of a game because I’ve seen this happen several other times,” Braves manager Brian Snitker said. “That’s the thing I admire the most about this group — and that’s a good trait to have.”
Before Atlanta’s comeback, the Indians and their fans welcomed Lindor, who returned after missing 19 games with an ankle injury. He went 1 for 5 with a run scored, but more importantly, the talented shortstop was back atop Cleveland’s lineup and his presence had an immediate effect.
“I had a blast,” Lindor said. “Unfortunately, we lost. It’s not the outcome we wanted. But it’s good. It felt good to be out there with the team. Felt good to listen to the crowd. It was a tough game, but I was happy to be a part of it.”
With Lindor back in his familiar leadoff spot, the Indians scored seven runs in their first two at-bats against Touki Toussaint, whose first start this season couldn’t have gone much worse. The right-hander gave up six hits, hit three batters and dropped the Braves into a deep, early hole.
Trevor Bauer kept them there for nearly seven innings.
He allowed only three hits in 6 1/3 innings and threw a season-high 120 pitches while making Atlanta’s hitters guess what was coming next. Bauer has allowed four earned runs or fewer in his last 58 starts, the majors’ longest streak since Hall of Famer Greg Maddux did it for 106 straight outings from 1991-94.
Afterward, Bauer expressed frustration at Atlanta’s approach against him.
“It didn’t seem like they wanted to hit tonight,” Bauer said. “It seemed like they were looking to take pitches and foul pitches off. I guess it worked out for them. So, I mean you’ve got to give them credit. They made me throw a lot of pitches and they got me out of the game in the seventh instead of having me go eight or nine, so I guess good job.”
After receiving a boisterous ovation as he stretched while walking slowly to the plate, Lindor struck out in his first at-bat of 2019. An inning later, he singled sharply to right-center and scored on Ramirez’s base hit. Lindor is wearing a brace on his ankle, which has slightly altered his gait but his boyish enthusiasm remains unchanged.
José Ramirez hit a two-run single and Jake Bauers added a two-run double during Cleveland’s five-run outburst in the second, which was aided by Toussaint hitting Leonys Martin — for the second straight time — and nailing Carlos González.
In the opener, Kluber bounced back from one of his worst outings in recent years by working seven innings. The right-hander didn’t get out of the third in his previous start, when he walked a career-high five and gave up two homers in a no-decision.
FLOWER POWER
C Tyler Flowers raised his career average against Bauer to .545 (6 for 11) with a single and a run-scoring triple in two plate appearances.
TRAINER’S ROOM
Braves: Acuña stayed in the opener after being hit on the left elbow by Kluber in the third. Acuña also slid awkwardly while catching Allen’s sinking liner in the same inning.
Indians: Injured starter Mike Clevinger has elected not to undergo surgery on an upper back strain, a procedure that could sideline him for three months. Francona said the right-hander will undergo another MRI and the results will determine when he can resume throwing.
UP NEXT
Atlanta’s LHP Max Fried (2-0, 0.92 ERA) will start the nationally televised three-game series finale against RHP Shane Bieber (2-0, 1.71 ERA), who has limited opponents to a .147 average in five appearances.
___
More AP MLB: https://apnews.com/MLB and https://twitter.com/AP_Sports i

Two in a row for the Red Sox; Braves…