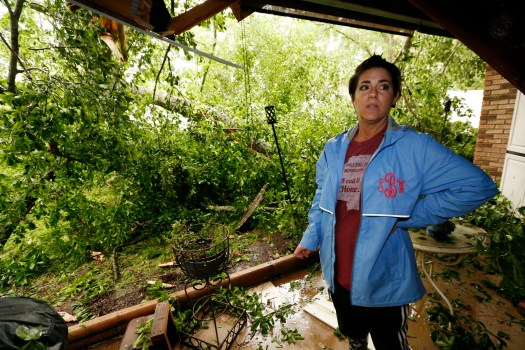 Sonya Banes had a large oak tree crash through the patio of her mother's house in Learned, Miss., Thursday. Several homes were damaged by fallen trees. Rogelio V. Solis/Associated Press 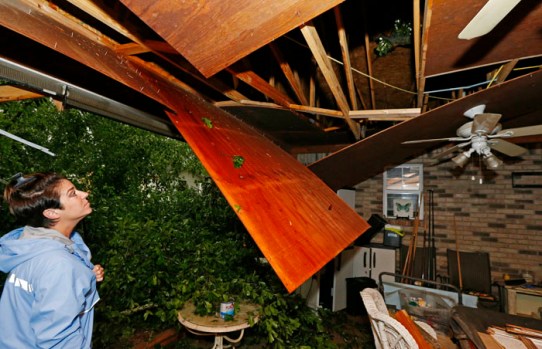 Sonya Banes looks at damage caused by a large oak tree that crashed through the ceiling of her mother's house in Learned, Miss. Rogelio V. Solis/Associated Press 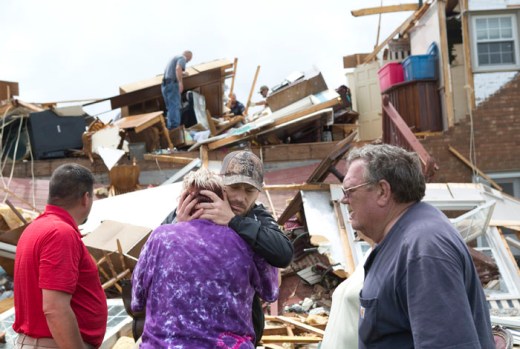 Delores Anderson, 63, center left, looks toward the wreckage of her house while comforted by friends and neighbors who came to support and help pull belongings from her home after it was destroyed by a tornado Friday in Franklin County, Va. Heather Rousseau/The Roanoke Times via AP 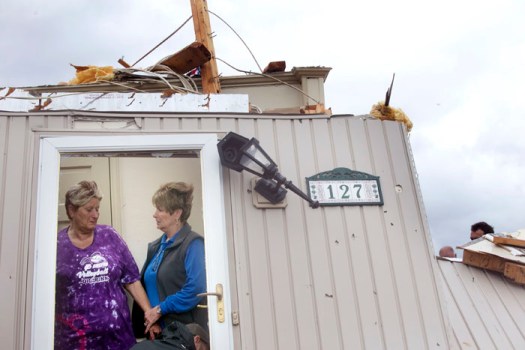 Delores Anderson, left, is comforted by good friend Bea Meeks of Rocky Mount, after her home was destroyed by a tornado Friday on Windy Ridge Road in Franklin County, Va. Anderson was the only one home when the tornado hit. She ran for cover under the stairs in her basement. Heather Rousseau/The Roanoke Times via AP 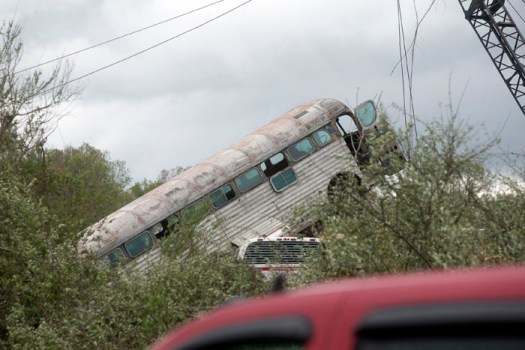 A bus that was taken by a tornado that touched down in Franklin County, Va., is viewed from Fishburn Mountain Road on Friday. Heather Rousseau/The Roanoke Times via AP 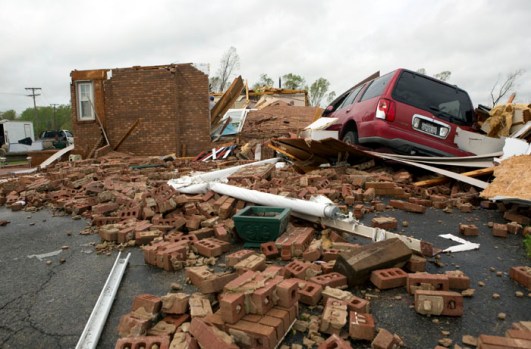 Delores Anderson's house was leveled by a tornado that touched down in Franklin County, Va. Heather Rousseau/The Roanoke Times via AP 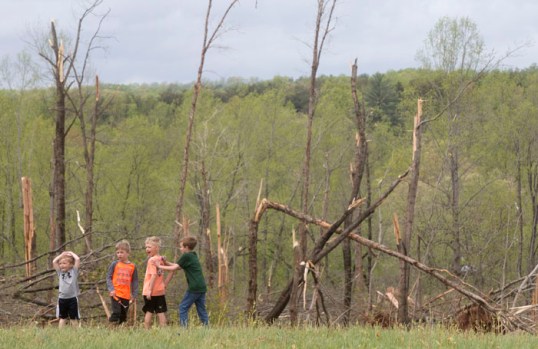 ATLANTA — A strong storm system barreling through the South on Friday killed an 8-year-old girl in Florida and threatened to bring tornadoes to large parts of the Carolinas and southern Virginia.

A tree fell onto a house in Woodville, Florida, south of Tallahassee, killing the girl and injuring a 12-year-old boy, according to the Leon County Sheriff’s Office. The office said in a statement that the girl died at a hospital while the boy suffered non-life-threatening injuries. Their names weren’t immediately released.

The same storm system was blamed for the deaths a day earlier of three people in Mississippi and a woman in Alabama.

The national Storm Prediction Center said 9.7 million people in the Carolinas and Virginia were at a moderate risk of severe weather. The region includes the Charlotte metro area.

Torrential downpours, large hail and a few tornadoes were among the hazards, the National Weather Service in Raleigh warned.

Radar readings appeared to show a tornado formed in western Virginia’s Franklin County, south of Roanoke, though damage on the ground still must be assessed, said National Weather Service meteorologist Phil Hysell. In South Carolina, authorities urged motorists to avoid part of Interstate 26 — the main artery from Upstate through Columbia and all the way to Charleston — because downed trees had left the roadway scattered with debris.

In Georgia, the storm system knocked down trees, caused flooding and cut off power to tens of thousands of people.

A tree came down on an apartment complex in an Atlanta suburb, but only one person reported a minor injury and was treated at the scene, Gwinnett County fire spokesman Capt. Tommy Rutledge told the Atlanta Journal-Constitution.

Meanwhile, hundreds of people cleaned up part of a central Mississippi town hit hard by a tornado on Thursday.

Volunteers and family members were swarming the north side of Morton, where the National Weather Service says a twister with winds as high as 132 mph hit a neighborhood. More than 20 homes were heavily damaged or destroyed. The town of 3,500 is about 30 miles east of Jackson.

“When it stopped, there was nothing left,” Morton resident Sharon Currie told WAPT-TV. “I was going, ‘Oh my God. My house is gone.'”

Damage from the storm system was reported in at least 24 of Mississippi’s 82 counties. Mississippi Gov. Phil Bryant declared a state of emergency — the second one he has declared in less than a week due to tornadoes.

Authorities on Friday reported a third storm-related death in the state. Freddie Mobley, 63, died while helping cut a tree that had fallen on a house, Lincoln County Coroner Clay McMorris told the Daily Leader of Brookhaven. Mobley had made a few cuts on the tree and backed away when the trunk shifted before he could move, Deputy Coroner Ricky Alford said.

Two other people who were driving are being counted as storm-related deaths in Mississippi. A woman also died in Alabama when a tree fell on her mobile home Thursday.