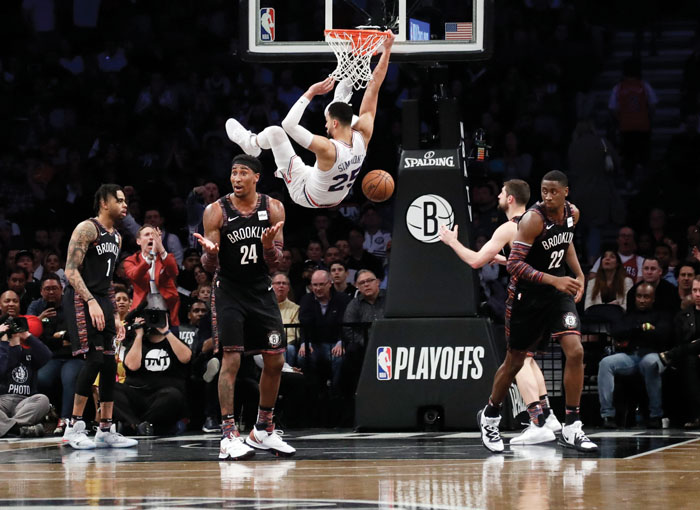 SAN ANTONIO (AP) — Derrick White had a career-high 36 points and the San Antonio Spurs beat the Denver Nuggets 118-108 on Thursday night, withstanding a first-half lapse to take a 2-1 lead in the first-round series.

Game 4 is Saturday in San Antonio, where the Spurs are 3-0 against the Nuggets this season.

White attacked Nuggets point guard Jamal Murray from the opening tip after being on the receiving end of Murray’s career outing Tuesday night. Murray had only six points, a game after scoring 21 of his 24 points in the fourth quarter to help Denver overcome a 19-point deficit to even the series.

White set his career high after being fouled by Paul Millsap on a driving layup that bounced off the side of the rim, hit the backboard and fell in to give the Spurs a 99-89 lead with 8:52 remaining. White added five rebounds, five assists and three steals while shooting 12 for 17. The point guard matched his overall career high with 26 points in the first half.

DeMar DeRozan took over after that, scoring 21 of his 25 points in the second half. LaMarcus Aldridge added 18 points and 11 rebounds, and Rudy Gay had 11 points and 10 rebounds. Malik Beasley added 20 points for Denver.

Without their All-Star man in the middle, the 76ers relied on Simmons slashing to the basket, and Harris and JJ Redick shooting from the perimeter.

Simmons was 11 for 13 from the field, repeatedly getting to the rim even with the Nets sagging well off him in hopes he would shoot a jumper. He added nine assists and eventually quieted a crowd that loudly booed him every time he touched the ball early. Harris had his playoff highs in both points and rebounds, and was 6 for 6 from 3-point range. Redick was 5 of 9 behind the arc and finished with 26 points.

Embiid warmed up before the game but the 76ers announced shortly before the start that the All-Star center wouldn’t be available because of a sore left knee. Greg Monroe started in his place and had nine points and 13 rebounds.

D’Angelo Russell and Caris LeVert each scored 26 points for the Nets. They have dropped the last two games after surprising the No. 3 seed in the opener in Philadelphia.

The Grizzlies said Thursday that the 6-foot-9 forward should be ready to return to full basketball activities in advance of training camp.

The 25-year-old Anderson played just 43 games this season in his first year with the Grizzlies, who signed him last summer as a restricted free agent.

The Grizzlies signed Anderson to a four-year, $37.2 million offer sheet that the San Antonio Spurs declined to match.

He spent his first four NBA seasons with the Spurs, who drafted him out of UCLA with the 30th overall pick in 2014.