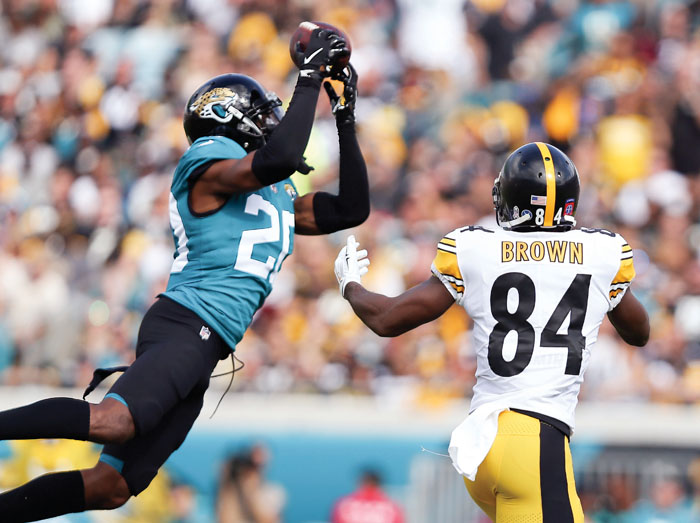 FILE - In this Nov. 18, 2018, file photo, Jacksonville Jaguars cornerback Jalen Ramsey, left, intercepts a pass in front of Pittsburgh Steelers wide receiver Antonio Brown (84) during the first half of an NFL football game in Jacksonville, Fla. Ramsey responded to Tom Coughlin’s public criticism Friday, April 19, saying the team knows why he’s skipping voluntary workouts. Ramsey did not elaborate on the reason for his absence in his Twitter post, but said he will be “ready when it’s time.” (AP Photo/Gary McCullough, File)

By MARK LONG AP Sports Writer
JACKSONVILLE, Fla. (AP) — Jacksonville Jaguars cornerback Jalen Ramsey responded to Tom Coughlin’s public criticism Friday, saying the team knows why he’s skipping voluntary workouts.
Ramsey did not elaborate on the reason for his absence in his Twitter post , but said he will be “ready when it’s time.”
His agent, David Mulugheta, also released a statement Friday.
“To be clear, Jalen Ramsey is exactly where Jalen should be during his offseason,” Mulugheta tweeted. “He’s spending time with his young daughter &amp; family while training in his hometown of Nashville. In addition the Jags are fully aware of why he is not taking part in the voluntary offseason program.”
Coughlin took a not-so-subtle shot at Ramsey and linebacker Telvin Smith during the team’s state of the franchise presentation Thursday.
Coughlin, the team’s executive vice president of football operations, said “championship teams are dominated by selfless individuals who recognize that the welfare of the team must always be paramount to any other consideration.”
Ramsey and Smith are the team’s only players who didn’t show up for the start of the team’s offseason program. Coach Doug Marrone said he reached out to both players and didn’t hear back from either one.
Ramsey also skipped voluntary workouts last year, choosing instead to spend the offseason working out at his father’s training facility in Nashville, Tennessee. He’s entering the fourth year of his rookie contract, a four-year deal worth $23.35 million. He made the Pro Bowl each of the past two seasons, is widely considered one of the best cornerbacks in the NFL and is due to count $7.43 million against the salary cap in 2019.
Smith’s absence was more surprising, especially since he’s been in attendance each of his first five years in the league and got a contract extension in 2017.
“Success in the NFL demands struggle,” Coughlin said. “Those who have everything given to them become lazy, selfish and insensitive to the real values of team. The hard work that many try to avoid is the major building block for the development of an outstanding football team.
“It’s not about rights and privileges. It’s about obligations and responsibility. And the question is, can we count on you? Doing the things the right way all the time; we are what we repeatedly do. Excellence therefore is not an act, but a habit.”
NFLPA President Eric Winston reacted a short time later, saying the Collective Bargaining Agreement’s definition of voluntary “is the same as the actual definition of voluntary and prohibits anyone from threatening players to participate in voluntary workouts.”
“This is precisely the reason players negotiated strict work rules and bright lines when it comes to offseason activities,” Winston added. “We know, from experience, that not all coaches and executives will adhere to them and we always pursue any violations to protect our rules.”
___
More AP NFL: https://apnews.com/NFL and https://twitter.com/AP_NFL