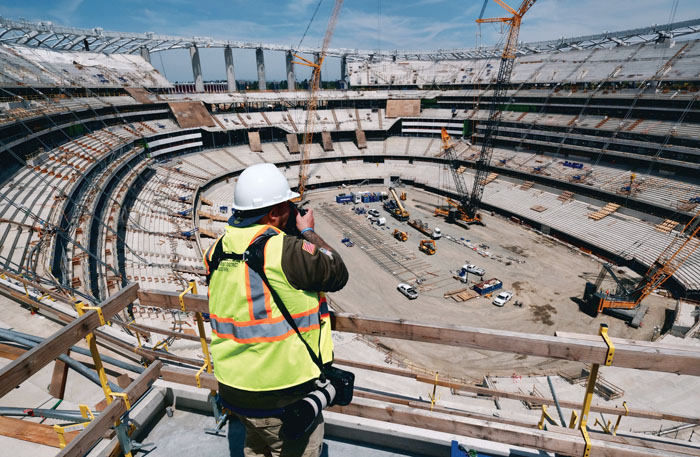 A photographer takes a photo of the new NFL Los Angeles Stadium while under construction during a topping-out ceremony in Inglewood, Calif. on Monday April 15, 2019. Stadium officials hosted a tour for the media after the final piece of the canopy structure to hold the roof was completed. (AP Photo/Richard Vogel)

INGLEWOOD, Calif. (AP) — The stadium that will house Los Angeles’ NFL teams has reached another milestone with its opening less than 16 months away.

Officials with LA Stadium at Hollywood Park and representatives from the Rams and Chargers held a ceremony Monday to celebrate the completion last week of the outer shell for the canopy that sits above the stadium’s seating bowl, Champions Plaza and performance venue.

The steel roof shell is one of three parts of the canopy. The other two parts are the cables to keep the roof and suspended Oculus scoreboard in place and a single layer of ETFE (Ethylene Tetrafluorethylene), which is a lightweight and transparent plastic. It was also used to construct the roof of US Bank Stadium in Minneapolis, which hosted the 2018 Super Bowl and this year’s Final Four.

“Each time we come here it gets more and more real,” Rams chief operating officer Kevin Demoff said. “When the NFL envisioned coming back to Los Angeles, this is what they had in mind — a two-team iconic stadium that anchors a sports and entertainment district.”

LA Sports and Entertainment District managing director Jason Gannon said the stadium is two-thirds complete. When it opens, the stadium will measure more than 3 million square feet and will be the largest in the NFL.

“I’ve seen a lot of NFL stadiums, but this is the largest. It’s grand but it’s befitting of Los Angeles,” said A.G. Spanos, the Chargers’ president of business operations. “You need a stadium to match the city.”

The seating capacity will be 70,240 but can be expanded to 100,000 for major events. It is already slated to host the Super Bowl in 2022, the College Football Playoff title game in 2023 and the opening and closing ceremonies for the 2028 Summer Olympics.

The Chargers have one more year at Dignity Health Sports Park and the Rams are going into their final season at the Los Angeles Memorial Coliseum. Both teams have started to bring their staff to the construction site on a regular basis to begin planning game presentation and other details.