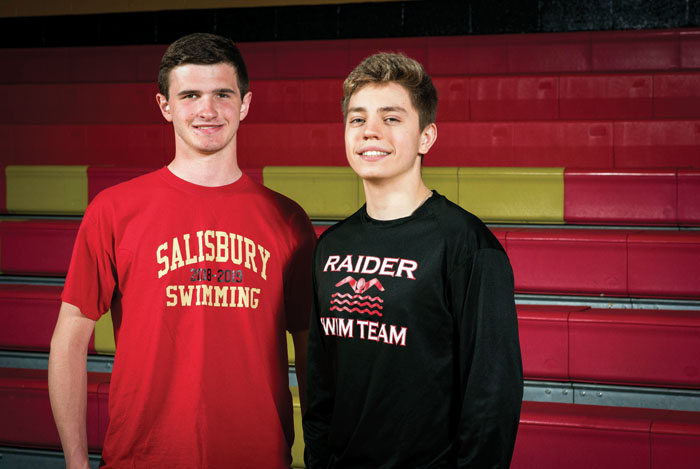 Those teams provided the fireworks. They couldn’t have been much closer in talent or tenacity.

“We had a great season and Salisbury had a great season,” said South coach Jarrod Smith, the Post’s choice as Rowan County Coach of the Year. “There was great competition. It brought out the best in both teams.”

In the county battle, South nipped the defending champion Hornets, 313-298, on Jan. 23 at J.F. Hurley YMCA. In the Central Carolina Conference struggle, South edged the Hornets, 270-264, for second place, behind a convoy of North Davidson swimmers.

The Post’s co-swimmers of the year reflect the tightness of the teams.

Blaise Bumgarner, a senior who turned in a 4-for-4 day for South at the county meet and was recognized as the meet’s outstanding performer, shares the award with Salisbury senior Roarke Burton. Burton was the more impactful swimmer at the regional and state levels. He had a third and a fifth in the 1A/2A State Championships.

Bumgarner and Burton were excellent team leaders for public school programs that are fighting an uphill battle in the swimming world against charters, preps and academies stocked with club swimmers.

Bumgarner and Burton were lauded by their coaches for their willingness to maximize their talent with great work ethic. Both inspired their teammates to be the best they could be.

“Roarke Burton was one of the hardest-working individuals I’ve ever had the pleasure of coaching,” Salisbury coach Ryan Starrett said. “He set tough goals and accepted responsibility for  being pushed hard to reach those goals. We’ll miss his ability next season, but we’ll also miss his character.”

Burton always arrives at the pool after spending the fall running cross country for the Hornets. Then, after he leaves swimming, he’s one of the county’s best at tennis. For him to compete at a state level while swimming only a few months a year speaks volumes about his athletic ability.

“When I go to swimming from cross country, it really is hard to get acclimated,” Burton said. “It’s a very different kind of conditioning that’s needed for swimming.”

Burton’s individual events are the 50 and 100 free. Starrett also would employ his star in two relays.

In the CCC Championships, Burton won the 50 and 100 and helped Salisbury finish third in the 200 medley relay.

In the Rowan County Championships, he again won the 50 and 100. He swam on the winning 400 free relay team.

At the regional level, Burton was the champion in the 100 and second in the 50.

“The state meet was an awe-inspiring day, a once-in-a-lifetime day,” Burton said. “I dropped more than a second off my regional time in the 100, and that was pretty amazing. I competed at a high level against great, year-round swimmers.”

While Burton peaked in the state meet, there’s no doubt that the meet Bumgarner will remember 50 years from now was South’s triumph in the county meet.

That meet began with the 200 medley relay. The Hornets had their best in that event, including Burton. South had their familiar four seniors — Bumgarner, Cameron Hurd, Christian Reynolds and Noah Severt — ready to go.

Everyone agreed that whoever won that event was going to win the day, and it was South’s event and South’s day.

“All day our team built momentum off that win in the first event,” Bumgarner said.

Coach Smith also took a calculated gamble with Bumgarner in the county meet, putting him in the 200 individual medley instead of the 50 free. South needed to win all four events Bumgarner was entered in. He usually swims the 50 and swims it fast, but  he still wasn’t going to beat Burton in the 50.

Bumgarner made the adjustment pay off, winning a tough race in the 200 IM against Roshen Amin, Salisbury’s second-best swimmer.

“We knew what we needed to do, and Blaise and a lot of outstanding seniors made it happen,” Smith said. “It was nice that our seniors could go out on top with a county championship.”

In the CCC Championships, Bumgarner was second in the 100 backstroke, his best individual event, and he took third in the 100 free. He swam two relays and helped South finish second and third.

At the regional level, Bumgarner was third in the 100 backstroke and sixth in the 50 free.

South held two practices a day. Bumgarner would go to both.

Swimming is what Bumgarner does. He works at it during the summer as well as the winter. That’s why he was able to set school records in the 50 free, 100 free and 100 backstroke.

“I didn’t start swimming until my freshman year, but I loved it,” Bumgarner said. “I’ve tried to be consistent and get a little better every year. We had some great team accomplishments this season, and I was proud to be part of that. I had great teammates.”

Work in the weight room gave Bumgarner a little more explosion as a senior, and he’s always been a tough competitor.

“We weren’t surprised at all by the season Blaise had because he’s focused and he’s driven and he works extremely hard,” Smith said. “He set a lot of high goals — and he achieved them.”

Smith is a big, husky guy who had success coaching South Rowan’s girls basketball team during the Avery Locklear years. He’s been a key assistant football coach at South for a long time, including serving as offensive coordinator.

The Appalachian State graduate was a basketball and football standout during his days at Wilkes Central High, but he also has a strong swimming background.

He helped get that sport started at Wilkes Central.

“Actually, swimming was my first sport,” Smith said. “When I was 16, I had to chose between swimming and football and went with football.”

His swimming knowledge is paying off for a South program that continues to add to the legacy of the county dynasty built by coach Greg Yanz.

It was an exciting year for boys swimming, with the county’s 2A schools, South and Salisbury, at the forefront. But keep an eye on Carson and coach Caleb Helms for next season. Helms was voted North Piedmont Conference Coach of the Year.