Corbin takes 1-hitter into 8th as the Nationals top SF 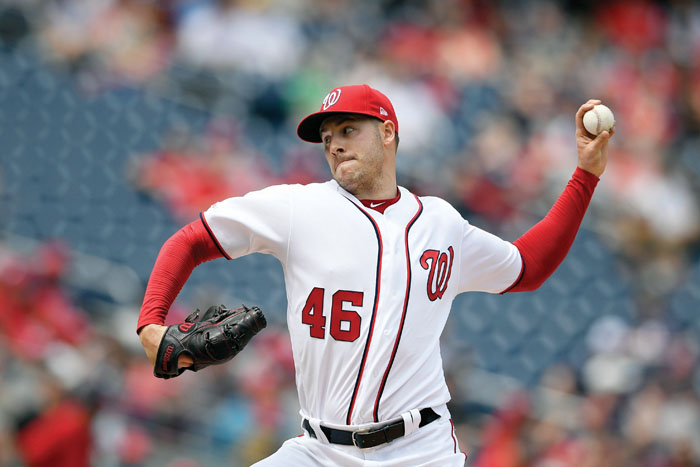 WASHINGTON (AP) — Patrick Corbin took a one-hitter into the eighth inning in his first victory with Washington, Wilmer Difo homered and the Nationals beat the punchless San Francisco Giants 4-2 on Thursday.

Signed to a $140 million, six-year contract in December after pitching for six seasons in Arizona, Corbin started three games without a decision with his new team before throwing a gem in the deciding matchup of a three-game series.

Corbin (1-0) struck out nine, walked one and a hit a batter over 7 2/3 innings against a struggling San Francisco offense that came in with a .208 average. The lone hits against the lefty were Evan Longoria’s fifth-inning double and Erik Kratz’s two-out RBI double in the eighth.

After Kratz broke up the shutout, Kyle Barraclough entered and retired pinch-hitter Buster Posey. Sean Doolittle worked the ninth, giving up three hits and a run while earning his second save.

ATLANTA (AP) — Christian Walker continued his remarkable late-innings production with a two-run homer in the seventh, Luke Weaver got Arizona off to a good start and the Diamondbacks beat Atlanta to complete a three-game sweep.

Walker lined the opposite-field homer to right-center off Chad Sobotka (0-1) following a single by Adam Jones. It was Walker’s sixth homer — all in the seventh inning or later. He added a double in the ninth.

The Diamondbacks have won four straight, including their first sweep of the Braves since 2016.

Arizona led 4-0 before Freddie Freeman led off the eighth with a homer against Matt Andriese.

Yoshihisa Hirano, who earned the win in the opening game of the series, gave up a one-out single to Ender Inciarte in the ninth. Hirano struck out pinch-hitter Josh Donaldson and ended the game on Ozzie Albies’ flyball for his first save.

Eric Sogard added a three-run double for the Blue Jays. They took three of four at Target Field.

DETROIT (AP) — Nicholas Castellanos had three hits and drove in a pair of runs and Detroit beat Chicago to end a five-game losing streak.

Grayson Greiner had a career-high three hits and two RBIs for the Tigers. Miguel Cabrera, playing on his 36th birthday, also drove in a pair of runs to help Detroit set season highs for runs and hits (14).

Jorge Soler and Ryan O’Hearn hit solo home runs off Domingo Germán (3-1), and the Royals won their second straight after starting the season 5-12, including 0-5 on the road.

Bailey (2-1) allowed a tying run to the Yankees on Gleyber Torres’ first-inning sacrifice fly, then gave up just one more hit. Bailey, who struck out six and walked one, had not won back-to-back starts since July 4, 2017, at Colorado and five days later at Arizona.

MILWAUKEE (AP) — Cody Bellinger hit his 10th home run, Max Muncy hit a two-run shot, and Julio Urias struck out a career-high nine and allowed one hit in six strong innings as Los Angeles extended its winning streak to five games with a win over Milwaukee.

Bellinger drove a 3-2 pitch from reliever Matt Albers (1-1) into the Dodgers’ bullpen in right center in the sixth inning. Muncy followed with a homer that landed in the netting above the Brewers’ bullpen in left.

ST. PETERSBURG, Fla. (AP) — Joey Rickard drove in the winning run in the 11th inning with an RBI double, his fourth hit of the game, to lift Baltimore over Tampa Bay.

Rickard doubled off Diego Castillo (0-1) after two-out singles by Chris Davis and Rio Ruiz kept the inning alive for Baltimore.

John Means (2-2) got the win with two innings of relief for the Orioles, who snapped a six-game losing streak against Tampa Bay. Trey Mancini had three hits and Pedro Severino homered for the Orioles.

DENVER (AP) — Ryan McMahon homered twice and had five RBIs in his return to the lineup and Kyle Freeland pitched six scoreless innings in Colorado’s win over Philadelphia.

McMahon had the first multi-homer game of his career and helped the Rockies snap a five-game home losing streak. Colorado has won four in a row overall after dropping eight straight.

McMahon had been out of the lineup since suffering a strained left elbow against the Los Angeles Dodgers on April 5.

He missed 10 games, but came back strong to help Freeland get his eighth win in his last nine decisions at Coors Field.

Tony Wolters had three hits and Nolan Arenado two for the Rockies.