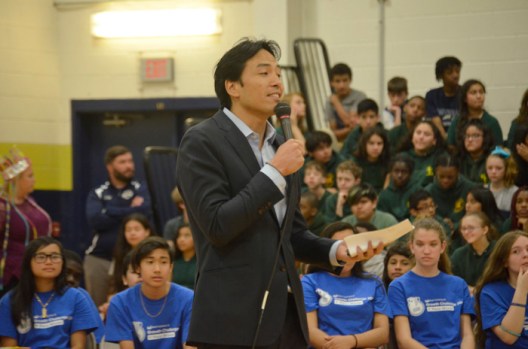 Daniel Tu-Hoa, senior vice president for North America for Mathspace, presents a trophy to Bradley Gilbert, not shown, and a $3,000 check to Southeast Middle School for its top rankings for a math challenge. The school dominated the leaderboard among schools represented in 36 states. Shavonne Walker/Salisbury Post 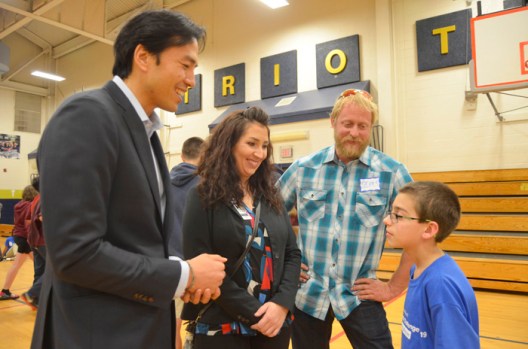 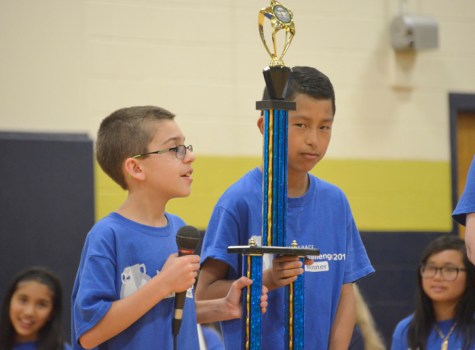 Bradley Gilbert and Alexis Gonzalez, Southeast Middle School students, accept a trophy for the school's win in the Mathspace Growth Challenge. The school ranked in the top nationally for answering the most math-related questions. Shavonne Walker/Salisbury Post

SALISBURY — Southeast Middle School students cheered and clapped Friday as they were recognized as top scorers in a national math problem-solving challenge.

More than 250 schools across 36 states participated and more than 2.5 million problems were solved in the Mathspace Growth Challenge. Mathspace, a web-based math program, was developed in Australia.

This is the first time the challenge was offered in the United States. It ran from Feb. 11 to March 24.

Southeast sixth-grader Bradley Gilbert, 12, solved more problems than any other student in the nation during the challenge time frame.

Daniel Tu-Hoa, Mathspace’s senior vice president for North America, was on hand to present Bradley with a trophy and congratulate his classmates for making Southeast Middle the top school in the country.

School officials said of the students who were at the top of the leaderboard, Spanish is the first language for five to eight of them.

In addition, four other Rowan-Salisbury schools — Erwin, China Grove, West Rowan Middle and Corriher Lipe — were in the top five while North Rowan Middle was 20th on the list.

As the first-place school, Southeast received a $3,000 check, which Principal Jennifer Lentz said would be used for math-related materials.

She said the Mathspace program has “afforded us the opportunity to grow the skill set of our students and enjoy the chance to compete on a national level.”

As students solve problems, the program tailors the questions to their strengths and weaknesses. Students in the U.S., Australia, United Kingdom, Singapore and Hong Kong are using the online math tool, which recognizes students for growth and improvement, not just top scores.

Bradley told his fellow students during the awards ceremony that he enjoyed the opportunity to participate.

His parents, Rebecca and Casey Cross, were on hand to help him celebrate.

Bradley said he was really surprised to know he answered the most questions. When asked if math is his strong suit, Bradley said he enjoys all subjects.

He said he hopes to become a marine biologist.

Tu-Hoa said the company was blown away by the Southeast students.

“It’s awesome to see kids celebrated for math. We recognize kids all of the time for sports. It’s great to recognize academic achievement,” Tu-Hoa said.

The two students with the most Mathspace points from each class — a total of 58 — were given a Five Below gift card from the PTA in recognition of their hard work.

Students also had a pizza party after the assembly.