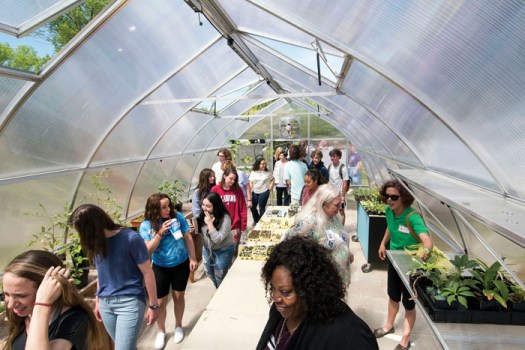 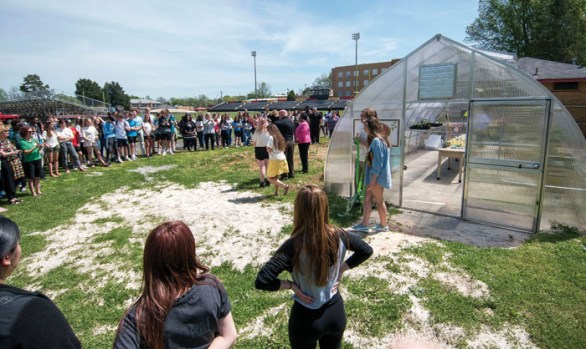 A crowd gathers for the opening of the Salisbury High School greenhouse. Jon C. Lakey/Salisbury Post 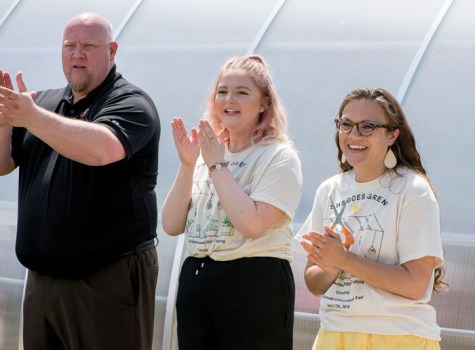 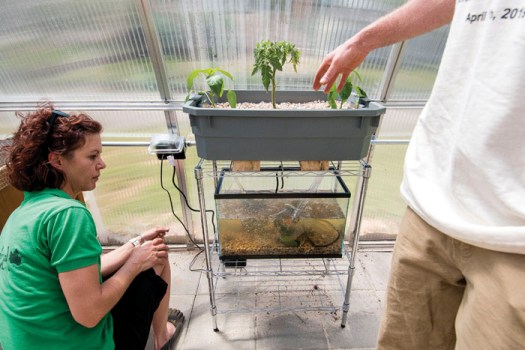 Helayna Bostian of ReWorked looks at the aquaponics setup in the greenhouse. Jon C. Lakey/Salisbury Post 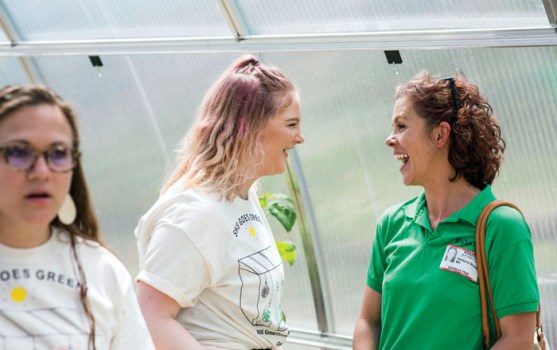 But an unexpected yet welcome addition has recently sprouted against this athletic backdrop. At the stadium’s border with Lincolnton Road, a garden, a compost pile and a newly completed greenhouse are now ready to welcome the warm and busy days of spring.

Faculty, staff, students and community stakeholders gathered Wednesday to celebrate the ribbon-cutting for the eco-friendly structure.

Principal Luke Brown said the project had been “several months to over a year in the making,” explaining that the greenhouse had been a shared vision between Salisbury High 2018 graduate Autumn Ulrich and earth and advance-placement environmental science teacher Carie Fugle.

“It’s very exciting not only for us to be able to teach plant sciences in this space,” Brown said, “but also to use it to grow foods that our at-risk students will be able to take home over the weekend.”

Ulrich, now a freshmen at the University of Tennessee, said the project was a natural fit for her.

“I’ve always been in love with the environment and environmental studies,” she said.

As a student of Fugle’s, she was introduced to the teacher’s dream of a greenhouse for Salisbury High.

“I thought, ‘I can do that,'” said Ulrich, adding that her status as a Girl Scout gave added motivation. “I knew I could use this as my Gold and Senior projects.”

So she wrote up a proposal for the space, presenting the idea to anyone and everyone who would listen for the next three months. It was then that Brown connected her with community conservationist Fred Stanback at an environmental fair held at Horizons Unlimited.

“He didn’t smile. He didn’t say one word to me that he was interested in what we wanted to do,” Ulrich said. “It wasn’t until later that Mr. Brown told me (Stanback) had decided to fully fund the project.”

While Ulrich is now a four-hour trek away from her alma mater, she said she’s tried to remain as hands-on with the completion of the greenhouse project as possible. The structure was completed just this year with the help of ReWorked, Rowan County Cooperative Extension, Happy Roots, Rockwell Farms and others.

Helayna Bostian with ReWorked said the greenhouse construction should likely reach a carbon footprint of zero by fall or early next year — offset only by bringing the structure over from Germany and using a gas-powered tamper to level the soil.

“We have a big vision for this space, and that vision involves opening it up to all Salisbury High School students,” said Fugle, mentioning once more Brown’s vision of sending home fresh fruits and vegetables with students. “Even if we only help one student, that’s made this all worth it for me.”

The greenhouse will be used in the school’s new botany class next  year, as well as by the school’s STEM Academy, Environmental Club and Leopold Society.

Ulrich said that although the greenhouse may not have “all the nifty things crazy greenhouses have in Japan,” the structure was something of which to be proud.

“The beauty of making people’s lives just a little better day by day is something for which I strive, and in my own way this greenhouse is that,” she said. “It is mine and it is ours, and that is perfect and beautiful.”