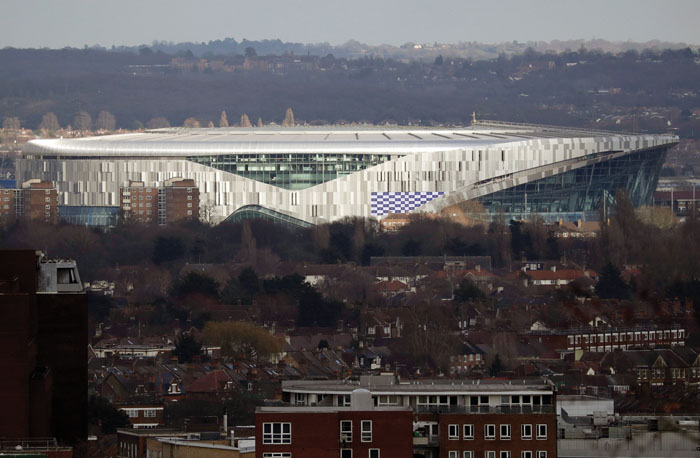 FILE - In this Feb. 20, 2019, file photo, the new Tottenham Hotspur stadium in north London is viewed. The NFC champion Los Angeles Rams will host Cincinnati in London for one of five international games on the 2019 schedule.The Rams and Bengals will face off at Wembley Stadium on Oct. 27. Earlier in October, the league will play two games at Tottenham Hotspur's new stadium in London. The Raiders will host the Bears on Oct. 6, and the Buccaneers will be the home team against the Panthers on Oct. 13. (AP Photo/Matt Dunham, File)

NEW YORK (AP) — The NFL’s 100th season will begin with its most classic rivalry and feature the Super Bowl champion Patriots hosting Pittsburgh in the first Sunday night game.

As previously announced, NFL 100 will kick off with Green Bay at Chicago for the 199th meeting of a series that began in 1921. That Sept. 5 game in the Thursday night slot usually reserved for hosting by the NFL champ forced New England to open three nights later.

The Patriots and quarterback Tom Brady have a home schedule loaded with top attractions, including Kansas City on Dec. 8 in an AFC title game rematch, and Dallas on Nov. 24.

Monday night’s doubleheader on ESPN will feature Houston at New Orleans and Denver at Oakland.

“We know every year there seems to be a last-to-first story,” said new Broncos coach Vic Fangio, the Bears’ defensive coordinator last season. “We were that in Chicago last year. I suppose a lot of teams counted us as a win last year. Every season is a new season and the order they choose for us to play them in, we’ll play them in.”

The Carolina Panthers will open at home on Sept. 8 against the defending NFC champions — the Los Angeles Rams. The game is on a Sunday afternoon, with a 1:00 start.

Carolina has a quick turnaround in Week 2, hosting Tampa Bay  on Thursday Night Football on Sept. 12 (8:20).

Week 2 includes an intriguing Monday night matchup of Cleveland at the New York Jets. The very first Monday nighter was a Browns win over Joe Namath and the defending champion Jets in 1970. This one will feature the return to the Meadowlands for now-Browns receiver Odell Beckham Jr., and two young, potential star quarterbacks in Cleveland’s Baker Mayfield and New York’s Sam Darnold.

National broadcasts rarely have included the downtrodden Browns, but they’re a popular choice this year: Cleveland will have four prime-time games, also facing the Rams, San Francisco and archrival Pittsburgh.

Every team will have at least one national TV appearance. New England, Pittsburgh, Kansas City, Green Bay, Seattle and the Rams get the maximum prime-time games, five.

The traditional Thanksgiving Day games will have Detroit at home to Chicago, then Buffalo at Dallas. The night game to close the holiday schedule will be New Orleans at Atlanta in another long-time rivalry.

The NFC champion Los Angeles Rams will host Cincinnati in London for one of five international games on the 2019 schedule. The Rams and Bengals will face off at Wembley Stadium on Oct. 27.

Earlier in October, the league will play two games at Tottenham Hotspur’s new stadium in London. The Raiders will host the Bears on Oct. 6, and the Buccaneers will be the home team against the Panthers on Oct. 13.

Wembley will be the site of the fourth London match, with Houston facing host Jacksonville on Nov. 3.

The league returns to Mexico, after last season’s Chiefs-Rams game was moved to Los Angeles because of poor field conditions at Azteca Stadium. On Monday night Nov. 18, the Chiefs will play LA’s other team, the Chargers.

In Week 16, the NFL has left 10 teams in semi-limbo. Three games are scheduled for NFL Network on Saturday, Dec. 21, and will be chosen among these five: Detroit at Denver; Oakland at the LA Chargers; Buffalo at New England; the Rams at San Francisco 49ers; and Houston at Tampa Bay. The non-Saturday games will be played Sunday.

The season ends Dec. 29, when Chicago finishes at Minnesota for the fourth successive year. All finales are divisional games for the 11th straight season.

“This is an exciting time,” said Giants coach Pat Shurmur, whose team opens at Dallas. “This week, we started the offseason program. And now we can see when we’re going to play. We knew who our opponents would be and where we are going to play, but there’s an excitement that builds once the schedule comes out.”

Among the oddities, in one stretch the Raiders will go seven weeks before playing a game in Oakland. They entertain the Chiefs on Sept. 15, then have road games at Minnesota and Indianapolis, host Chicago in London, are off Oct. 13, then go to Green Bay and Houston. They return to Oakland on Nov. 3.

Miami opens with four 2018 playoff opponents: home for Baltimore and New England, at Dallas, home for the Chargers. Then the Dolphins have a bye.

COLORADO SPRINGS, Colo. (AP) — Forrest Gregg was remembered Wednesday as a gentle giant who was as comfortable playing Barbie dolls with his daughter as he was playing football for Vince Lombardi.

Gregg died Friday at age 85 after a long fight with Parkinson’s, a disease his neurologist and family believe might have been triggered by the countless concussions he sustained while playing football in the 1950s at SMU and in the NFL from 1956-71.

“Forrest Gregg is one of the giants of the game,” Hall of Fame President David Baker said, noting Gregg was one of a handful of players to win six NFL titles in a league that’s celebrating its 100th season. The others are his Packers teammates Herb Adderley and Fuzzy Thurston and Patriots quarterback Tom Brady.

Gregg’s booming baritone that was reduced to a whisper in his later years reverberated through the First United Methodist Church in Colorado Springs as his Hall of Fame acceptance speech in 1977 was played on two screens above the altar.

After playing 14 seasons in Green Bay, Gregg won one more Super Bowl in 1971 in Dallas. He went on to win 75 games in 11 seasons as a head coach in Cleveland, Cincinnati and Green Bay and he took the Bengals to their first Super Bowl during the 1981 season when they lost 26-21 to Joe Montana and the 49ers.

Bengals owner Mike Brown was among those who attended the funeral for the man Lombardi once called “the finest football player I ever coached.”

In an interview with The Associated Press in 2013, Gregg said “the finest bunch of players I was ever around,” weren’t Lombardi’s Packers or Tom Landry’s Cowboys but “the courageous kids at SMU.” They went just 3-19 from 1989-90 after Gregg was hired at his alma mater to restore integrity to a program that was handed the “death penalty” in the mid-1980s for paying players.

Baker spoke at the funeral, as did Hall of Fame receiver James Lofton, who played for Gregg in Green Bay, and Greg Gardner, who was among two dozen ex-SMU players who stood at one point to sing “Varsity” in a moving moment at the public church service that preceded a private burial.

Lofton said he saw another side of Gregg upon his retirement when Gregg, who was then the athletic director at SMU, invited him to bring his three young children to a basketball game. Afterward, they went up to Gregg’s office, “and he bounced my kids on his knee and I’m thinking, where’d this guy come from?”

Gregg’s daughter, Karen Gregg Spehar, said her father was every bit the family man that he was the football man.

“At his core, his life was about love,” she said.

She shared some of her most poignant memories of her childhood when her father gladly attended her tea parties.

She recalled “a giant smiling man sitting across from me, our pinkie fingers raised just so.”

Gregg, who earned the nickname “Iron Man” for playing in a then-record 188 consecutive games during his career, was diagnosed with Parkinson’s in October 2011. He quickly embarked on a campaign to raise public awareness about the incurable disease, teaming with the AP to reveal his diagnosis so he could urge others to seek treatment early enough to delay the degenerative effects.

His daughter said after the funeral that the family donated his brain to Boston University’s CTE Center, which conducts research on chronic traumatic encephalopathy and other long-term consequences of repetitive brain trauma in athletes and military personnel.

“We decided as a family to donate his brain to Boston University because we are not sure what’s going on with his brain as far as either Parkinson’s or CTE because of his repetitive concussion syndrome that he experienced in football,” Gregg Spehar said. “So we are going to find in eight months to a year really what happened with his brain.

“And we will share that report with anybody who wants to know so that people can learn about what happens in the world of football and also what happens with Parkinson’s in the brain,” she said. “So, we are hoping that his ultimate gift with be a gift that helps more people.”