NHL playoffs: Bruins hold off Maple Leafs to even series at 2-2 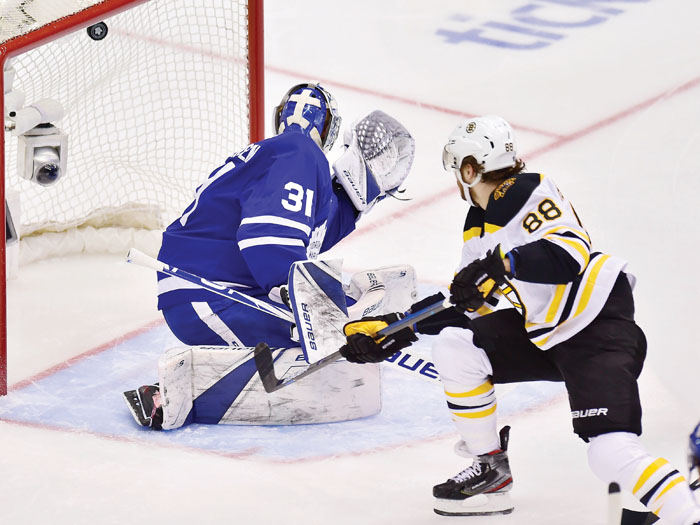 TORONTO (AP) — David Pastrnak scored twice in quick succession, Brad Marchand had a goal and two assists and the Boston Bruins held off the Toronto Maple Leafs 6-4 on Wednesday night to tie the first-round series 2-2.

Game 5 is Friday night in Boston.

After the Maple Leafs overcame a 2-0 deficit to tie it early in the second period, Pastrnak put Boston back in front at 3:16 when he redirected a pass from Marchand on a 2-on-1. The Bruins then got a power play when Matthews went off for roughing, and Marchand whipped a backhand pass to a wide-open Pastrnak, who snapped the puck short-side on Andersen for his second goal in 1:35.

Chara made it 5-2 at 5:39 of the third. At 42 years, 30 days, the Boston captain became the second-oldest defenseman in NHL history to score a playoff goal. Chris Chelios holds the record at 45 years, 86 days.

Matthews scored on the power play with 8:08 left, and Dermott made it 5-4 through traffic with 6:33 remaining. Nordstrom scored into an empty net with two seconds to go.

DALLAS (AP) — Roope Hintz and Alexander Radulov scored power-play goals on Dallas’ first two shots, and the Stars chased Nashville goalie Pekka Rinne with an early four-goal onslaught, beating the Predators and TO even series at two games each.

Roman Josi scored for the Predators.