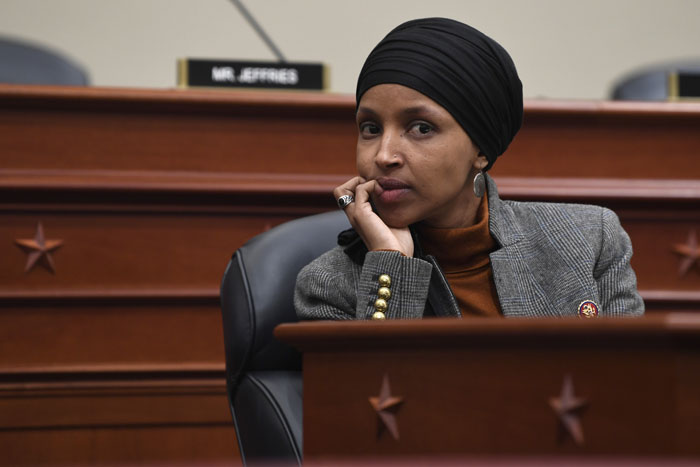 And what will you say afterward, America?

That is not to encourage or even predict that there will be an “afterward” — that is, that someone will use violence to silence Minnesota Rep. Ilhan Omar, one of the first two Muslim women in Congress. But it is to say the possibility is real.

This comes after Jeanine Pirro of Fox “News” questioned whether Omar’s faith was incompatible with being an American, after an altercation in the West Virginia capital over a poster linking Omar to the terrorist attacks of Sept. 11 and after a Trump supporter was arrested for allegedly threatening to “put a bullet in her … skull.”

Now here comes President Donald Trump, not to tamp down extremism, but to fire up the mob. His pretext: four words. They came last month in a speech Omar gave to a gathering of the Council on American-Islamic Relations. CAIR was, she said, founded “because they recognized that some people did something and that all of us were starting to lose access to our civil liberties.”

“Some people did something.” That’s how Omar described the 9/11 attacks. To be sure, it’s fair to question what she said and how she said it.

Besides being factually inaccurate — CAIR was founded in 1994 — it was an inartful way of describing an attack that left 3,000 people dead. It was also, arguably, an effective way of drawing a distinction between the great, peaceful mass of Islam and the small band of moral freaks who hijacked airplanes that crystalline Tuesday morning.

But for all that Omar’s words were, arguably, they have been one thing, indisputably: a weapon in the hands of intolerance.

It was unsurprising to see Trump go on Twitter to ramp up the mob, posting a video that juxtaposed Omar’s words with news footage of that dreadful morning. “WE WILL NEVER FORGET,” he tweeted. This was on Friday. Two days later, Omar was reporting a spike in death threats and security people were imposing new measures to protect her.

A brown-skinned Muslim from Somalia, it seems, is forever on probation, her love of country always suspect. Yet, a pale-skinned putative Christian from Queens has no need to prove his patriotism, even after he observes — on Sept. 11 itself, yet — that the fall of the Twin Towers means he now owns the tallest building in Lower Manhattan.

And isn’t it telling that a country that supposedly holds that tragedy sacred forces that day’s first responders to periodically beg a resistant Congress for money to cover the cancers and other disorders their heroism has left them with.

But it’s Ilhan Omar who is the outrage, right? Not our gross neglect of 9/11’s heroes and not naked appeals to bigotry?. None of that. Just her.

So what will you say, America, in the awful event of afterward? Likely, you’ll say what you always say. “This is not who we are. We’re better than this.” It’s a fable we keep telling ourselves.

As practiced as we have become in seeing the betrayal of our highest ideals, we are still unable to face the contradiction, the lie, that keeps betraying them. So if unhinged hatred leads where unhinged hatred so often does, maybe the best thing we can do for ourselves, the best gift we can leave to posterity, is to at last admit the truth.

“Better than this?” No. Granted, we had a chance to be.

But we chose otherwise.