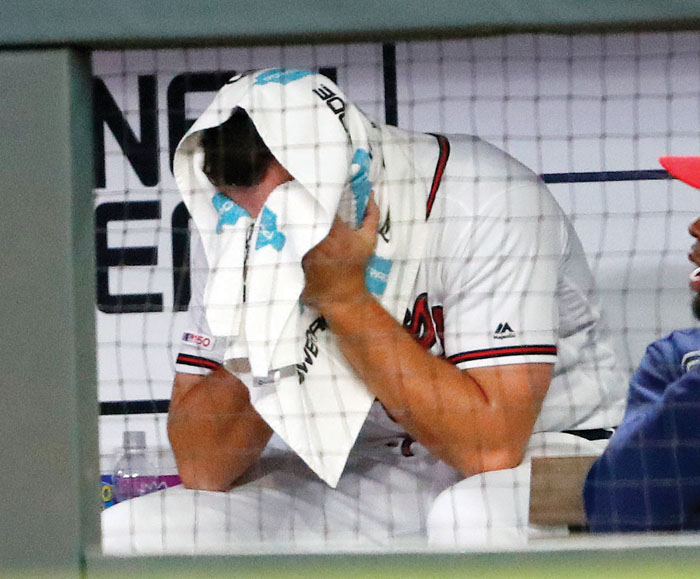 Atlanta Braves relief pitcher Jesse Biddle sits on the bench after walking in the go-ahead run in the 10th inning of the team's baseball game against the Arizona Diamondbacks on Wednesday, April 17, 2019, in Atlanta. Arizona won 3-2. (AP Photo/John Bazemore)

ATLANTA (AP) — Adam Jones worked a bases-loaded walk against Jesse Biddle in the 10th inning and also homered, lifting the Arizona Diamondbacks over the Atlanta Braves 3-2 on Wednesday night.

Biddle (0-1) filled the bases and then walked Jones on six pitches. Jones also homered in the fourth inning and scored the tying run in the seventh on Ketel Marte’s double. Arizona has won a season-best three-straight.

It was just the latest bullpen setback for Atlanta. Closer Arodys Vizcaino had shoulder surgery Wednesday and will miss the rest of the season, heightening pressure from Braves fans to sign free agent closer Craig Kimbrel.

Arizona’s Greg Holland struck out Josh Donaldson and Freddie Freeman in the 10th before Ronald Acuña Jr. looped an opposite-field single to right. Holland ended it by getting Nick Markakis to line out for his fourth save.

Biddle started the 10th by making a two-base throwing error on pinch-hitter Tim Locastro’s bunt. He walked Jarrod Dyson, got a little help when center fielder Ender Inciarte slid to rob Eduardo Escobar of a hit, then walked David Peralta and Jones consecutively. Daniel Winkler replaced him and struck out Christian Walker.

Jones cut the lead to 2-1 in the fourth with his fifth homer.

The Braves led 2-0 in the second on Brian McCann’s two-run double.

Arizona starter Zack Godley gave up two runs and five hits in six-plus innings. Matt Andriese replaced Godley after he issued a leadoff walk and escaped a jam by striking out Donaldson with a runner on second.

CHICAGO (AP) — Fiercely energetic Tim Anderson spiked his bat to celebrate a home run and Kansas City’s Brad Keller responded by drilling him with a fastball, setting off a benches-clearing fracas in the Royals’ 4-3, 10-inning victory over the Chicago White Sox on Wednesday.

Anderson tossed his bat toward the White Sox dugout following his two-run drive in the fourth inning. Keller hit him in the buttocks with his first pitch leading off the sixth.

Anderson, the AL’s leading hitter, was restrained by Royals catcher Martin Maldonado but kept jawing with Keller on the way to first base. The dugouts and bullpens emptied, though no punches appeared to be thrown. White Sox manager Rick Renteria and Royals bench coach Dale Sveum shoved each other, and the usually mild-mannered Renteria was particularly animated.

Hunter Dozier led off the 10th with a tiebreaking homer against Nate Jones (0-1).

NEW YORK (AP) — Brett Gardner hit a grand slam off Ryan Brasier in the seventh inning for his 100th career home run, and New York rallied for a two-game sweep of the reeling World Series champions.

J.D. Martinez hit a first-inning home run off Yankees starter J.A. Happ and Christian Vázquez hit a two-run homer in the second for a 3-0 lead.

Clint Frazier started the comeback with an RBI double in the fourth against former Yankee Nathan Eovaldi, and New York loaded the bases in the seventh against Brandon Workman (0-1) on Frazier’s single and walks to Mike Tauchman and Austin Romine. Brasier relieved and got ahead 0-2, then left a fastball up that Gardner drove 364 feet over the right-field scoreboard.

SEATTLE (AP) — Carlos Carrasco rebounded from one of his worst starts with 12 strikeouts, Jake Bauers hit a solo homer and Cleveland completed a three-game sweep.

Carrasco (2-2) pitched three-hit ball over seven innings, dominating as the Indians handed Seattle its sixth straight loss. The right-hander struck out the side three times and only allowed one baserunner to reach third base.

Yelich came in batting .556 with four home runs and 10 RBIs in the series, but he was 0 for 2 with a strikeout and a walk against Wacha. Yelich did single in a run in the eighth off Andrew Miller.

Wacha (1-0) bounced back after a tough start Thursday against the Dodgers. He struck out seven over six innings, allowing two runs and five hits to improve to 6-0 career against the Brewers. Jordan Hicks pitched the ninth for his fourth save.

Hector Neris blew a 95 mph fastball past Keon Broxton with a 3-2 count and the bases loaded for the final out and his second save.

Arrieta (3-1) allowed two runs and six hits, inducing three double-play grounders. The veteran righty has pitched like the ace who won the 2015 NL Cy Young Award with the Cubs. He’s thrown at least seven innings in three straight starts and lowered his ERA to 1.93.

DETROIT (AP) — Colin Moran hit an RBI single in the 10th inning and Pittsburgh beat Detroit in extras for a second straight night. It was Pittsburgh’s sixth extra-inning game already this season. The Pirates are 4-2 in those.

The game was played in rainy conditions, and Tigers left fielder Christin Stewart slipped and fell while catching Bell’s flyball in the eighth. Stewart stayed in for his plate appearance in the bottom of the inning, then left with a right medial quad spasm.

Yonny Chrinos (3-0) replaced opener Ryne Stanek in the second inning and gave up one hit in five scoreless innings. He struck out six of the first seven batters he faced.

Rio Ruiz hit his second home run for the Orioles, who have lost seven of nine.

After singles by Austin Meadows and Choi in the first inning, Lowe hit a long three-run homer off Baltimore starter David Hess (1-3). It was Lowe’s fourth homer in seven games and his fifth of the season.

Soto’s two-run drive, Kendrick’s solo shot and an RBI single by Adam Eaton put Washington ahead 4-0 against Jeff Samardzija (1-1) in the second.

Gerardo Parra and Steven Duggar each hit two-run homers in the ninth for San Francisco off rookie Austen Williams. Jeremy Hellickson (2-0) allowed two runs and five hits over 5 2/3 innings for the Nationals.

Hamels (3-0) allowed three hits and did not walk a batter. He struck out eight while throwing 65 of his 97 pitches for strikes. Daniel Descalso had two hits and three RBIs, Javier Baez homered and knocked in two, and Jason Heyward also drove in a run for the Cubs, who have won five of six.

Descalso started the scoring for the Cubs with a base hit in the second off Sandy Alcantara (1-2).