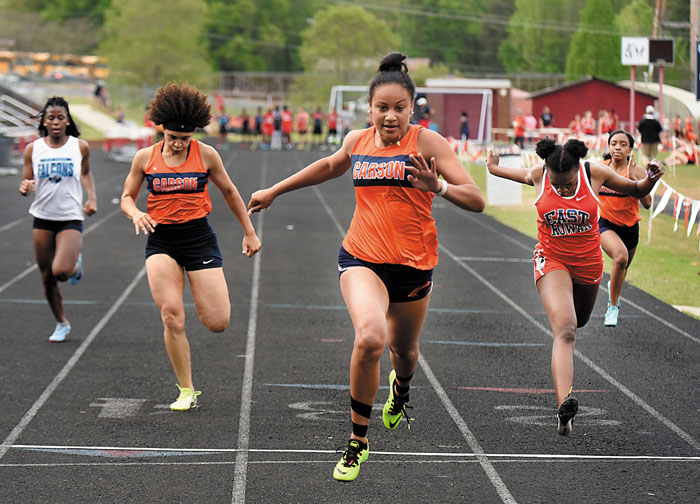 GRANITE QUARRY — Carson or South Rowan won 17 of the 18 girls events that were contested at Wednesday’s Rowan County Track and Field Championships.

“We’d win one, and then they’d win one,” Carson coach Les-Lee Ihme said. “I really thought the final score was going to be a lot closer than it was.”

It was the third straight county championship for the Cougars, who had never won one until they broke through in 2017.

The lone event that South or Carson didn’t win was the pole vault, where East sophomore Gracie Sprinkle was taught the basics of the sport by East vaulter Jax Fitz roughly 24 hours before the meet. Sprinkle, mostly a hurdler, managed to vault 7 feet for the most unusual victory of the day. Pole-vaulting is physics and courage. Sprinkle who is light and fast may have a future in the sport.

“Every point counts for the team, and Jax helped me figure things out as far as getting in the air,” Sprinkle said. “I showed I could clear the starting height, and they told me I could try today. Now I’m the county champion. That’s pretty crazy.”

“Brianna got second in the pole vault today, but she pulled something in her shoulder and couldn’t really move her shoulder or neck the rest of the day,” Ihme said. “She still won the 300 hurdles, finished third in the 100 hurdles and helped us win the 4×200. She was huge.”

Hargrove went tumbling after reaching the finish line in the 300 hurdles, but she dusted herself off and embraced runner-up Lakayla Birst from North.

“I wanted it,” Hargrove explained with a smile. “But I couldn’t have done as well as I did without the good competition.”

Gadson finished ahead of three different challengers in sweeping the sprints and claiming Sprint MVP honors. In the 200, her closest pursuer was Downs, who shared Field MVP honors with Carson’s Parker.

“Two steps,” Downs said. “I was two steps from having a great day, but the team did have a great day. I don’t think anyone expected us to do as well as we did.”

Gadson defended her county championships in the 200 and 400 and added the crown in the 100, an event in which she finished second last spring.

‘We were worried with all the rain, that those girls might have to make up a soccer match today and wouldn’t be with us,” Ihme said. “We got a break.”

Isley was all over the infield oval, winning the triple jump and taking second in the shot put. Taylor Conrad was fifth in the 1600.

“I’m playing soccer, so I’d only been in two track meets and I had zero track practices,” Conrad said. “But I was able to help out with a few points.”

Nancy Gamewell contributed a second place in the discus. The Cougars’ 4×400 and 4×800 units placed second.

Hughley was a third-place machine for the Cougars, taking the “bronze” in all three sprints. Those three third places were worth 18 points in a meet that scored 10-8-6-4-2-1, and she also ran a leg on the winning 4×200 team.

“We only had 19 girls today,” Ihme said. “So we had to put some people like Hughley in four events.”

South was excited about contending for the first time in a while and provided enough noise volume for 10 teams.

Lowery was outstanding in cross country and track as a South junior before transferring to Forestview High in Gastonia. She came back to South in time to compete in a handful of indoor meets last winter and has been a force in the outdoor season despite a painful case of “Runner’s Knee.”

“Obviously, getting Madison back at South changed a lot of things for this team,” said Hunter Moody, one of South’s coaches. “Not just the points she scores, but now she’s pushing Bethany Rymer, who is also having a great season.”

“I’ve learned a lot,” Lowery said. “When I ran for South before I was running as an individual, running mostly for times, but I’ve learned that it’s just as important to push my teammates to be at their best. Now I run for my team. Competing the way we did today was exciting.”

Lowery practiced what she preached. As the 4×400 was being contested, Lowery, whose day was done, sprinted across the infield to cheer on a teammate sprinting on the backstretch. She must have helped. South won the event, with Elliot on the anchor leg.

“I’ve never seen the girls as fired up as they were today,” South coach Rebekah Julian said. “We’re excited and we’re improving. South is coming back.”

Besides winning the long jump and high jump, Downs made a thrilling comeback as the anchor to  lift’s South’s 4×100 team to victory.

South sophomore Taylor Chapman, who didn’t compete as a freshman, won the 100 hurdles.

South got second places from Carlie Moore in the high jump and Kira Rymer in the triple jump.

Gracie Sprinkle’s pole-vault victory was the headliner for third-place East. The Mustangs got second places from Azaria Jones in the 100 and Katelyn Sprinkle in the 100 hurdles, as well as the 4×200 and 4×100 relays.

West’s Deja Phillippe finished second to Gadson in the 400, just as she did last year.

Birst, a senior, was the top performer for North. Besides hounding Hargrove to the wire in the 300 hurdles, she placed third in the high jump. In the high jump, Downs, Moore and Birst all cleared 4 feet, 10 inches, but Downs took first place based on fewer misses.

Sometimes it was that close on Wednesday, but Carson got it done again.

“You’ve got some girls out there now who want to lose so their season will be over,” Ihme said. “Then you’ve got girls like we are so lucky to have, girls who might be playing soccer, but who would do anything for their school, so today they were track people. That’s called heart, and it’s not something that you can teach. You have it or you don’t.”