SALISBURY — The Rowan County Sheriff’s Office has identified the fourth woman suspect in a March robbery at Dick’s Sporting Goods during which an employee was sprayed with an unknown substance initially thought to be pepper spray.

Officials said with much help from the public, the fourth woman was identified as 18-year-old Makayla Nyasia Jackson of Charlotte. She has not been arrested.

One woman, Deneisha Brown, 23, of Charlotte, was arrested in Charlotte in early April and charged with robbery with a dangerous weapon in connection with the case. 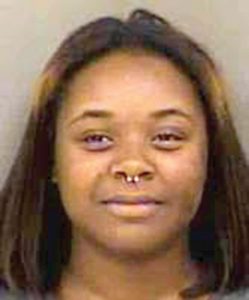 About 2 p.m. March 17, three women entered Dick’s Sporting Goods on Julian Road in Salisbury, authorities say. The women gathered clothing and walked toward the exit without paying for the merchandise. A store employee tried to confront them, and one woman sprayed him in the face with an unknown chemical agent.

The suspects ran from the store and left in a gray four-door Honda Accord with the license tag removed. They may also have used a second four-door, burgundy car.

The store employee was treated for the chemical attack.

The fourth suspect in the case will face charges of felony robbery with a dangerous weapon.