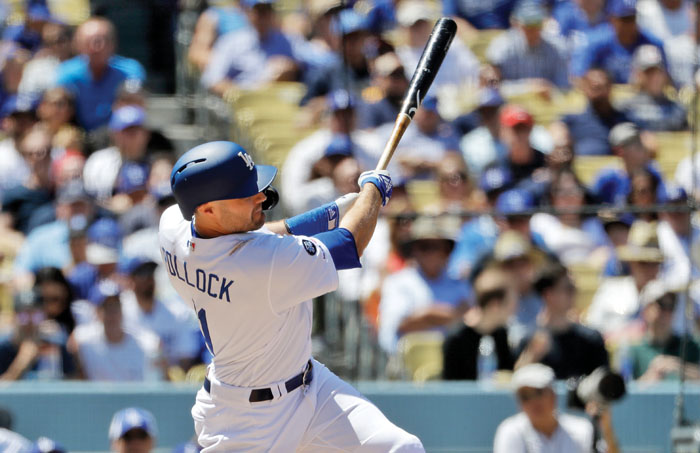 They only got one against Sonny Gray and the Cincinnati Reds, and it was all they needed.

A.J. Pollock hit a three-run homer in the sixth inning, and the Dodgers tied the big-league record by hitting a homer in their 32nd consecutive home game during a 3-2 victory Wednesday.

Pollock broke open a scoreless game when he connected off Gray (0-3), providing the Dodgers with all of their runs in their fourth consecutive victory. The Dodgers don’t ascribe much importance to their streak, other than the majors-best nine home victories generated from it.

“It’s a cool stat, for sure,” Pollock said. “Honestly, there’s a lot of power on this team. These guys are really trying to do damage. They’re trying to get pitches to hit, and we like hitting at home.”

Los Angeles has homered in every regular season game at Dodger Stadium since last Aug. 21, including 13 straight this season. While the Dodgers matched the mark set by the Colorado Rockies over three months of the 1999 season, they won’t get the chance to break it until April 26 when they return from a road trip.

Gray remained winless with the Reds despite a fourth straight solid start, yielding only two hits and striking out nine over six innings. After the Reds intentionally walked Cody Bellinger, Pollock drove his low curveball into the left field bleachers.

“The Dodgers, they’ve got a great lineup,” said Gray, who was happy with the location of his fateful pitch. “They’re going to grind. They’re going to put pressure on you.”

The back-to-back defending NL champions are second in the majors this season with 38 homers in 20 games. They’ve hit a majors-best 27 homers in their 13 home games, starting with a record eight homers on opening day to pick up right where they left off last September, when they finished second in the majors behind the Yankees with 235 homers.

Walker Buehler (2-0) pitched three-hit ball into the seventh inning for the Dodgers, striking out eight and allowing one unearned run.

“He’s kind of like (a) sports car,” Dodgers manager Dave Roberts said of his prized right-hander, who gave up five earned runs in two of his first three starts this season. “If there’s anything just not right, then he’s off. He worked through it, and we needed that one.”

The Dodgers made two errors and allowed a run in the ninth, but Kenley Jansen persevered for his fifth save.

Yasiel Puig scored both of Cincinnati’s runs against his former team, but the Reds have lost four straight. Cincinnati is 0-7 on the road.

Both teams finished the brisk game with just three hits, but Los Angeles wrapped up a six-game homestand with a three-game sweep of Cincinnati.

Braves’ closer Vizcaino out for season