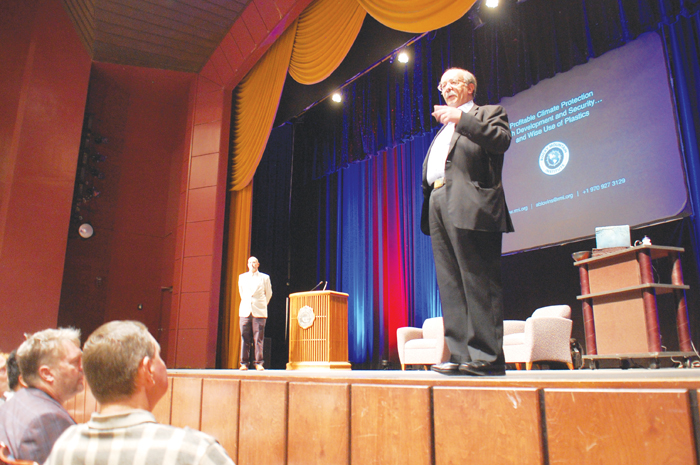 SALISBURY — Amory Lovins, one of the top energy thinkers in the world, says a common question he often hears from audiences is, “So why isn’t this happening?”

And it takes him by surprise.

“It typically happens after I give them a half-hour of evidence that an energy revolution is happening much faster than they realize,” Lovins said in an interview with the Post on Wednesday afternoon, “but somehow that skates past.”

Lovins gave much more than a half-hour of evidence of a rapidly changing energy world — one in which he says Edison’s electric and Ford’s car industries are combining to eat Rockefeller’s oil industry.

Lovins, chief scientist, co-founder and chairman emeritus of the Rocky Mountain Institute, spoke to a crowd of more than 300 people at Catawba College’s Keppel Auditorium on Wednesday evening. His topic: “Transforming the Energy System for Security and Prosperity.”

Lovins used charts, data, photographs, illustrations and graphs to drive home the point that renewable energy sources are not only driving dramatic change, but they signal the transition from an age of carbon to an age of silicon.

In speaking with the Post, Lovins described a United States by 2030 where more electric cars will be sold than gas cars, where solar panels on residential rooftops will be the norm, where utility companies will be rewarded by cutting your bill and not selling you more energy, where there will be fewer power failures and a more resilient energy supply.

“Some electric, gas and oil companies are leading the transition,” Lovins told the Post. “Others are hoping it will go away or hoping they can manage it. Neither of which will work.”

If he were like President John F. Kennedy in the early 1960s, making it a national goal to put a man on the moon by the end of the decade, Lovins was asked by the Post what national energy goal would he want by 2030.

“By 2030, the United States should have a vibrant economy and a much more secure and resilient energy system, using energy nearly twice as efficiently as now,” Lovins said. “Using almost no coal and well on the way to getting off oil and mostly off gas in the 2040s. We will have saved by then well over a trillion dollars making that shift.”

And he stressed it will be a shift led by companies who want to make a profit.

“Business-led and market driven,” he said. “Enabled by smart policies, particularly at the state and local levels.

“We don’t actually need to have any new federal laws to get completely off coal, oil and nuclear by 2050 and at least one third off gas (to make it) $5 trillion cheaper. If we had smart federal policies, that would help.”

Lovins said with the help of 60 colleagues he laid out a profit-driven scenario for this kind of energy revolution in 2011 with the book, “Reinventing Fire: Bold Business Solutions for the New Energy Era.”

“I can tell you in the first eight years of that 40-year journey, it’s almost exactly on track,” Lovins said. “I think that’s largely because the private sector smells that $5 trillion — and that’s exactly what should happen.”

By now, Lovins said, he and the others realize theirs was a conservative analysis. Renewable electric growth is happening at a greater pace because prices “have come down sooner than we assumed,” and energy-efficiency potential is bigger than anticipated.

“Renewable (energy) can achieve increasing returns,” Lovins said. “The more you buy, the cheaper it gets. That’s a surprise to many people.”

Some countries, such as Holland, already allow people to buy renewable energy from each other. Also in the world scenario Lovins says we are going toward, electric and gas companies will be rewarded for cutting your bill, not trying to sell you more energy.

“If you continue to do things the old way, you’re probably out of business (by 2030),” Lovins told the Post, “and if you jump on the train pulling out of the station, you could do very well.”

By 2030, Lovins thinks it will be “obvious to everybody” that renewables are the answer to many things.

You could like renewable energy sources for the profits and jobs they create, because they give you a competitive advantage, for public health reasons, for environmental reasons, for climate protection or for local and national security.

“They’re all good reasons,” Lovins said, “but you you don’t have to agree which reason is most important. Any one or more reasons will do. That bypasses a lot of argument.

“You just need to focus on outcomes. For whatever reason, we all have different priorities. We could end up working together for the common good on a unifying energy solution regardless of our politics.”

Lovins said the energy system is going and will keep going from centralized to distributive, from wasteful to efficient, from brittle to resilient, from centrally planned to democratized — one of individual choice and competition.

“There are a lot of different changes going on,” he said. “The energy system is changing from fossil and nuclear fuels to renewables, also from fuel to much more electrified, but very efficiently electrified.”

Lovins himself has two electric cars — one American and one German. ‘We’ll be getting rid of our last dino-juice consumer in another month or two,” he said.

“The established automakers are scrambling to catch up before they become irrelevant. In fact, the head of GM was recently heard to remark — I think the way she put it — ‘We’ve designed our last gasoline engine.'”

Around 2023 or 2024, the price of an electric car will be the same as a comparable gas car. “That’s the sticker price,” Lovins said. “The running cost is very much less in both fuel and maintenance.”

During the 2020s, utilities could readily lose half their revenues as rooftop solar becomes more prevalent. Lovins noted a couple of states in Australia already have a third of their homes with solar on the rooftops.

Several other countries are forging ahead of the United States in the use of renewable energy such as sun, wind and geothermal. This year, China is expected to go from selling a million electric cars to 2 million, and that will represent half of the world’s total.

China also is making about 75 percent of the world’s solar panels and most of its wind turbines. “We’re behind many (countries) and most of all, we’re behind China,” Lovins said.

Wednesday night’s program was hosted by the Center for the Environment at Catawba College, in partnership with Clean Air Carolina, the N.C. Chapter of the Sierra Club, the N.C. Sustainable Energy Association, the N.C. Conservation Network and Catawba’s Department of Environment and Sustainability.

In North Carolina, Lovins helped launch the energy-efficiency revolution that has saved over $1 billion so far on state college and university campuses. He has written 31 books and more than 630 papers,  while also designing ultra-efficient buildings, vehicles and industrial plants.

The Post asked Lovins whether he is optimistic or pessimistic about the country’s energy future.

“Neither,” he answered, “because those are forms of fatalism. They’re simplistic surrender to treating the future as fate, not choice, and not taking responsibility for the future you want.  So I live instead in the spirit we call ‘applied hope.’ … It’s really applied, created day by day by your choices, so you build a world worth being hopeful about.”

Local visitors to Notre Dame are heartbroken by fire,…