With City Park courts set for change, pickleball squares off against tennis 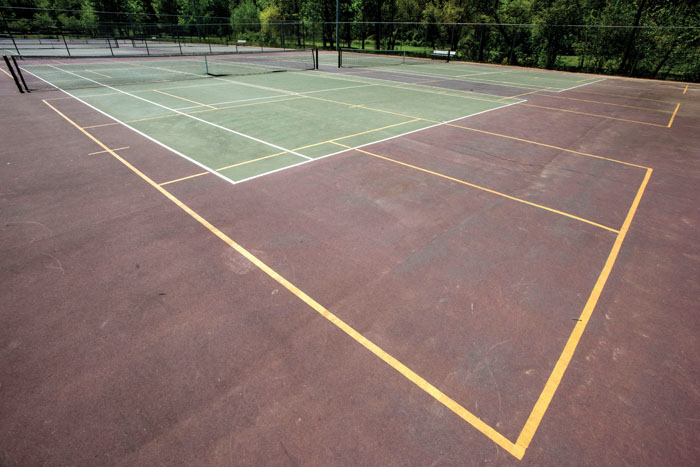 Currently, the city offers temporary pickleball courts at Hall Gym, but the courts are available only for a “small amount of time during the week,” said Parks and Recreation Director Nick Aceves. The courts are used for basketball most of the time, Aceves said.

Parks and Recreation will spend about $1,000 for the conversion of the courts at City Park. Other money is coming from several private donors, said Jon Post, a member of the Parks and Recreation Advisory Board and a frequent pickleball player. Post also helped draft the pickleball court conversion idea and and helped raise money. A total of about $25,000 was approved for use at the Jan. 2 Salisbury City Council meeting.

Pickleball is one of the fastest-growing sports in the community, a driving reason for conversion of two courts, Aceves said

Where is the next generation?

Some local tennis players said they consider the conversion to be “shady.”

It would have been nice if there was a public hearing or more people were heard on the issue, Rufty said.

The change is akin to “dismantling” hard-earned U.S. Tennis Association courts, says Reid Leonard, a former member of the Parks and Recreation Advisory Board, who also helped raise money for the City Park courts to be built. While Leonard agreed that pickleball is becoming more popular, he said the sport is not very popular among younger people.

And Linn Waggoner, whose daughter plays tennis, wonders whether the sport of pickleball might dry up without interest among young people.

“If we take away the courts from the tennis players, where is your next generation of pickleball players coming from?” Waggoner asked.

Some tennis players said they’re not convinced the remaining tennis courts will meet the tennis community’s demand after the change.

Tennis fans are losing places to play, Rufty said. If the City Park courts are converted for pickleball, the only USTA-approved courts available in the city would be at Catawba College or Salisbury Country Club. For both, you need to be a member to use the facilities, Rufty said.

“Bottom line is these courts need to remain as tennis courts and, if the pickleball players would like new pickleball courts, they should buy land and build these just like anyone else would have to do,” Rufty said. “If this sport is such a growing sport with so many playing it, then funding this should not be an issue.”

But Jon Post says the tennis courts are never at full capacity. He said he has never seen more than the three of the courts at City Park full at the same time.

David Post — a City Council member, frequent pickleball player and brother of Jon — says there are a lot of tennis courts throughout the county.

Aceves says the city has met the needs of tennis players and need to meet the demand of a burgeoning sport. The introduction of pickleball courts at City Park is part of an effort to meet a wider demand in the community, he said. Parks and Recreation does not have funding to build new courts and cannot campaign for private funding, he added.

The need for tennis courts is as high today as it has been in the past, Leonard said. High school and regional matches need use of all six courts, he said.

Missy Utley, who grew up playing tennis on the courts, echoed that sentiment.

But Jon Post said that the only schools using the tennis courts are not in the city limits.

Leonard said the courts are needed for the annual Rotary tennis tournament. But David Post said the tournament moved its headquarters to Catawba College last year.

In addition to the conversion of courts No. 1 and No. 2, so-called “Ts and elbows” will be added to four other City Park courts, Jon Post said. This will allow these courts to serve as temporary pickleball courts to meet the demands of tournaments.

The courts were built in 2009, Leonard said, after the city had been working to save money for them for several years. They replaced courts at the same location that were built in 1965.

Salisbury is behind the times, Jon Post said. In an email to the Salisbury Post, he said more than 10 cities in the Piedmont area have dedicated, public pickleball courts.

Asked if the conversion of the courts is necessary when there are already pickleball courts in Dan Nicolas Park, Jon Post said the distance to Dan Nicolas is too far for many, especially when it closes at dusk.

Local visitors to Notre Dame are heartbroken by fire,…