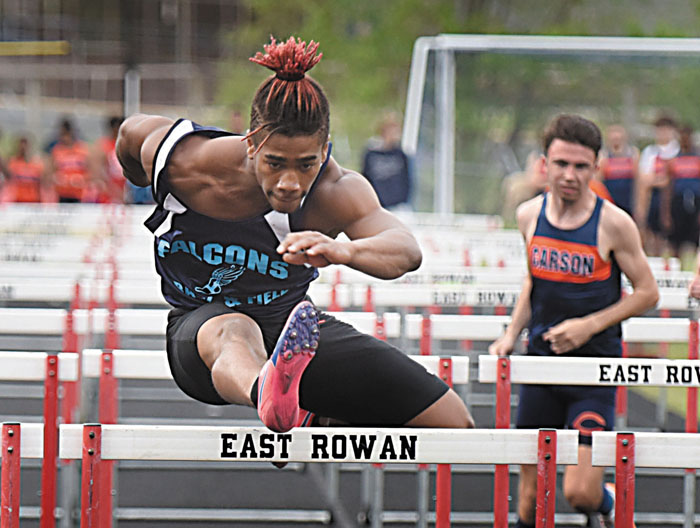 Wayne Hinshaw/for the Salisbury Post ... West Rowan’s Jalen Houston, scored 30 points by himself on Wednesday, leading the Falcons to the title at the Rowan County Track & Field Championships at East Rowan. Houston won the 100 dash (in 11 seconds), the 110 hurdles and the 300 hurdles.

GRANITE QUARRY — Even if you’re not a numbers person, this one can’t be ignored: 130.

“A hundred and 30 — and not a single point more,” he said at East Rowan High School, where the Falcons won their first title since 2016. “I was a little surprised we won with the numbers we had. Before the meet, I said, ‘We gotta score 130 to have a chance.’ I didn’t think we’d win the meet with that, but it’s all I thought we could score. And that’s exactly what we scored, isn’t it?”

“I come away feeling that if we don’t get DQ’d in the 4×2, we win the championship by one,” said disappointed East coach John Fitz. “That’s the fact of the matter.”

East failed to pass the baton inside the exchange zone on both the first and last handoffs. West, which initially placed second in 1:38.84, was elevated to first place, making for a 12-point swing on the team scoresheet.

“I don’t know how we did this,” Ellis said in his back-porch vibe. “We had a lot of quality, not quantity, and just enough of it. They tell me you can win with that kind of team.”

“In the 100, my strategy was mostly to push off the block as fast as I could,” Houston said, after winning the 100 for the second straight year. “Then just relax and keep my pace up. I felt like I ran with the wind.”

“The 1600 is my favorite race,” Waldo said, after edging South sophomore Noah Julian (4:41.69) by less than a second. “I sat behind Noah the whole race and started pushing him in the last two (hundred meters). My final lap was like 65 seconds. I’ve never done a final lap that fast, but it’s my senior year. Finally my turn.”

Ellis, now in his 25th season, anticipated contributions Houston and Waldo. “But the jumpers, I think, was the difference,” he said. “And our shot-putter (Colton Evans) finished fourth — he was seeded sixth or seventh.”

Also noteworthy was Jeriah Ford, who placed fifth in the high jump in just his second meet.

“Today, I ran everything hard,” said Julian, who bested runner-up Zach Barbee of Carson by more than 24 seconds. “In the 3200, I was under my lap pace the whole time. I wanted to lead the race and they just let me.”

Carson senior Teolyn Woodruff was seeded No. 2 in the shot put, but his personal-best throw of 47-2 won the competition. “It came on my very last throw,” he said with a smile. “I just had to stay calm, be relaxed and throw. You can’t over-think it.”

The last MVP award presented went to Salisbury’s Johnson, who accumulated 18 points and shared the field events honor with Bennett. Johnson won the long jump (21-2) and was was second in the triple jump. As a sprinter, he won the 200 (22.25) for the third straight year and placed second in the 100 (11.19).

“The 200 is a tough race because you sprint from start to finish,” he said. “I’m proud of everything I did today. I gave it my best.”