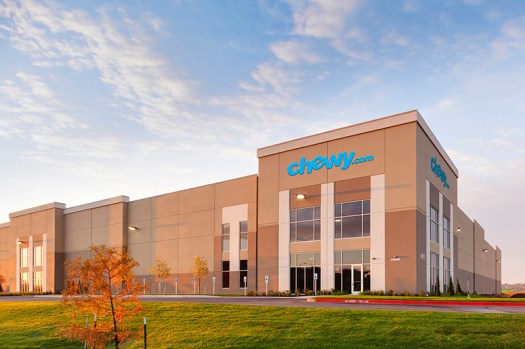 Submitted rendering - This image is a rendering of the front of Chewy's proposed distribution facility on Long Ferry Road. The company is planning to create more than 1,200 jobs.

Submitted rendering - This image is a rendering of the front of Chewy's proposed distribution facility on Long Ferry Road. The company is planning to create more than 1,200 jobs.

SALISBURY — Chewy, an online retailer of pet food and other pet products, will bring a fulfillment center to Rowan County that will create 1,200 jobs, Gov. Roy Cooper announced Wednesday.

The 700,000-square-foot facility will be built on the Trevey Site, located at the intersection of Long Ferry Road and Interstate 85 at Exit 81. The facility will be a $55 million investment. A tax incentives agreement states the 1,200 jobs would be created by 2025, with steady increases in the years prior. The average salary for the jobs is projected to be $28,388 per year. The jobs will come with benefits, according to the Rowan County Economic Development Commission.

“This project means more jobs, investment and momentum for our community, and we couldn’t be more excited about the future,” Crider said. “What pleases us most though is that the 1,200 new jobs that Chewy is bringing to the area will provide new opportunities to local job seekers and a chance for more Rowan County families to live their American dream.”

The projected job figure would put Chewy among the top three private companies in Rowan County along with Food Lion and Daimler Trucks, according to the EDC.

A groundbreaking for the new Chewy facility will be held May 2. Construction is expected to be complete in June 2020.

“Chewy selected North Carolina because from our infrastructure to our workforce, we have everything businesses need to succeed,” Cooper said in a news release. “These new jobs will make a positive impact on Rowan County and the surrounding area.”

Rowan County Commissioners Chairman Greg Edds said local officials are honored and proud that Chewy chose Rowan. Other sites being considered were in South Carolina and Georgia. Edds said the announcement will keep Rowan County “moving in the right direction.”

“We are grateful to them for creating 1,200 new jobs for Rowan County families, and I commend them on their success,” Edds said.

Chewy, owned by PetSmart, has dual headquarters near Miami — in Dania Beach, Florida — and in Boston, according to its website. The company has fulfillment centers from Arizona to Pennsylvania.

The opportunity began to materialize about a year ago when NorthPoint Development of Kansas City approached the Rowan County Economic Development Commission. That Chewy was the company for which NorthPoint was seeking land wasn’t known to the EDC until about two months ago, Crider said.

“In a very competitive multistate development, Rowan County and the state of North Carolina came out on top,” said Ian McDonald, vice president of development for NorthPoint. “In the end, the outcome is simply that a great company, Chewy.com, is investing in a great community, Rowan County.”

Crider said Rowan County was attractive to Chewy because of the availability of potential employees, with the site’s proximity of Charlotte, the Triad and the Piedmont. Long Ferry Road, the project site, is the last interstate exit before the Yadkin River and Rowan-Davidson county line for motorists headed north on I-85.

Local officials’ interest in Chewy was strengthened after hearing a story about how the company responded to the death of a dog owned by the family of Rowan County Planning Director Ed Muire.

Muire said Chewy contacted his family after altering its “auto-ship” feature. Muire said his family had to “put down” their dog, Cicero, on Feb. 15. The next week, Muire’s family received condolence flowers from Chewy. Muire spoke to other pet owners about his experience, and they relayed similar experiences of customer service.

Crider said that action showed the company has the same values as the local community.

Rowan County also has applied for a Community Development Block Grant in the amount of $1.5 million to install a sewer line to serve the building site.

The state provided a performance-based grant of $166,650. Additional funding for the project was provided by Duke Energy Corp. through its Carolinas Investment Fund.

The fulfillment operation will be Chewy’s first in North Carolina and ninth in the country.

“We greatly appreciate the partnership with Rowan County, the Rowan EDC, North Carolina Department of Commerce and the Economic Development Partnership of North Carolina,” said Pete Krilles, Chewy’s vice president of corporate real estate and facilities. “We look forward to making a positive economic contribution to the region with the creation of 1,200 new jobs.”

Companies like Chewy will find success in North Carolina because the state has a strong workforce and desirable business climate, said state Secretary of Commerce Anthony M. Copeland.

“Pair that with our location and quality of life and you’ve got a winning formula,” Copeland said in a news release.