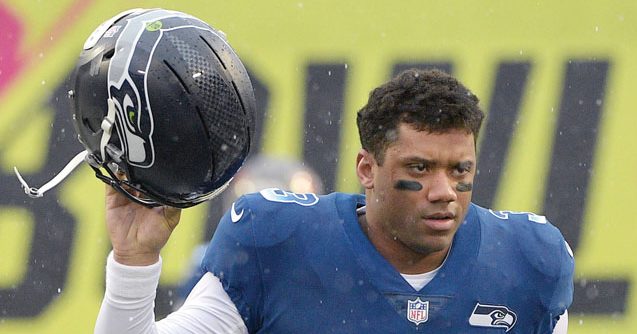 Seattle's Russell Wilson injured a finger on his throwing hand and left in the second half of the loss to the Rams. (AP File Photo/Phelan M. Ebenhack)

RENTON, Wash. (AP) — With one 15-second video clip posted on social media shortly after midnight and five simple words, Russell Wilson put to rest any questions about his long-term future.

No more speculation about Wilson wanting to play elsewhere. No more rumblings of a bigger market for Wilson to call home.

“Seattle, we have a deal,” Wilson said in the video early Tuesday morning.

They were words Seahawks fans had waited to hear since Seattle’s playoff loss to Dallas in January, though it had seemed increasingly unlikely as the days ticked away toward Wilson’s deadline to have a deal done by the end of the first day of offseason workouts.

But they did strike a deal, one that makes Wilson the highest-paid player in the NFL and gives Seattle the chance to build a competitive roster around its star quarterback.

“Russell’s goal and his hope was that he would continue his career with the Seahawks and continue to bring championships to this town,” Wilson’s agent Mark Rodgers said. “He believes there is still unfinished business and he is looking forward to pursuing that without having to worry about contracts and his future.”

Wilson’s $140 million, four-year extension puts him at the top of the NFL salary food chain for now. He has the highest yearly average salary at $35 million per season. He has the highest signing bonus ($65 million) and guaranteed money ($107 million) in league history.

And for good measure, Wilson also got Seattle to agree to a no-trade clause.

“Russ has been a huge factor in everything that has happened, and this allows us to stay on track with continuing to push to find that consistency,” coach Pete Carroll said in a statement from the team announcing the deal. “Russell is a unique player, a unique competitor. It’s rare the way he’s just so consistently connected to competing and battling. To keep that factor as part of the program is just a real positive for our fans and for everyone. We’re all fortunate to see this happen.”

The 30-year-old Wilson had set a midnight Monday deadline for a new deal with Seattle. He wanted certainty about his contract before the team got into its offseason workout program, which began Monday. Wilson showed up for the first day and by the end of the night was sending social media into a frenzy after posting the video of  him and his wife, Ciara, announcing the agreement.

Wilson’s annual average tops Aaron Rodgers’ average annual salary of $33.5 million as part of the $134 million extension he signed last year with the Green Bay Packers. Wilson’s previous $87.6 million, four-year deal was signed at the beginning of training camp in 2015 and was set to expire after next season.

Wilson was the second-highest paid player in football behind Rodgers when his deal was signed in 2015, but he had fallen to 12th among NFL QBs, according to Overthecap.com.

Carroll said Jody Allen, the chair of the Seahawks following the death of her brother, Paul Allen, last fall, was instrumental in getting the deal finished.

“She was involved, and her support really allowed the guys to function at the level where they were able to get this done,” Carroll said.

Seattle had leverage knowing it had at least three more seasons with Wilson. Even if he played out 2019 under his current deal, Seattle could have used the franchise tag if needed to keep him under contract through 2020 and 2021 at reasonable prices by QB standards.

Wilson, a five-time Pro Bowl selection, is coming off arguably his best season.

The 5-foot-11 Wilson threw for a career-high 35 touchdowns and matched his career low with seven interceptions. He attempted only 427 passes — his lowest total since his second season, when Seattle won the Super Bowl — but he had a career best 110.9 passer rating. He also ran only 67 times, a career low, as the improved running game and offensive line play allowed Wilson to stay in the pocket more often.

Wilson has led the Seahawks to the playoffs in six of his seven seasons, the only miss coming in 2017. He won a Super Bowl in his second season and got back to the championship game a year later before making the mistake that will hover over him until he wins another title, throwing a goal line interception in the final minute when the Seahawks had a chance to take the lead on New England.

“When I first got drafted in 2012, I wanted to be here forever. This helps solidify that. I’ve got many more years to go and a lot more winning to do — we’ve got more Super Bowls to win. I’m excited about that,” Wilson said.

ALLEN PARK, Mich. (AP) — Detroit Lions quarterback Matthew Stafford did not join his teammates at voluntary workouts Tuesday and later in the day, his wife was packing for a hospital visit.

Stafford’s wife, Kelly, announced earlier this month she plans to have surgery to remove a brain tumor. She posted on Instagram two days later, thanking everyone for an outpouring of support .

“I’m excited for this journey to come to an end and move on with my life!” Kelly Stafford posted Tuesday night.

Lions center Graham Glasgow sent Stafford a text about two weeks ago after Kelly Stafford shared details of her health and spoke to him recently.

“It seems like he’s doing well and I think their family is doing well,” Glasgow said.

Matthew and Kelly Stafford have three children. They began dating at Georgia, where he was the star of the football team and she was a cheerleader. She had vertigo spells within the last year, and an MRI showed a tumor on cranial nerves.

“Him and Kelly are extremely tough people and this is something that is bigger than football,” Glasgow said.

Stafford, who has been at the team’s training facility this offseason, was drafted by Detroit No. 1 overall in 2009.

He has spent his entire career with the franchise.