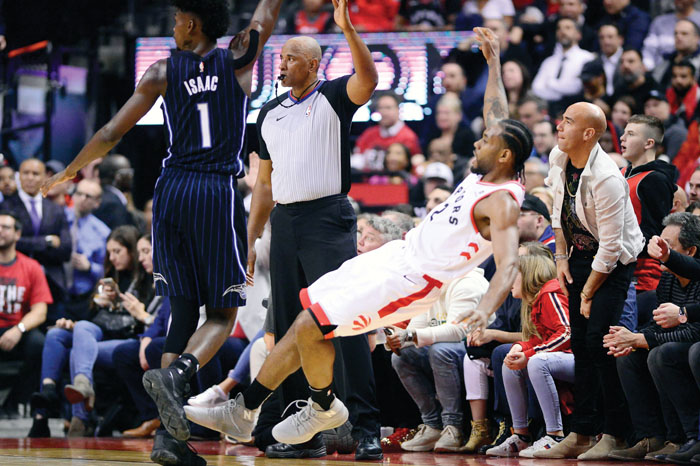 Toronto Raptors forward Kawhi Leonard (2) falls backward as he makes a 3-point basket, next to Orlando Magic forward Jonathan Isaac (1) during the second half of Game 2 of an NBA basketball first-round playoff series Tuesday, April 16, 2019, in Toronto. (Frank Gunn/The Canadian Press via AP)

TORONTO (AP) — Kawhi Leonard scored 37 points, Kyle Lowry bounced back from a scoreless playoff opener with 22 and the Toronto Raptors routed the Orlando Magic 111-82 on Tuesday night, evening their Eastern Conference first-round series at one win apiece.
Pascal Siakam had 19 points and 10 rebounds for the Raptors, who never trailed and led by as many as 34.
Game 3 is Friday night in Orlando.
Despite playing in foul trouble for much of the night, Leonard finished with a career playoff-high 15 field goals. He made his first nine attempts from inside the arc before missing a layup. He shot 15 for 22 before leaving to a standing ovation with 4:46 remaining and Toronto ahead 104-73.
Lowry, who missed all seven attempts in Game 1, shot 8 for 13 and added seven assists.
Aaron Gordon scored 20 points, Terrence Ross had 15 and Evan Fournier 10 for the Magic, who won Saturday’s Game 1 104-101 on a tiebreaking 3 by D.J. Augustin with 4.2 seconds to go.
NUGGETS 114, SPURS 105
DENVER (AP) — Jamal Murray missed his first eight shots before a scorching fourth quarter in which he scored 21 of his 24 points, leading Denver past San Antonio and knotting their playoff series at a game apiece.
The Nuggets were in danger of losing a second straight game at the Pepsi Center after posting the NBA’s best home record (34-7) during the regular season. They trailed 78-59 late in the third quarter before closing the game on a 55-27 run.
The series shifts to San Antonio, where the Nuggets haven’t won since 2012, for Game 3 on Thursday night.
Paul Millsap added 20 points for Denver and Nikola Jokic just missed his second triple-double of the series, scoring 21 points, pulling down 13 rebounds and dishing out eight assists.
The Spurs got 31 points from DeMar DeRozan, 24 from LaMarcus Aldridge and 17 from Derrick White.