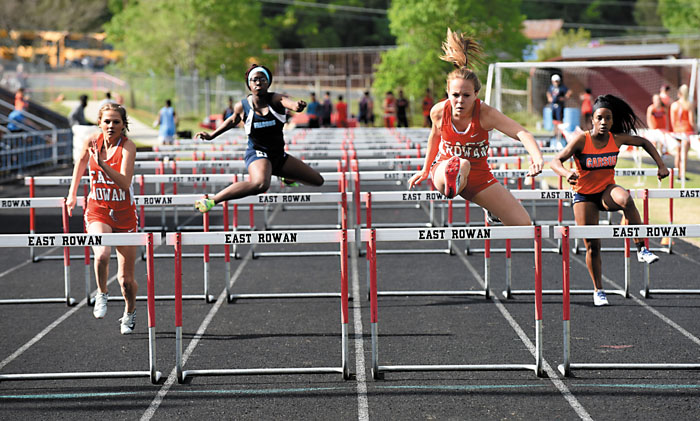 If you search the NCHSAA track and field record book, those long lists of individual and team state champions, there are 178 Rowan references.

Usually North is in front of Rowan, but sometimes it’s West, East or South. You’ll also find Salisbury in the record book 53 times.

Back in 1941, a Salisbury youngster named Julian McKenzie ran the mile in 4:31.80 to win the state championship. That appears to be the oldest reference to Salisbury in the state’s T&F record book.

The mile run is one of many “obsolete” track events as far as the NCHSAA is concerned. For the timed events, the NCHSAA made the transition from miles and yards to meters in 1980. The mile run (1609.344 meters) was replaced by the 1600 meters.

Six Rowan athletes still hold state meet records for their classifications, even though their events are not obsolete. New runners and jumpers take aim at those marks every year, but each year they survive.

• North’s Brian Ellis set the 3A triple jump record of 52 feet, 1.5 inches in 1991. That’s also the best mark ever recorded in a state meet, regardless of classification.

Rowan athletes also hold one relay record for the state meets. Back in 1987, North’s Jasper Cuthrell, Adrian Steele, Anthony Brittain and Harvey Archie ran the 4×400 in 3:21.43 for a 2A record that is still waiting to be topped. That time would’ve won the 2018 county competition by 20 seconds.

Which reminds us that a lot has changed in track and field in Rowan County. North, once a perennial state champion, has miniscule numbers now. Salisbury, once North’s chief challenger, is almost in the same boat.

As far as the county, the balance of power has swung. East Rowan ate the dust of the Cavaliers for a long time, but now the Mustang boys win the county just about every year. They’ve claimed 10 of the last 12 county meets.

As far as the girls, Carson, the new kid on the block, has moved into position to take over on an annual basis.

Winning regional and state championships is all about having  a half-dozen elite athletes, but when it comes to winning at the conference or county level, it’s all about depth. East’s boys and Carson’s girls throw serious numbers into the fight. That’s why they’ll be favored to defend their titles when the Rowan County Championships crank up again today in Granite Quarry. This will be the 51st county boys meet.

“I know a lot of kids these days say it’s too much running, but it is track, after all,” said John Fitz, who is the general of East’s small army of coaches. “We had 97 kids come out, and that’s really good. Track and field is still a pretty big deal at East.”

More than 10 percent of East’s student body in on the track and field team.

The 4×800 and the field events (those are the throwing and jumping events inside the oval) will start at 4 p.m. today at East.

East’s run began in 2007. There have been brief interruptions — by North in 2011 and by West in 2016 — but East has just kept on winning meets, including the last two.

This year’s boys meet figures to provide more drama than the girls side of things.

“I expect it to be close between us and Carson and South,” Fitz said.

East’s county victories once were centered on distance running, but the Mustangs have made a transition to being strong in the sprints. East should be good in the 4×100 and 4×200 today. East’s contingent is led by Sam Wall and Sammy Pinckney, who sprint and jump, and thrower Christian Bennett. All three are household names in football.

Fitz also expects a big meet from Jacob Downing, who was hurt much of the spring. He’ll be someone to watch in the 200 and 400.

East has two good pole vaulters (Caleb Jones and Jax Fitz) in an event in which the county is down a lot from its former glories.  Adam Whitley is expected to lead East’s distance people.

Carson has a lot of strengths, with throwers Joseph Collins and Teolyn Woodruff, jumpers Hunter Courtney and Gabriel Wicks, and hurdlers Christian Turner and Utah Brown. Zac Barbee and John Sokolowski lead the Cougars in the distance events.

South Rowan is currently the county champ in cross country, and that crew came out for the track team. Noah Julian leads a distance group that should rack up a lot of points.

West doesn’t have the depth to challenge for the championship, but the Falcons may have the best athlete in the meet in hurdler/sprinter Jalen Houston, a perennial county champion.

West will be a factor in the relays and in the jumps with Elijah Graham and Jakari Gardner. Thomas Waldo leads the distance crew.

Salisbury is thin, but it has a handful of special athletes, including sprinter/jumper Tyrone Johnson and hurdler Christian Morgan.

North has a good thrower in Nautica Patterson.

Dynasties have been hard to establish since the first county girls meet in 1979.

No school has ever won more than four titles in a row (Salisbury, 1994-97), although South has enjoyed three different stretches when it won three straight.

Carson’s girls have won the last two titles. It will be a surprise it that min-streak is stopped today.

The Cougars have large numbers, and they frequently add several more top-notch athletes for the county meet if the soccer and softball teams aren’t in action.

Throwers Iyonna Parker and Nancy Gamewell, sprinters Mikaila Gadson and Malia Hughley, hurdler/sprinter Brianna Hargrove and jumpers Savannah Pless and Isabelle Jerman are leaders for the Cougars. Carson will be good in the relays and will score a lot of distance points with a group led by Kimberly Barrera and Megan Deal.

East’s Sprinkle sisters, Katelyn and Gracie, could go 1-2 in the hurdles. East has a strong young sprinter in Azaria Jones and an experienced thrower in Iyahnna Neal.

The other county teams are small.

West has an exciting 200 and 400 runner in Deja Phillippe. Tempest Robbins and Takiya Robbins will make the Falcons a factor in the relays.