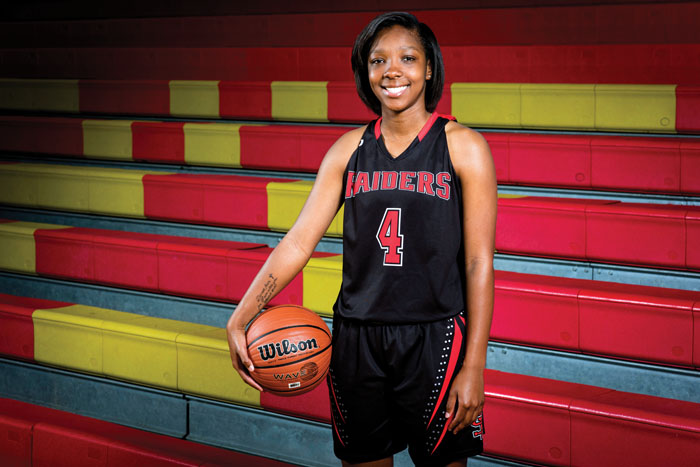 SALISBURY — It’s unusual for a 13-13 season to create excitement, but senior Janiya Downs made every South Rowan girls basketball game a topic of conversation.

The Rowan County Player of the Year put up points like no one has since the 1950s when rules were much different for girls basketball. Downs scored 52 points in a 76-72 win against North Davidson. That explosion was followed a week later by 53 in a 61-60 loss to West Davidson. Prior to those outbursts in tight games in which South needed every point, the county scoring record was 47 by Salisbury’s Shayla Fields.

Fields, a sharp-shooting guard who transformed Salisbury’s program before heading to N.C. State, was the only Rowan girl who had ever scored more than 43 in one night.

The 5-foot-11 Downs, who has signed with Catawba College, broke Fields’ county record for points in a season that was thought to be unbreakable. Fields scored 835 in 30 games in 2005 for a team that reached the regional. Downs broke that record in 26 games, pouring in 44 in South’s first-round playoff loss to R-S Central — to finish the season with 839 and to wrap up her career with 2,371 points, second all-time in the county behind Fields.

“It was a rebuilding season for us after losing the other four starters, and my team needed me to score when I could,” Downs said. “There were double teams and triple teams, but I couldn’t allow myself to get frustrated.”

This is the third time Downs has been the Post’s Player of the Year. She was a solo winner as a sophomore and shared the honor as a junior with Carson’s Olivia Gabriel. Also a standout in track and field and volleyball, Downs was the Post’s Female Athlete of the Year last spring.

Besides having virtually a new team on the court next to Downs, South adjusted to a new face on the sideline.

“Janiya has meant the world to me, she’s the reason I came to South, and I quickly found she was no different in school basketball than in AAU,” Ellis said. “She always competes hard and she has a very strong inner fiber. She’s coachable. She’s a player that if you ask her to do something she says, ‘I’ll go do it.'”

Even with Downs, South was only a break-even team, but the Raiders beat good ones in the Central Carolina Conference. South won at Ledford (23-7). South beat East Davidson (18-7) twice.

“When we won at East Davidson (on Jan.18), they hadn’t lost on their home court all year,” Downs said. “That showed what we could do when Madison (McGuire) and Bethany (Rymer) were making a lot of shots. My teammates were great all year on the defensive end. They gave everything they had, and we were able to knock off some people.”

Besides scoring at an unprecedented clip — 32.3 points per game — Downs accounted for 12.5 rebounds per game and 4.2 steals per game.

“And while she’s pretty quiet, I thought she was a very good leader for such an inexperienced team,” Ellis said. “She’s not someone who’s ever going to yell at a teammate, but she’ll go grab you by the collar and tell you what the team needs you do do.”

The second time through the CCC was tougher than the first.  Teams had a special defenses prepared for Downs for the rematch.

“The game would start and it would seem like there was no way we could get the ball to Janiya, but we usually found that if we went away from her and got some scoring from the other girls to loosen things up, then we could come back to Janiya and she would take it from there,” Ellis said. “She’s very talented on the court.  She has guard skills, but she’s also a very good scorer in the post and can stretch a defense. She’s a tough matchup because she has some size and she has some quickness.”

Chauncey Billups, who lasted 17 seasons in the NBA and was the MVP of the 2004 finals as a Detroit Piston, was a guard with a devastating post-up game. “Billups” became Ellis’ nickname for Downs.

Ellis enjoyed himself so much that he plans to return to coach South next year, even though it means driving from Greensboro to coach a Downs-less team.

“I’m excited about seeing what Bethany Rymer can become and seeing what Madison McGuire can add to her game,” Ellis said. “We have a lot of girls who can grow.”

Downs’ prodigious scoring totals led to assumptions that she was a gunner taking an absurd number of shots, but that was rarely the case. Downs connected on 51 percent from the field and 56 percent on two-point attempts. The 3-pointer is not her strong suit, but she sank a respectable 33 3-balls for 29-percent accuracy.

A major percentage of Downs’ points came at the foul line. She shot 218-for-328 for 66 percent. There were five games in which she shot 20 or more free throws, so she was attacking constantly.

South’s season started in rough fashion with a 43-31 loss to East Rowan. The Mustangs held Downs to 20 points.

In a Christmas tournament rematch, Downs scored 37 as South blew out East.

“The first time we played them, I thought Janiya probably tried to be too unselfish,” East coach Kevin Holland said. “The second time, she just decided to take over, and we didn’t have any answers for her.”

The three county teams that were significantly stronger than South — West, Carson and Salisbury — were well aware of South’s weaknesses and defended Downs better than anyone else.

Carson backed off Downs, took away the drive, kept her off the foul line and held her to 44 points in two games. Salisbury double-teamed her and held her to a total of 39 in two outings.

In a normal season, Salisbury senior Bryanna Troutman, Carson senior McKenzie Gadson or West junior Abigail Wilson might have been routine picks for player of the year. All three played with solid supporting casts and all three led their teams to excellent seasons. Carson and Salisbury reached the fourth round of the playoffs.

Troutman, a Wingate signee, sparked Salisbury to 25 wins and CCC regular-season championship, averaging 17 points, 11 rebounds, 3.5 assists, 4 steals and 3 blocks. She was voted conference player of the year by the league’s coaches. That league includes not only Downs, but Ledford’s brilliant guard Lyrik Thorne, who scored more than 900 points this season.

Wilson led the North Piedmont Conference, a very stout 3A league, in scoring (21.6 points per game) and rebounding (11.5).

And it would be hard to turn in a better season than Gadson, who signed with Anderson. Carson blew out a lot of people so her averages weren’t eye-popping (14.3 points, 6.3 rebounds), but she led a 27-3 team and was Christmas tournament MVP as well as NPC Player of the Year. She shot 53 percent from the field and will play in the East-West All-Star Game.

You can make a case for those three girls, but the historic numbers that Downs put up made her the choice of the Post’s sports staff.  Besides topping 50 points twice, she scored in the 40s five times and in the 30s seven times. In South’s last 16 games, she averaged more than 35 points per game.

Downs has received additional accolades outside the county.

She was on the N.C. Coaches Association all-district first team, while Troutman, Gadson and Wilson made the second team.

Downs was a unanimous pick on the prestigious Associated Press All-State team that was released last week. Only three girls were unanimous picks by statewide media.

Downs has a few more events coming up before she leaves high school basketball behind. She’ll be honored by the NCHSAA later this month as a “Performer of the Week” winner and she’s been selected to play in the East-West All-Star Basketball Game in July.

‘This was my most challenging year,” Downs said. “But it was my best year.”