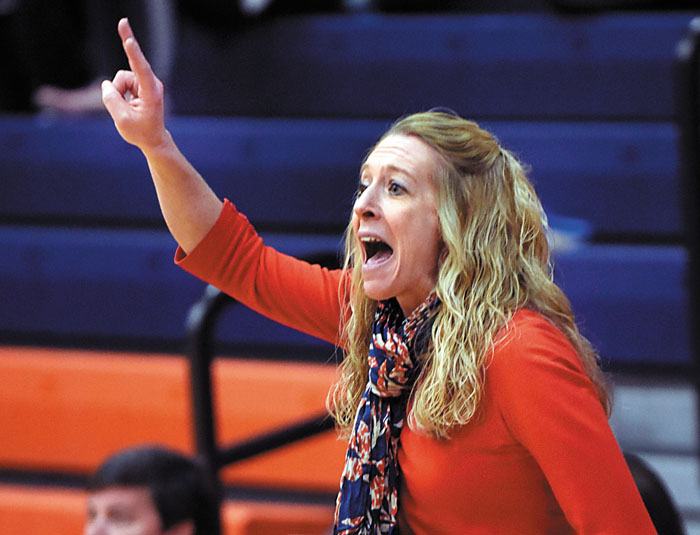 SALISBURY – It is very clear the Carson High School’s girls basketball program is built in the image of head coach Brooke Stouder.

The school opened in 2006 and 13 years later, Stouder is still the only coach the program has known. The progress in that time period has been remarkable. After struggling to a 4-67 record in the first three seasons, the Cougars have progressed to the point of becoming one of the top 3A girls’ teams in the state.

A year ago, Stouder was named coach of the year in the county with a school record 25-4 season. For an encore in 2018-19, the Cougars were even better with a new school mark of 27-3 and a four-game run to the Western 3A finals, one game short of a state championship berth.

In spite of the fact that all six Rowan girls’ teams had solid seasons, the selection of Stouder as the Rowan County Coach of the Year once again was a no-brainer. True to her nature, she gives all the credit and the glory to her talented players and her outstanding group of assistant coaches.

This past season’s team not only set the record for wins, but scored 62 points per game, tying a school mark, while giving up just 38 points per game, a new school record as well. The balanced and deep team also averaged 28 rebounds, 16 assists and 13 steals per game. As a result, Carson came out of the gate at 16-0, won its second consecutive Dale’s/Sam Moir Christmas tournament, then won its first outright North Piedmont Conference regular season championship by two games over nemesis North Iredell.

The only blip in the regular season was a pair of losses to Statesville, including the NPC Tournament championship game.

The state 3A playoffs followed and the Cougars rolled past Southern Guilford, Southwestern Randolph and Charlotte Catholic, reaching their first ever Western 3A finals. The dream ended with a 62-46 loss at Morganton Freedom (30-2).

“We ran into a Freedom team that had really good guards and really big post players,” Stouder recalled. “I knew that kind of team was going to be a real challenge for us and it was. But it was still a great season for us.”

The Cougars are definitely on an upward cycle now, especially with nine of their top 11 players returning next season. The ultimate goal still remains a state championship.

“It is my job not to mess that up,” Stouder says with a chuckle, “but anybody who has been coaching a while wants to win a state championship and I think we are taking steps in that direction. But it is hard and all the pieces have to fall in place in season.”

From a coaching standpoint, Stouder is now among the elite all-time coaches in the county for wins. Her 191-154 overall record places her third all-time behind Gary Atwell at North Rowan (199 wins in 16 seasons) and East Rowan legend Jesse Watson (320 wins in 19 seasons). Not bad for a young coach who came to Carson in 2006 with just a season as jayvee coach at South Stanly on her resume.

“It probably would have done me some good to be someone’s assistant coach for a few years,” she says with amusement. “But I have done it through trial by fire and also have tried to surround myself with people who know the game.”

She cites her assistants Dee Miller, Lu Gamewell (who coached her at East Rowan) and Chloe Monrow, one of her former players. “I feel like I have the best staff there is to have,” Stouder said. “There is no way we are as successful as we have been without them.”

Stouder also says she has learned a lot from Carson boys coach Brian Perry, as well as her brother Kurt Misenheimer, head boys coach at East Rowan. “It has been neat to throw ideas around with Brian and discuss different things,” she added. “Kurt and I talk a lot, too, and in fact, he gave me a sideline play that we run all the time.”

The Cougars will graduate two seniors this year — Nancy Gamewell and all-everything McKenzie Gadson, who Stouder calls “the heart and soul of our team.”

But, next year, Stouder will welcome back sharp shooting guard Colbie Perry (11.8 ppg), Lani Isley, Maci Cooper, Taylor Conrad, Ellie Wilhelm and Kary Hales, among others. But the key returnee could be be rising junior Karleigh Perry, who missed half of last season after suffering her second torn ACL knee injury in two years.

“When we lost Karleigh this past season, we lost a ton of rebounding,” recalls Stouder. “Plus, she was just so rugged and tough inside. She is working hard now and is going to come back to where she needs to be.”

This summer, Stouder will be an assistant coach in the prestigious East-West All Star game in Greensboro. Then a new season and a new team will get rolling. She has no plans to slow down or change her direction anytime soon.

“It is funny that it has been 13 years, because gosh, it goes by so fast.” Stouder concluded. “But as I have said before, I believe coaching and counseling students are my callings at this time of my life. It is a gift every day for me.”