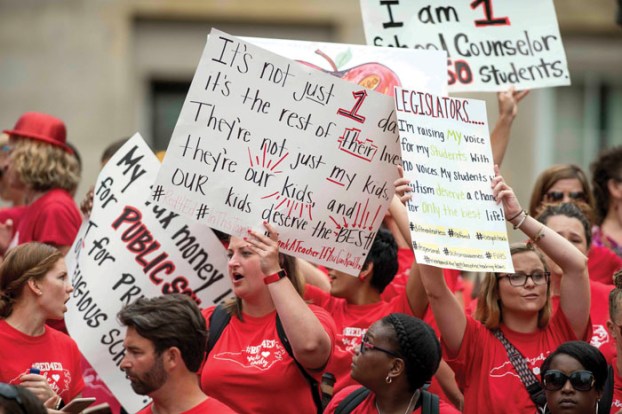 The marchers arrive at the State Capitol grounds during the 2018 teachers rally that drew a crowd estimated at 19,000. Jon C. Lakey/Salisbury Post

Officials with Kannapolis City Schools announced late Monday afternoon that they would cancel classes for the midweek rally, called the “Rally for Respect.” The day will be an optional workday for educators.

“Dr. Moody is in communication with administrators and principals to keep a pulse on what is happening in our schools regarding teachers requesting leave for May 1,” Rita K. Foil, the system’s public information officer, said on Friday.

The Rally for Respect is the second annual gathering organized by the North Carolina Association of Educators. Educators and their supporters will lobby for changes in public education. An estimated 19,000 took part in the first rally, held May 16, 2018.

Among them were a number of the 554 staff members for Rowan-Salisbury Schools who requested leave for last year’s march. That prompted school administrators to call off classes because they didn’t have enough substitutes.

As of Friday, Foil said, 89 staff members had requested leave for this year’s rally.

Kannapolis Superintendent Chip Buckwell said closing school was a difficult decision that ultimately came down to the lack of adequate substitutes. More than 100 Kannapolis district teachers have requested leave for the day.

“We know how important instructional time is,” Buckwell said, “and we know canceling classes on May 1 will be a hardship on many of our families. However, our first priority is always student safety.”

He said the school system does not have enough “qualified adults” — including approved substitutes or other staff members — to make sure classrooms are adequately supervised.

To address the hardship faced by families in need of child care for the day, Kannapolis City Schools has partnered with the Cannon Memorial YMCA to offer free and low-cost child care options.

Families of elementary students will be able to register for the Y’s Kid’s Day Out Program at a special rate of $20 for the day. Registration will open on April 24. A limited number of slots will be available.

Melessia Winborne, president of the Rowan-Salisbury Association of Educators and an English teacher at South Rowan High School, said she expects full support from the superintendent and school board as teachers look ahead to the rally.

Winborne, who attended last year’s rally, said it was “overwhelming for most who attended” and that no one expected the thousands in attendance. Last year’s crowd was estimated at 19,000.

Winborne is planning to attend the May 1 rally, joining others to lobby for a minimum $15 an hour wage for all school personnel; additional school support personnel such as counselors, psychologists and librarians; Medicaid expansion to “expand the health of students;” the reinstatement of master’s pay and higher-level pay; and reinstatement of state retiree health benefits for teachers hired after 2021.

“This is an important march for us to be able to put in our voice with the state legislature to let them know we are fighting for these basics rights and supplies,” said Winborne, adding that last year’s rally was a success despite a need for continued activism. “I think that there are a lot of pro-education representatives and senators out there, but I just don’t think they were aware of what our needs were. Seeing it on paper is one thing, but having so much passion and force in one area, they were finally able to see what we want and need.”

Kannapolis Superintendent Buckwell said these needs led to his respect for staff members who want to advocate for public education.

“The lack of per-pupil funding over the years has cost Kannapolis City Schools millions of dollars that could have been used to provide more teachers, counselors, and teacher assistants as well as more curriculum support and classroom supplies,” he said. “In addition, the pay raise given to teachers for this school year does not cover all teachers at all experience levels. Our most experienced teachers have been left out of pay increases.”

Rowan-Salisbury’s Moody also said she agrees with some of the issues and concerns behind the rally.

“We are hoping some of our teachers will be able to attend without affecting the safety of our schools,” she said.