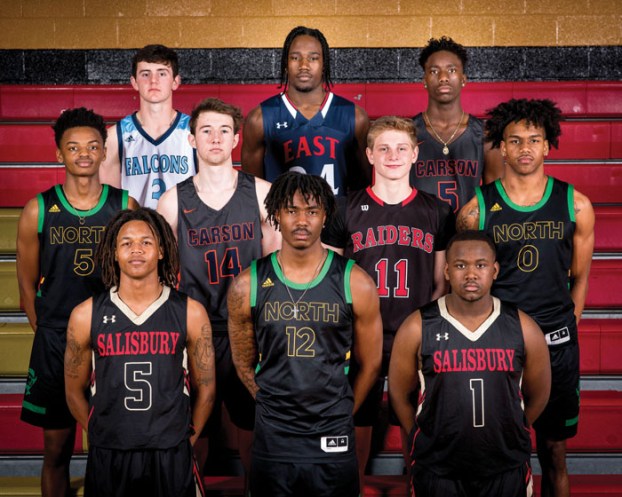 First team (6 players, tie for the fifth spot)
Dayjuwon Cooke, North, 6-4 Sr. — Rowan County Player of the Year averaged a double-double and provided lots of defense and leadership for the Cavaliers.
Brevin Goodlett, North, 6-4 Sr. — The county’s leading scorer (18.8 points per game) made himself an inside-outside monster by adding 3-pointers to his game. Yadkin Valley Conference Player of the Year.
Cameron Gill, Salisbury, 6-0 Sr. — Always a defensive whiz, he stepped up his offensive game as a senior and scored in double figures 13 times. East-West All-Star as football DB.
Elton Hooper, East, 6-7 Sr. — Had a few off games, but when he was on, no one was better. He averaged a double-double and topped 20 points nine times. Headed to Catawba Valley Community College.
Cole Perry, Carson, 6-4 Sr. — Made an amazingly quick comeback from summer ACL surgery. He debuted in Carson’s fifth game of the season and topped 20 points eight times,
Derrick Page, North, 6-2 Sr. — His modest scoring average (7.5 points per game) didn’t begin to tell the story about what he meant to a 28-3 squad. He orchestrated North’s offense and defense.
Second team
Payne Stolsworth, West, 6-1 Sr. — Always a dangerous shooter, he became a more aggressive and more athletic player as a senior. He led the Falcons with 16.3 points per game. Will play college football at N.C. Wesleyan.
EJ Clark, Carson, 6-3 Jr.— Amazing season for a first-year varsity player. He topped 20 points seven times, including a 31-point effort when Carson beat South Iredell.
Jarron Hines, South, 6-1 Sr. — A terrific shooter, he led the Raiders with 11.8 points per game.
Gabe Hinceman, East, 6-3 Sr. — Averaged a team-high 5 assists and scored 10 points per game for the Mustangs. Will play college football at Barton.
Jacquez Smith, Salisbury, 5-9 Jr. — Stocky shooter lit it up for the Hornets when he got on a roll. He had 18 points in the Christmas tournament championship game loss to Davie.
Honorable Mention
AJ Mauldin, Carson, 6-0 Soph. — Dynamic offensive player scored in the 20s four times.
Zack Brawley, West, 5-7 Sr. — No. 2 scorer for the Falcons had impressive offensive outbursts with pull-up jumpers, including 25 points vs. East Rowan in the Christmas tournament and 22 against Statesville on Senior Night.
Javon Smith, Carson, 5-10 Soph. — Came on strong in the second half and has a big future. He scored 23 in Carson’s last outing.
Kendrell Goodes, North 6-5 Soph. — Shot-blocker helped North hold opponents to 45.4 points per game.
Andrew Jones, South 6-2 Sr. — Athletic, three-sport guy, he scored in double figures seven times.
Gavin Sprinkle, East, 6-0 Soph. — Excellent shooter, he had games with 26, 19 and 18 points.
Quintous Smith, North 6-2 Sr. — Offensive stats weren’t huge, but his experience and toughness were big for the Cavaliers on their run to the Final Four in 1A.
Kevin Chawlk, Salisbury 6-0 Sr. — He was a surprise and was the difference-maker for the Hornets in Central Carolina Conference wins against West Davidson and East Davidson.
You Might Like