Eyes on the prize: Carson shuts out West Rowan, has sights set on league championship 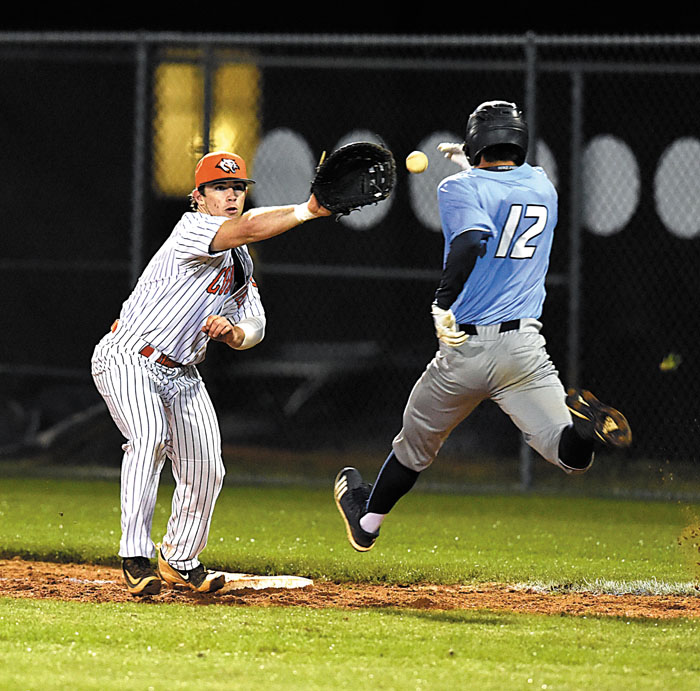 West’s Jake Perez was called safe at first base as Logan Rogers takes the throw. Photo by Wayne Hinshaw, for the Salisbury Post

CHINA GROVE — There’s a playoff race to run and Carson’s baseball team is running it.

The Cougars secured at least a tie for the North Piedmont Conference regular-season title Monday night with briskly played, 3-0 victory over visiting West Rowan. A victory tonight or Thursday against South Iredell would give Carson its second consecutive league championship.

“The guys have played with a little bit of a chip on their shoulder,” coach Chris Cauble acknowledged, shortly after Carson (16-2, 7-1) improved to 6-0 in April. “Everybody counted us out this year. They said we couldn’t do it again because we lost Owen White, we lost Maddux Holshouser, we lost Cam Prugh. They said there’s no way we could repeat.”

“Daniel had a good change-up and made a lot of good pitches,” West catcher JT Fecteau said. “There just wasn’t any help behind him. Offensively, we didn’t produce when we needed to.”

Hales, meanwhile, won his sixth game — largely by getting ahead and staying ahead. He threw first-pitch strikes to 18 of the 22 hitters he faced and limited West to four hits.

“I like getting ahead, but I’ll never put a fastball right down the middle,” he said. “I’ll go inside, outside, up or down. (Pitching coach Brett) Mulkey calls the pitches and I love the way he works. He’s always got hitters off-balance.”

Hales, a senior right-hander, worked out of bases-loaded jams in both the first and fifth innings. In the top of the first, West’s Jake Perez and Fecteau sandwiched walks around Durham’s hustle-double to left-center field. But the rally fizzled when Hales retired Payne Stolsworth on an inning-ending pop-up.

“Sometimes it takes a couple batters for a pitcher to adjust,” said Carson catcher Garrett Alewine. “He’s going from a bullpen mound to a game mound. But he settled in, like every pitcher does.”

Hales retired 12 of the next 13 West batters, then tiptoed through another minefield in the fifth. West threatened when successive hits by Daniel Sell, Perez and Steven Smith filled the bases with two away. But again Hales escaped when he induced Durham’s routine groundout.

“It’s frustrating when we get opportunities like that and can’t produce,” said Fecteau. “Give the pitcher credit. He commanded his off-speed pitches — his curveball in the beginning of the game and his change-up at the end.”

Carson jumped on Durham for a run in the last of the first inning and plated two unearned runs in the second. Hales opened the first with a sharp, groundball single to left and raced all the way home when teammate Luke Barringer lined a 1-2 pitch for a double to left-center.

“(Durham) just left it too high,” Fecteau explained. “Right where Luke wants it.”

An inning later, Wike legged out an infield hit and Alewine delivered a line-drive base hit to left. After Street reached on a two-out error, Hales  paddled a two-run single to right.

“Daniel had a good tempo,” West coach Seth Graham said after Durham fanned six batters and walked none. “And normally we play good defense behind him because he’s always around the strike zone and puts balls in play. He was bad early, which happens to a lot of pitchers. Once he establishes his release point and gets all three of his pitches to work, he’s fun to watch.”

Cauble agreed. “Durham pitched his butt of,” he said. “He didn’t give us anything and he pitched backwards the whole night. We kept thinking he was going to throw his fastball, but he never threw it. He just kept mixing in that curveball and change-up.”

By game’s end the Cougars had a hinge — but not a lock — on another conference crown.

“We keep hearing everybody talking about us,” Hales concluded. “I guess this proves we’ve still got something here at Carson.”

NOTES: The shutout was Carson’s fifth this season. … Cauble said Wike (4-1, 1.22 ERA), a senior right-hander, will start tonight’s game against visiting South Iredell. He worked a perfect sixth inning and struck out two last night. … The Cougars are unbeaten in nine home games. … West wraps up its NPC regular season with games at Statesville tonight and at home against the Greyhounds on Thursday.