All-county boys basketball: Dayjuwon Cooke is Player of the Year 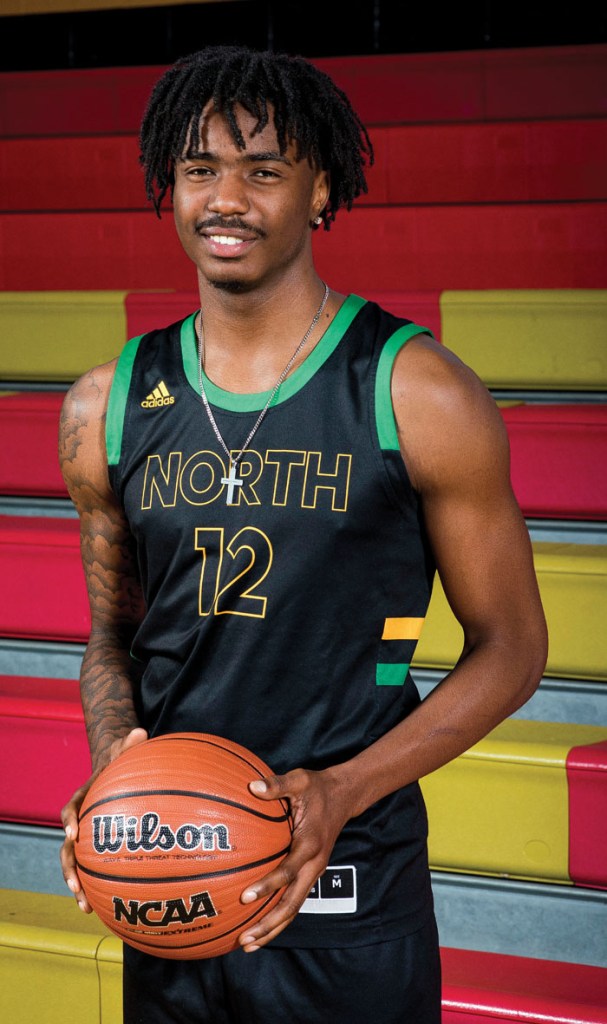 SALISBURY — Long and strong, Rowan County Player of the Year Dayjuwon Cooke played above the rim at 6-foot-4, but the explosive senior’s story is more about persistence than talent.

“This senior season was all good,” Cooke said. “I was playing with brothers, we stayed healthy, and we made a really good run to the regional final. When I heard I was player of the year I was shocked, to be honest. My only goals were to be the best leader I could be and the best player I could be.”

As a freshman, Cooke was basically a jayvee, making a handful of varsity cameos. As a sophomore, he scored 5.1 points per game as a contributor on a team that relied mostly on Joe Scott and Henderson Lentz.

As a senior, buying into everything new coach Jason Causby was selling, Cooke’s progress continued. He was an elite player, averaging 17.2 efficient points and 11 tenacious rebounds. He was a high-percentage option for the Cavaliers (28-3) — a 60-percent shooter on 2-point field goals. He was held to single digits only once in 31 games, and that was in a blowout win in which he sat down early.

“He was hungry and eager and he wanted do everything the right way,” Causby said. “That was from the first day that I met him.”

Cooke jumps so well that he could have coasted and still been a dominant player most nights in the 1A Yadkin Valley Conference, but he pushed himself to be outstanding. North Rowan’s coaching staff, North Stanly and South Stanly pushed him some more.

Causby brought unorthodox training concepts to the 1A school, after spending a season at 4A Mallard Creek. There was lot of in-season weight lifting. Cavaliers were sprinting up steps in the football stadium in the summer heat, long before the first official practice day on Halloween.

“The guys weren’t really sure what we were up to for a while,” Causby said. “But our leaders bought in to trying some different things, so everyone did.”

Cooke served notice that he’d made some strides on opening day. Playing against a rangy Northwest Cabarrus frontline, Cooke scored 25 points and led the Cavaliers to a 61-60 overtime victory.

He enjoyed a 38-point night at home against Uwharrie Charter, the most points a Cavalier had scored in a game since 1990. Almost all of those points were on dunks, stick-backs and free throws.

“All of it was in the flow of the game,” Causby said. “It’s not like he was looking for shots. We were kind of amazed he scored 38.”

Cooke scored his 1,000th career point as North won the Yadkin Valley Conference Tournament. Reaching that milestone looked like a serious long shot when Cooke entered his junior season with a modest 136 points. He finished his high school career with 1,090. He scored 534 as a senior.

“I just tried to take it hard to the basket, score or get fouled,” said Cooke, who has exceptional first-step quickness. “I tried to always run the floor hard, and if I got a defensive board I was always looking to push the ball.”

Undefeated at home, North pushed the ball well enough to score 66.4 points a game. The Cavaliers also were good at getting stops, putting up their best defensive numbers since the 2011-12 squad. North allowed 45.4 points per game. Cooke was a big part of that. He was hard to get around and hard to throw the ball over.

“He was very effective in trapping and playing pressure defense,” Causby said.

North had a 21-game winning streak when it was finally being stopped in the regional final in Hickory by eventual state champion Bishop McGuiness.

“We played that game in an arena, we were used to the shooting background in gyms, and we just didn’t shoot the ball well at all,” Causby said.  “And we had some sickness. Kendrell Goodes had full-blown case of the flu, and Brevin Goodlett was in the early stages of the flu.”

North’s final four games were all tough playoff contests. Cooke was North’s leading scorer against Union Academy, Hayesville and Community School of Davidson and shared scoring honors with Derrick Page in the loss to McGuinness.

That playoff performance helped separate Cooke from his teammate Goodlett as far as the Post’s player of the year voting. The two 6-4 bookends were neck-and-neck for the award all season. Goodlett, the Yadkin Valley Conference Player of the Year, scored even more than Cooke over the course of the season. He averaged 18.8 points per game.

At his size, Cooke will be making a transition to a full-time wing player in college, but he’s athletic enough and works hard enough to make that happen.

“He’s a tremendous young man, a good student, and it’s just a matter of him finding the right fit for a college program. He’s going to get the chance to play the game he loves at the next level. As a coach, that’s all you can hope for.”

As a teammate, Cooke also was all that you could hope for.

“When you look at Dayjuwon, the first thing you think about is his work ethic,” Page said. “That’s a guy who always put in the work.”