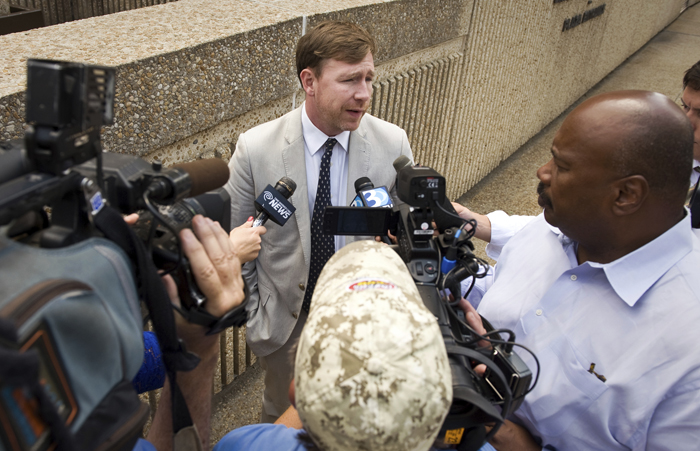 Chris Brook, legal director of the North Carolina ACLU, speaks to members of the media outside the Ward Federal Building in Winston-Salem in July 2014. North Carolina Gov. Roy Cooper announced Monday that he has chosen the top lawyer for the American Civil Liberties Union in North Carolina and the Democratic governor's chief prison administrator to fill two vacancies on the state Court of Appeals. Andrew Dye/The Winston-Salem Journal via AP

RALEIGH — Gov. Roy Cooper said Monday he has chosen the top lawyer for the American Civil Liberties Union in North Carolina and his own chief prison administrator to fill two vacancies on the state Court of Appeals.

The appointments of Brook and Young, which last through the end of 2020, move the court more leftward for now. They can choose to run for full eight-year terms on the November 2020 ballot.

Brook was involved in litigation successfully challenging a state constitutional amendment prohibiting gay marriage and seeking to overturn the state’s Republican-approved “bathroom bill,” as well as a replacement measure.

Brook also was the chief lawyer for the ACLU in a lawsuit filed by three Rowan County residents challenging the Rowan County commissioners’ practice of opening their meetings with a prayer. The lawsuit specifically focused on the commissioners’ ability to lead sectarian prayers and the manner in which the prayers were delivered.

Young joined Cooper’s administration in late 2017 to take over the state’s troubled prison system after the deaths of five workers in prison attacks earlier that year.

“The work of the North Carolina Court of Appeals must instill confidence in the people of our state, reminding them they live within a fair and just society,” Cooper said in a news release. “These appointees will bring extensive legal experience to their service on the court.”

Cooper, a Democrat, got to fill these spots on the 15-member court, which generally hears cases in three-judge panels, because of the departures Judges Mark Davis and Bob Hunter. Cooper last month elevated Davis, a registered Democrat, to the state Supreme Court to fill the vacancy created there when he appointed Justice Cheri Beasley to be chief justice. Hunter, a Republican, reached his age-mandated retirement date.

Young, who attended Howard University and N.C. Central University’s law school, has been well-connected to North Carolina’s last three Democratic governors. He served as chief legal counsel to Gov. Mike Easley. He was Gov. Beverly Perdue’s secretary of the Department of Crime Control and Public Safety, a predecessor of the current agency.

In her administration’s closing days, Perdue appointed Young as a special Superior Court judge. He presided in courtrooms until Cooper named him to succeed David Guice as chief deputy secretary on a temporary basis. The “interim” tag was never removed.

Brook, a University of North Carolina at Chapel Hill law school graduate, has no judicial experience. Previously an attorney for the Southern Coalition for Social Justice, Brooke became ACLU legal director in 2012.

Through the ACLU, Brook helped represent same-sex couples who sued in federal court to overturn North Carolina’s constitutional amendment limiting marriage to a man and a woman. Federal judges struck down the amendment in October 2014, after a similar Virginia ban was declared unconstitutional.

Most recently Brook has been representing transgender people who sued over the 2016 law known as House Bill 2 and later the replacement 2017 law. A federal judge in October let the lawsuit continue, saying there’s evidence the plaintiffs are being harmed by a prohibition on new local antidiscrimination laws.