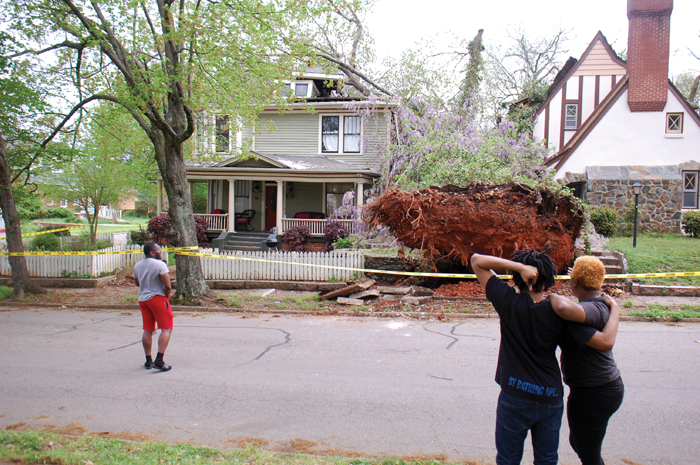 Mark Wineka/Salisbury Post Mikela Hyche, right, one of the residents of the historic Lash Family Home at 530 W. Monroe St. (on the corner) surveys the damage caused Sunday evening when an aging oak tree fell and caused considerable damage to 526 and 530 W. Monroe St.

The fallen tree caused the heaviest damage to 530 W. Monroe St., which is owned by Cliff and Barb Sorel. One of the tenants, Mikela Hyche, said her parents, brother and 3-year-old son also live in the house.

The American Red Cross worked to provide the family with a hotel room Sunday night.

Hyche said the tree, which the Sorels reported belonged to the 526 W. Monroe St. property, heavily damaged the upstairs, along with the kitchen and laundry room downstairs. Hyche reported to her job at Buffalo Wild Wings at 4:30 p.m., and she said the tree fell at about 5:30 p.m.

“My son was in a room it crashed in,” Hyche said of her young boy, who was napping downstairs at the time the tree fell. Windows were broken in that room, she added.

Hyche said the family has lived in the historic home at the corner of West Monroe and Caldwell streets about five years.

“I know the whole upstairs is gone,” she said.

The Sorels were on the scene as crews from the Salisbury Fire Department made sure the house was secure. Cliff Sorel said “there’s a ton of historic preservation that went into” the house at 530 W. Monroe St.

Jack and Maria Thomson had restored the house in 2006-07, while Jack Thomson was managing director of Historic Salisbury Foundation. He later left for a job in Asheville.

The Sorels said the house has its original floors, tile, mantels and mirrors.

The Rev. Lash founded several Lutheran congregations in Rowan County. He was minister of the African-American St. John’s in Salisbury and also operated the church’s parochial school.

The couple’s son, Wiley I. Lash, owned and lived in the house at 526 W. Monroe St. He served as mayor in the 1980s. Before that, he played an integral role in the desegregation of local businesses and public schools.