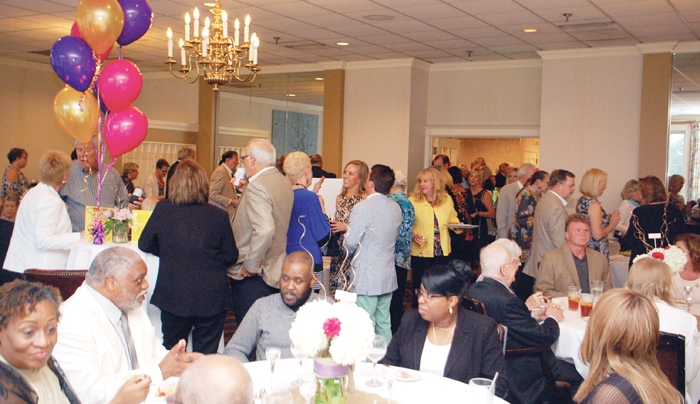 Mark Wineka/Salisbury Post This is just part of the crowd of roughly 300 people who attended Saturday night's Pass the Plate fundraiser for Rowan Helping Ministries. The event, held at the Country Club of Salisbury, included dinner, music, a silent auction and casino.

SALISBURY — Supporters of Rowan Helping Ministries symbolically passed the collection plate Saturday night as more than 300 people gathered for the nonprofit’s biggest fundraiser of the year.

“This year, we’re trying to make that target or higher,” said Wivianny DeHaas, who co-chaired Pass the Plate with Noel Adams. The co-chairs were helped greatly by 11 other people on the planning committee.

The evening included eats, a silent auction, both live music and a DJ, a casino, dancing and professional photo opportunities.

During the evening, organizers took time to present an actual dinner platter and three dinner plates, painted by Rowan Helping Ministries guests who depend on the organization’s services such as the shelter, crisis assistance, food backpacks, life coaching, transitional housing and more.

“Food Lion has been wonderful in supporting us with this event,” DeHaas said.

The plates, many with inspirational quotes included, went to diamond sponsors ($7,500 or more) Wink and Christy Cline, Ryan and Wivianny DeHaas and Novant Health.

Some of the other major donors included sapphire sponsors Greg and Missie Alcorn, Gwin and Matt Barr, Deborah and Dyke Messinger, Amy and Cliff Ritchie and Alice and Fred Stanback.

While many folks gave more than the $60-a-person ticket price, DeHaas liked the idea that the evening was reasonably priced so many could attend. Pass the Plate also is aided immensely by the silent auction items that are donated by individuals and businesses.

“This is an event for everyone in the community,” DeHaas said.

She said a special emphasis this year is encouraging a younger generation to become more involved in RHM’s work. DeHaas said she personally tries to support several causes in the community.

“This is the one really dear to my heart,” she said.

The silent auction items touched on just about everything — from Correll Farms’ three weeks of fresh vegetables to Distinctive Naturescapes’ fire pit.

There also were vacation packages to places such as Myrtle Beach and Clement Family Mountain in Avery County.

One auction package provided a dinner at La Cava and two tickets to Lee Street theatre.

‘Somebody should have noticed, but they didn’t’: Sandusky’s adopted…