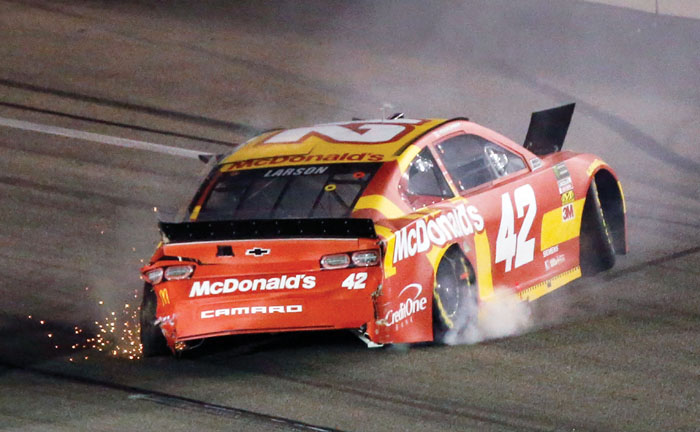 Kyle Larson backs his car down the track after he spun during the NASCAR Cup series auto race at Richmond Raceway in Richmond, Va., Saturday, April 13, 2019. (AP Photo/Steve Helber)

Truex gave Joe Gibbs Racing its sixth victory in nine races this season and won for the first time in his career on tracks shorter than a mile.

Truex regained the lead for the last time after green-flag pit stops that started with just more than 80 laps to go. With about 40 to go, Bowyer nearly caught him, but Truex never let him pass and finally, Bowyer relinquished the second spot to Joey Logano, who seemed to have the faster car of the top two.

But Truex expertly navigated lapped traffic and never let him pass to win for the first time in 81 starts in the Cup series on a short track. It’s his 20th career victory and 17th in the last four seasons.

“It means a lot to finally break through,” Truex said in Victory Lane. “I hope it was a helluva show. It sure was fun behind the wheel.”

The leaderboard got shuffled beginning on Lap 318 when the cars running up front began pitting under a green flag.

When they all had new tires and enough fuel to finish, Truex was back in front, followed by Bowyer, Logano, Harvick and Hamlin. Brad Keselowski dropped to eighth during the cycle and Kyle Busch, seeking his third victory in a row on the 0.75-mile, D-shaped oval, his fourth of the season and second in a row, fell back to 10th.