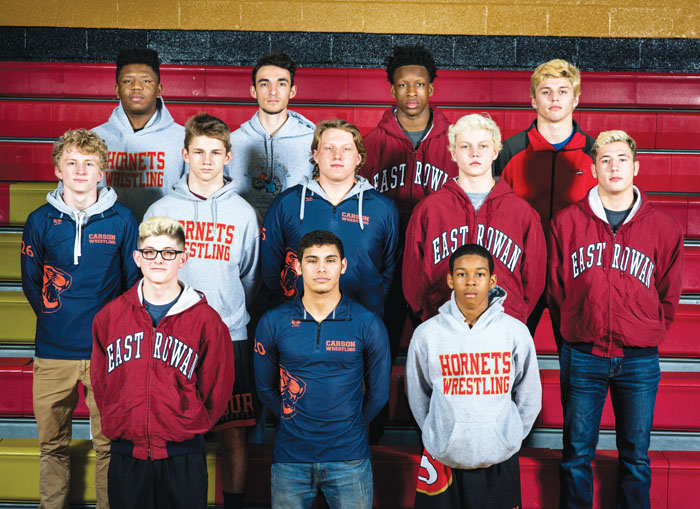 SALISBURY — Josh Vega remembers it started with a friendly wager.

He and an eighth-grade mate were restless teens in the fall of 2014,  bundles of athletic energy seeking an outlet, busying themselves outsmarting popular video games. That’s when fate intervened.

“Wasn’t doing much of anything,” recalled Vega, a Carson senior with soft, smiling eyes. “To this day, my dad still doesn’t know how I got into wrestling.”

Now it can be told. Rowan County’s Wrestler of the Year began a prolific journey by taking a daring, first step.

“It started with a bet,” he said, chuckling at the thought. “Me and a friend were playing a game, Madden X-Box, just killing time. So I made him bet me — if I win the next game, we join a sport of my choosing. If he wins, we don’t do anything. I beat him by one point.”

Kid’s stuff, right? Except that it launched a prep wrestling career that touched nearly every square on the board, culminating with a second-place finish at 113 pounds in February’s 3A state individual tournament. Along the way, Vega recorded 106 career victories and became the second Carson wrestler to capture four first-place ribbons in the annual Rowan County tournament, etching his name beside Cameron Mayfield’s in school lore.

More glamorous distinctions soon followed. He placed first in the North Piedmont Conference tournament, second in the Midwest regional and on March 12, was named winner of the coveted Dutch Meyer Award, presented yearly to Rowan’s top wrestler as voted by the coaches. “A great accomplishment,” he said. “And a bigger surprise.”

First-year Carson coach Brandon McCarty knows why. “I think he just decided to give that little extra push this year,” he said. “He was determined to put in the extra time at practice, the extra work it takes to go from being a third- or fourth-place finisher to a champion. He dedicated himself to wrestling.”

A four-time state qualifier and two-time place-winner, Vega went 35-9 this season, despite a less-than-spectacular start. He suffered losses in each of Carson’s first two weekend tournaments.

Sometimes falling on your face is a way of moving forward. Vega responded by plowing through the county tournament and the NPC regular season. In the regional final in early February, he suffered a 4-3 loss to host Piedmont’s Tripp Collins in the 113 final, but easily locked down a berth in the state meet. There he won three matches before stumbling, 5-3, against Collins in the finals.

“He was very tactical, very technical,” said Vega. “He had a lot of strengths and he comes from a great wrestling family. His cousin (Josh Blatt) was a three-time state champion, so I knew I’d be in for a fight.”

It’s been a fight that’s impressed more than a handful of collegiate recruiters. Vega hopes to study psychology in college and eventually enter the ever-expanding mental health field.

“To me, it doesn’t really matter where I wrestle,” he said. “I’m more about, ‘Are the academics good enough?’ and “Can they offer some money?’ Wrestling still comes behind all of that.”

Vega, at 5-foot-3 and quick as a mongoose, understands he may never wrestle competitively again.

“Wrestling in college, that may or may not happen,” he said with a pensive grin. “It’s never a guarantee. But look how far wrestling has taken me — and this may only be half way.”

Of course, there was nothing half-way about that adolescent challenge he offered an eighth-grade classmate.

“It started with a bet and turned into more,” he said. “I fell in love with wrestling — and here I am.”