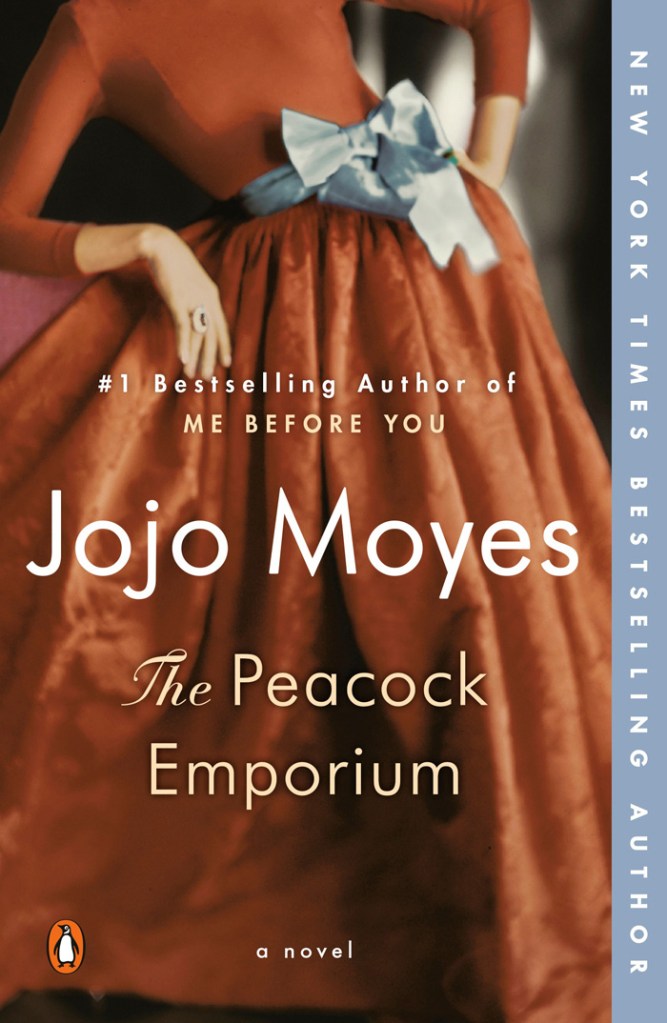 Caveat Jojo Moyes fans: If you’re all about Lou and the bumblebee tights Will gave her, you won’t find any of that whimsical pathos in “The Peacock Emporium.” Moyes’ novel has more in common with her “The Ship of Brides” than it does with “Me Before You” and its connected novels “Still Me” and “After You.”

Crammed with characters, storylines and detail, the novel starts out with 1960s golden girl Athene Forster, who’s referred to as “the Last Deb” by people concerned that “there’s going to be no such thing as the Season soon.” Unfortunately, Athene lacks the wisdom of her namesake goddess, and within two years of marrying the aristocratic Douglas Fairley-Hulme (poor Douglas, all I could think was “barely human”) she’s run off with (sniff) a salesman. That’s all anyone knows about what happened to her. Almost.

Fast-forward to 2001 and Suzanna Peacock, Athene’s daughter, who has just returned grudgingly to her hometown of Dere Hampton, where she was raised by Douglas’ second wife Vivi. But Vivi and Suzanna are not speaking, for reasons that remain a mystery to the reader. At loose ends, Suzanna decides to open the Peacock Emporium, a somewhat slapdash, rather mad gathering place that sells everything from her own castoff costume jewelry to a decent espresso. Moyes has told interviewers that her own hometown coffee shop inspired the book, a winsome detail that will no doubt have more than one woman running to check out business-zoned real estate in her own town.

Moyes doesn’t let readers get to know Suzanna any more than she lets them sink into Athene’s story. On the plus side, the author clearly doesn’t want to focus on frippery. She’s after something bigger. That something bigger, however, involves yet another story: that of a lonely Argentinian midwife, Alejandro, who works at the hospital and bonds with Suzanna over their shared love of good coffee.

You could write an entire novel about Suzanna’s family story. And maybe one about Alejandro’s as well. But remember, we already have the mysteries of what happened to Athene and why Vivi is estranged from Suzanna. Not to mention the sad tale of Suzanna’s deputy in the shop, Jessie. Are you confused? You’re not alone. The action moves from continent to continent and decade to decade more and more feverishly.

For these characters, things are out of control. It will take the help of a community to allow Suzanna and Vivi to untangle the falsehoods keeping them apart. At the book’s end, some readers may feel that it’s Suzanna’s story, and perhaps it’s meant to be. One of my quarrels with “The Peacock Emporium” is that, at the end, I wanted more of Athene’s story, which felt more emotionally profound given her culturally inhibited choices. But I wouldn’t have minded a story entirely about Alejandro, either. Moyes has tons of material. Perhaps in her next novel she’ll use it to more satisfying effect.