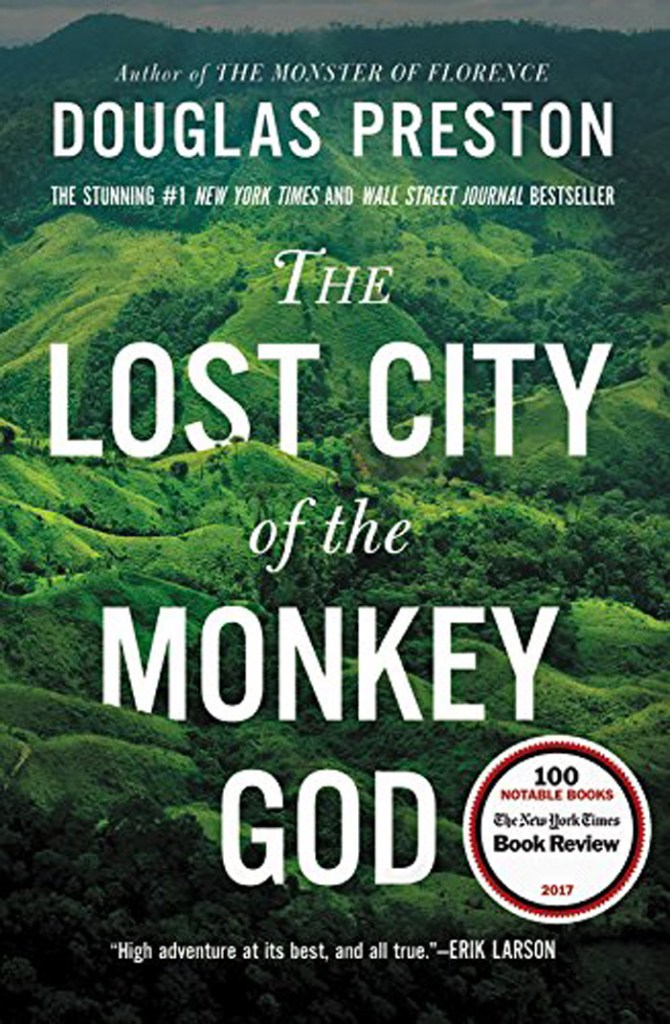 “The River of Doubt: Theodore Roosevelt’s Darkest Journey,” (2005) by Candice Millard, a former writer and editor for National Geographic. The book was a winner of a Notable Book Award from the New York Times in 2005. In 1914, Theodore Roosevelt led a group of explorers, including his son Kermit, deep into an unexplored region of the Amazon River. The book recounts the hardships they faced on their trip down the River of Doubt.

“The Lost City of Z: A Tale of Deadly Obsession in the Amazon,” (2009) by David Grann, is an ALA Notable Books-Nonfiction: 2010 award-winner and was made into a movie by the same name in 2017. Follow writer  Grann as he follows in the footsteps of British explorer Percy Fawcett, who disappeared while on an expedition to find an ancient city in the Amazon in 1925.

“The Gold of Exodus: The Discovery of the True Mount Sinai,” (1998) by Howard Blum. Blum is a former New York Times journalist who writes the story of how two adventurers, Larry Williams and Bob Cornuke, made discoveries at the mountain in Saudi Arabia known as Jabal al Lawz that this was the actual location of the biblical Mt. Sinai.

“Jungle of Stone: The True Story of Two Men, Their Extraordinary Journey, and the Discovery of the Lost Civilization of the Mayans,” (2016) by William Carlsen. Carlsen is a former San Francisco Chronicle journalist who reveals the tale of John Lloyd and Frederick Catherwood and their discovery of the ancient Mayan empire.

“The Last Wild Men of Borneo: A True Story of Death and Treasure,” (2018) by New York Times bestselling author Carl Hoffman. In this book, Hoffman writes the stories of two different men, Bruno Manse and Michael Palmieri and the impact their lives had on the island of Borneo.

Spring Fever Scavenger Hunt: Headquarters, through April 30. It’s time to beat the winter blues and see how everything comes to life in the spring with a scavenger hunt in the children’s room. Children who complete the scavenger hunt will be entered into a contest for a prize. For more information, call 704-216-8234.

Who Was?: East, through April 30. Can you recognize famous scientists from their picture? This scavenger hunt features our popular Who Was series. Find them all and be entered into a contest for a literary-themed prize. For more information, contact Tammie at 704-216-7842.

Chapter Chats: East, April 16, 5:15-6 p.m. Weekly book club for teens 14-17, intended primarily for participants with developmental or intellectual disabilities, though all are welcome. For more details, contact Tammie at 704-216-7842.

Makerspace DIY: 3D Printing, headquarters, April 18, 3:30-5 p.m. Learn how to make a design using 3D modeling software. Participants will use Tinkercad to design a 3D model and be able to print their creation during our open sessions. Sessions are available for people of all ages. Please register online, by phone at 704-216-8242, or by emailing Amber.Covington@rowancountync.gov.

A Marvel-ous Week: East, April 22-26. Enjoy a Marvel Avengers movie marathon before the next installment of the Infinity War movies opens in theaters.

Each screening is open to the public, and all ages are welcome. An adult must accompany children under 13. For more details, call 704-216-7842.

Literacy: Call the Rowan County Literacy Council at 704-216-8266 for more information on teaching or receiving literacy tutoring for English speakers or for those for whom English is a second language.