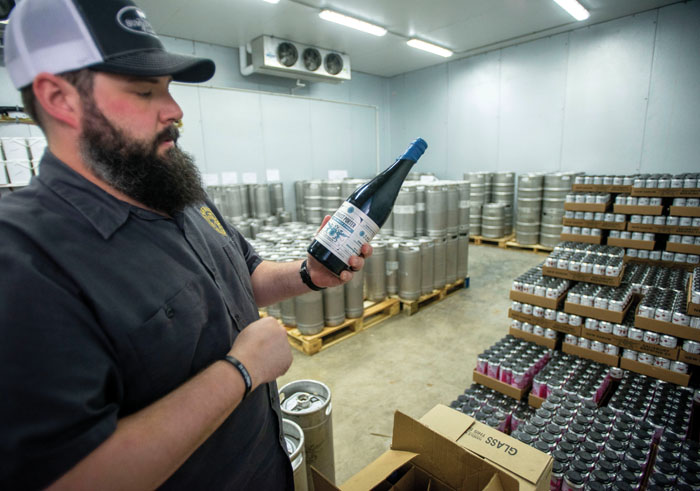 JON C. LAKEY/SALISBURY POST Brewmaster Andy Maben shows off a chilled bottle of Roundhouse Robust Porter as weel as the burnt orange AnniBEERsary T-shirts. New Sarum Brewing Company in Salisbury is set to celebrate their third year in business on Saturday during the 3rd AnniBEERsary Party at the popular brewery and tap room. Salisbury, NC 4/12/19

Since it opened, the brewery has had major accomplishments: creating award-winning beer, selling in Food Lion stores across the state and providing a sense of community.

All in all, said Andy Maben, the co-owner and head brewer, the staff is thanking its lucky stars.

“If there weren’t so many people that supported our brand, which means New Sarum, we wouldn’t have been here,” Maben said. “I’m a really, really lucky guy that the stuff we brew, as a New Sarum team, people like the beer.”

Maben said the brewery has been through ups and downs through the years and the staff has tried new techniques. All the hard work pays off when someone purchases a New Sarum beer, he said.

Going forward, Maben hopes New Sarum can remain relevant as more breweries pop up and people look for new flavors to try. He said there is a constant search in craft brewing. It’s not an end-all, be-all beer but maybe one that brings back old-world beers while pushing the envelop to create a new product.

Gose is an old world beer from Germany that has become popular in the past year.

Pink Cheeks was a challenge for the brewery to create a beer that is similar, if not perfectly matched, to the flavor profile of a wine, Maben says. The Rose Gose was a push to make something that tastes high-brow.

“Spirits and wine are held at such high esteem, and for some reason people associate beer with being low brow. But it’s not,” Maben said. “It’s meant to be paired with food. It is a very elegant beverage as much as whiskey or bourbon or chardonnay or cabernet.”

He said coming up with beers that everyone can enjoy is always a consideration for brewers.

“We need to come up with some really cool things that are balanced, that are crafty but at the same time people that aren’t into the craft beer movement can still enjoy,” Maben said. “It’s a delicate tightrope balance, but I think we’re doing really good at it.”

“When you’re in close quarters with somebody else brewing beside you that has their own sort of essence of how they do things, you’re going to pick up on some new techniques that maybe work for you or a new ingredient you never thought about using, or using a malt or hop that you never considered using,” Maben said.

He enjoys the camaraderie among brewers, saying they speak the same language.

“It’s supposed to be about breweries working together,” Maben said. “Sometimes it gets lost in the mix because it is business.”

Maben said one of the changes in the craft beer business is the decline of brand loyalty. He said although people still enjoy a New Sarum beer, they’re not sticking with the same type of beer. New Sarum’s best-selling beer, Blood Orange Wheat, is not as popular as it once was.

New Sarum is concentrating on staying in the spotlight as a great craft brewery.

“We’re up for the challenge, and we want to stay around as long as people are drinking beer,” Maben said.

“We don’t do it because we want to have a cool space and sit around and drink beer by ourselves,” he said. “Beer is community.”